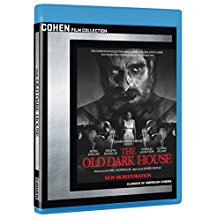 Director James Whale and horror icon Boris Karloff teamed up for one of the most memorable horror films ever made when they filmed Universal’s atmospheric classic Frankenstein in 1931. Just four years later they reunited for one of Hollywood’s best sequels in Bride Of Frankenstein. Lost in these legendary tag-team efforts, and nestled nicely between the two films, one finds 1932’s The Old Dark House. That film launched a horror sub-genre that continues to this very day: the Haunted House movie. The film also stared future Titanic survivor Gloria Stuart. It was one of the first films the actress ever made when her career started that very same year. In a rather nice coincidence the film also stars the man who married the Bride Of Frankenstein Elsa Lanchester, Charles Laughton in his American film debut. It’s an historic film, to be sure. But it’s also a bit of a forgotten gem. Due to rights issues, the film disappeared in the 1960’s when William Castle delivered his remake. It was absent from the Universal packages sold to independent stations for their weekend “creature features” in the 60’s and 70’s and was all but lost for a few years. Now Cohen Entertainment delivers the film on Blu-ray, and just in time for Halloween and our 31 Nights Of Terror. Will the coincidences ever cease?

It’s a torrential rain with landslides making roads impossible to navigate. Those are the circumstances that find three travelers at the doorstep of an isolated house to seek shelter from the storm. The travelers are Penderel (Douglas) and his married couple friends Phillip (Massey) and Margaret Waverton (Stuart). Things take an immediate ominous turn when the door is opened slightly to the deformed face of the house’s butler Morgan (Karloff). They are welcomed inside where they meet the masters of the house the bickering Femm siblings Horace (Thesiger) and Rebecca (Moore). They are reluctantly allowed to stay, but “no beds!” Soon they are joined by another pair of travelers. Enter Sir William Porterhouse (Laughton) and his young, attractive companion Gladys, played by Lillian Bond.

There isn’t a plot, per se, in the film. It’s an atmospheric piece where James Whale delivers his wonderful ability to work with and in shadows. The travelers spend some time getting to know each other. That’s particularly true of Gladys and Penderel, who find a romantic connection. Boris Karloff is used as somewhat of a red herring as the malformed butler who becomes violent when drunk. He does a bit of chasing around, but the real shadow in the night is hidden Femm brother Saul (Wills). He’s as deranged as his siblings appear to be. In a bit of a playful discovery, we meet the bedridden father of the Femms, played by the actress Elspeth Dudgeon. There are many light moments here, and the film has often been called a horror/comedy.

Ernest Thesiger steals the film in much the same way he did as the eccentric Dr. Pretorius in Whale’s Bride Of Frankenstein. James Whale had a group of actors that were close friends and appeared often in his films. Both Gloria Stuart and Ernest Thesiger joined Boris Karloff in that company. You can already see the beginnings of the Bride character in Horace Femm, and Thesiger’s voice is an interesting one that works well within the eerie atmosphere of the film. While there are no real haunts to speak of here, the film relies completely on Whale’s use of shadow to deliver any real chills. Karloff shows once again that he doesn’t require dialog to provide a strong presence. His character, like the original Frankenstein’s Monster, is mute. There are a few homage moments, most notably when the Gladys character screams, “He’s alive! He’s alive!” Thesiger delivers a line he will repeat later in Bride, referencing his love of gin.

The film was rescued by James Whale’s friend in later life, director Curtis Harrington. He made it a priority to restore the film when he first came to Universal in the 1960’s, and even though the film had zero commercial value, because of the rights issues, he managed to get a lab to restore the film at no cost. It was once considered a lost film and would have likely remained so forever if not for that effort. Finally, home video took advantage of the rights issue’s resolution to bring the film to the world once again. Now it stands as an important film for most of the people involved.

The disc contains an interview with Karloff’s daughter Sara. She’s a friend who has also spoken to us on the record here at Upcomingdiscs. There’s also a vintage interview with Harrington describing his relationship with James Whale and his restoration effort. This is a quality transfer and should find its way into any classic horror fan’s film library. If only I could talk to the likes of Karloff, Whale or Thesiger now “To thank them for the health and prosperity and happiness granted to this family, for its years of peace and plenty, to thank them for having created Rebecca Femm, and Roderick Femm, and Saul…”

Gino Sassani is a member of the Southeastern Film Critic's Association (SEFCA). He is a film and television critic based in Tampa, Florida. He's also the Senior Editor here at Upcomingdiscs. Gino started reviewing films in the early 1990's as a segment of his local television show Focus. He's an award-winning recording artist for Omega Records. Gino is currently working on his 8th album Merchants & Mercenaries. Gino took over Upcomingdiscs Dec 1, 2008. He works out of a home theater he calls The Reel World. Favorite films: The Godfather, The Godfather Part II, The Body Snatcher (Val Lewton film with Karloff and Lugosi, not the pod people film), Unforgiven, Gladiator, The Lion King, Jaws, Son Of Frankenstein, The Good, The Bad And The Ugly, and Monsters, Inc.
Breathe (2017) Tuesday Round Up: October 24, 2017