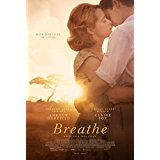 Andy Serkis is mostly known for pioneering the industry of motion capture performance. Most of you may not know that he’s worked a bit behind the camera as well. He’s led a few second units as director but had not actually directed a feature film. Breathe is his first effort, and while it has some truly nice moments, it looks like a first effort. I have no doubt that Serkis will be eventually demand notice as a director. He demonstrates an incredible base of knowledge when it comes to filmmaking. He certainly understands how to make an emotional connection with characters that aren’t really there. The skills are evident. But I suspect Breathe won’t be called upon in a future list of Andy Serkis masterpieces.

Robin Cavendish (Garfield) is an active adventurer who revels in physical activity, whether it be tennis or hiking in Kenya. He meets and marries Diana (Foy), who shares his adventurist life. They live a rather idyllic life until Robin is diagnosed with polio and given a short time to live. At first he falls into the expected depression and suicidal thoughts, but Diana manages to inspire him to make something of his life in spite of the terrible diagnosis. His friend Teddy (Bonneville) is a skilled engineer who develops a chair that offers more than just mobility. It has the respiration equipment he requires. Robin uses this new mobility to again travel and have adventures where he eventually becomes an inspiration and advocate for others who are disabled. He ends up living longer than anyone predicted.

Of course, this is an emotional story, but I’m not sure these are the folks who should have been telling it. I’m not talking about the cast. Andrew Garfield continues to impress in his post-Spider-Man career. He’s very good here and pulls us into this character’s world and emotional rollercoaster. Claire Foy as Diana is also strong. The two very swiftly develop a comfortable kind of chemistry that drives the personal journey forward. The real problem starts with a script that relies too much on the mellow drama. Perhaps that’s to be expected. You see, the couple has a child named Jonathan. The producer of the film is that self-same Jonathan Cavendish. He’s apparently a very dear friend of Andy’s, and that puts both of them rather too close to the material. Imagine, if you will, trying to make a film about your parents. You obviously become a rather unreliable narrator, and when it’s directed by a close friend, his voice rings even less reliable. It’s not that I don’t believe them; it’s that I felt like some of the story is missing.

One of the missing elements is the courtship and early relationship of the two leads. It’s rushed so that the film can get to the subject matter, but it hurts the film’s ability to bring us closer to these characters. Yes, the actors did a fairly good job, but they are often left with missing pieces that become more obvious as the film rolls along. There are inside moments that certainly Jonathan knows intimately, but he forgets that we don’t. In the end I relied too much on Garfield’s performance to tell the story…and he almost pulls it off flawlessly on sheer acting alone. But I wanted to see more than the remarkable moments. Yes, the film deals with Robin’s depression, but then it’s all about courage and will. I wanted to see the moments inside the relationship, and no one on this film was willing to provide it. The couple and their incredible achievements end up ringing too perfect. Heroes need to have flaws, or we can’t relate to what they achieve. A good film might have been better or even great with just a few revealed flaws. I’m sure that screenwriter William Nicholson felt a presence looking over his shoulder with every word he wrote. The man worked with John Logan to write Gladiator, so he’s capable of a well-balanced script. But he only had what Jonathan Cavendish was willing to provide. There’s another lesson in there somewhere. “Maybe some other time.”

Gino Sassani is a member of the Southeastern Film Critic's Association (SEFCA). He is a film and television critic based in Tampa, Florida. He's also the Senior Editor here at Upcomingdiscs. Gino started reviewing films in the early 1990's as a segment of his local television show Focus. He's an award-winning recording artist for Omega Records. Gino is currently working on his 8th album Merchants & Mercenaries. Gino took over Upcomingdiscs Dec 1, 2008. He works out of a home theater he calls The Reel World. Favorite films: The Godfather, The Godfather Part II, The Body Snatcher (Val Lewton film with Karloff and Lugosi, not the pod people film), Unforgiven, Gladiator, The Lion King, Jaws, Son Of Frankenstein, The Good, The Bad And The Ugly, and Monsters, Inc.
The Good Place: The Complete First Season “31 Nights of Terror” The Old Dark House (Blu-ray)