Soul on a String

Posted in: No Huddle by Dan Holland on November 3rd, 2017 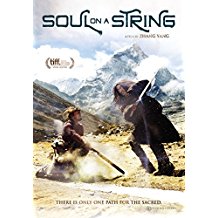 Soul on a String is the latest from director Yang Zhang, a very methodical filmmaker from Beijing, China. Now, I say methodical for two reasons: he’s been making films since the late 90’s and has only released a total of nine, and the ones I have seen are very slow-paced, but absolutely deliberate when paying attention to narrative, editing, and cinematography. To be fair, I have only seen two of his films. My first exposure to his work was in graduate school, as one of my colleagues who came from China invited me to watch Zhang’s 2005 film, Sunflower. Where I had some solace in recognizing the lead actress, Joan Chen (from Twin Peaks, of course), I was very surprised at how much I enjoyed the intense and complex emotions that the narrative drew out of me. Now, a few years later, Zhang managed to captivate me once again, only this time through his appreciation for cinema as an art, as well as his respect for the grand locations he captures with his camera.

The narrative follows Tabei, a man brought back from the dead to fulfill an important spiritual mission: return a sacred jewel from whence it came. Having been resurrected and encouraged to turn his life around by a monastery of monks, he agrees to begin this journey. However, no adventure is without its pitfalls. Two sons of a man Tabei killed long ago are of age to seek revenge for their father, so they begin pursuing Tabei, challenging him at every chance they get. Also, a group of bandits have heard of this sacred jewel being discovered in the area, and they begin to pursue Tabei for its value. Along the way, Tabei also picks up a lover, who in turn shows empathy for a mysterious child, creating an almost instinctual sense of protection that compels Tabei to complete his mission.

In many ways, I’d consider Soul on a String Zhang’s first attempt at an epic. At two hours and twenty-two minutes long, it definitely has a feeling of length to it, especially with countless scenes of walking, sitting, or sleeping, with no dialog. However, the film bears much intrinsic resemblance to Sergio Leone’s The Good, the Bad, and the Ugly, one of the most popular Western epics in cinema history. Three independent parties have multiple encounters throughout the film, culminating in an intense meeting of each party, soaked in some suspense. It is very hard to ignore the shadow of Leone’s classic through this film. Zhang borrowed respectfully and really made it his own through a narrative influenced by Tibetan folklore.

In addition to the nods to Leone, Zhang has a certain tendency to art cinema, especially the films of Andrei Tarkovsky. The film is dominated by incredible wide shots of the landscape of Tibet, as if it is demanding you to exalt its beauty. In contrast, some parts of the film take place in the more urbanized areas of Tibet, which provides a very interesting, yet jarring look at the geology of the country. Once more, I need to repeat that Zhang understands his relationship to his subject. Much like his nods to cinema, Zhang wants nothing more than to respect the sanctity of the countryside. As a result, we see long contemplative drone footage of trees, a static camera filming a mountain, with Tabei walking the extent of a football field in the foreground. It’s a single take. You are intended to explore the vastness of the Tibetan spirit not only through his “holy mission,” but also through the stoic mountains and unwavering plains. I would argue that Zhang’s camera didn’t even pick up as much as he wished for, but what we saw is breathtaking nevertheless.

Overall, the film is a marvel to watch. The narrative is rather cryptic and puzzling, but I believe it is presented in that way in an effort to foreground the visuals. There is not a single frame of this film that is not interesting to look at in some capacity. Don’t let the cover fool you: it depicts what looks like a ‘crouching tiger’ style sword fight within one of the many valleys we come to over the course of the film. Sure, the physical conflict does happen, but it is piecemeal to the immensity of the aperture of nature we are given to consume.