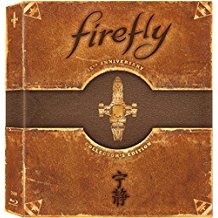 “Here’s how it is: the Earth got used up, so we moved out and terraformed a whole new galaxy of Earths, some rich and flush with the new technologies…some not so much. The Central Planets, thems formed the Alliance…waged war to bring everyone under their rule. A few idiots tried to fight it, among them myself.”

Sound familiar? A crew of scrappy underdogs skirting the edge of the galaxy to avoid an oppressive interplanetary alliance. Exactly 40 years ago, Star Wars used that formula to capture moviegoers’ imaginations, and it is currently being replicated by the uber-popular Guardians of the Galaxy series. But in between those two behemoths there was a little show called Firefly.

“I’m Malcolm Reynolds, captain of Serenity. She’s a transport ship, Firefly class. Got a good crew: fighters, pilot, mechanic. We even picked up a preacher, for some reason, and a bona fide companion. There’s a doctor too, took his genius sister out of some Alliance camp, so they’re keeping a low profile, you understand.”

Firefly is set in the year 2517 and follows the crew of Serenity, which is captained by Malcolm Reynolds (Nathan Fillion). Mal and right-hand woman Zoe (Gina Torres) were on the losing side of the aforementioned war against the Alliance. Six years later, they spend their days squeezing out a living with the help of Serenity pilot (and Zoe’s husband) Wash (Alan Tudyk), meathead mercenary Jayne Cobb (Adam Baldwin), and good-hearted mechanic Kaylee (Jewel Staite). They are accompanied by Inara (Morena Baccarin) a registered Companion who rents one of Serenity’s shuttles to conduct her business. (A Companion is sort of a cross between an escort and a geisha.)

In the show’s two-part first episode “Serenity” — we’ll get into the messy saga or how Firefly was aired out of order — the crew takes on some new passengers who end up becoming part of this rag-tag family. There’s Shepherd Book (Ron Glass), who has a strong moral compass but seems much too worldly for a holy man. We also meet Simon Tam (Sean Maher), a young doctor transporting mysterious cargo which turns out to be younger sister River (Summer Glau), a gifted young woman who was the subject of brutal brain surgery and psychological experiments at the hands of the Alliance.

It’s taken *way* too long to mention the fact that Firefly was created by Joss Whedon, who had both Buffy the Vampire Slayer and Angel under his belt when this newer series debuted on Fox in 2002. That means Whedon already had a penchant for taking a group of outsiders and constructing impossibly witty surrogate families. He also had a knack for creating series that connected deeply with their fan bases, even if they didn’t exactly light up the Nielsen ratings. (Remember those?) To be fair, the fact that Firefly didn’t make it past one season isn’t on Whedon and his team.

There’s no other way to say it: the network completely botched their handling of this unique show. There were shifting, unfriendly time slots and (most egregiously) episodes were aired out of order. The first episode shown on television was actually Ep. 2/“The Train Job,” which is a more straightforward action-filled hour than the more somber two-part premiere that also included crucial backstory for key characters. Only 11 of the show’s 14 episodes made it to air during its initial run, and the last episode to be shown was…two-part pilot “Serenity.” On top of that, Fox marketed the show as a rollicking sci-fi romp, when it was actually closer to an introspective drama that happens to be filled with people who are funnier than all of us.

Firefly is a space western that heavily leans into the “Western” in everything from its costumes to music cues. There are also unique, idiosyncratic touches like the fact that characters liberally mix in Chinese curses and expressions into conversations. (The show is set exactly 500 years in the future, after all.) But even with these seemingly wackadoodle touches, Firefly actually adheres to a pretty standard TV formula of having the Serenity crew tackle a different problem every week. And given the fact that the show was abruptly cut short, the show largely does a good job of developing its eclectic cast of characters.

They are, of course, led by Fillion’s star-making turn as Mal, a dashing smart-aleck who is totally believable as a hero and leader. (It’s easy to see why fans were clamoring for Fillion to take command of the Millennium Falcon if they ever made a Han Solo movie…oh wait.) We get a bit of backstory for the Tams (Ep. 5/“Safe”), Jayne (Ep. 7/“Jaynestown”), while the Mal/Inara will they/won’t they dynamic gets some play in both Ep. 4/“Shindig” and Ep. 13/“Heart of Gold.” I particularly enjoyed Ep. 10/“War Stories” since it gave standout goofball Tudyk some meatier material to work with and Ep. 6/“Our Mrs. Reynolds” for prominently featuring a pre-Mad Men Christina Hendricks.

Even though Firefly is firmly a space western, the show is willing to explore other genres. Both Ep. 3/“Bushwhacked” and Ep. 14/“Objects in Space” contain elements of space horror, as Serenity is infiltrated by malevolent outside forces. And I have no doubt that Whedon and company would’ve figured out a way to do a musical episode if the show had made it to season 4 or 5.

That’s just one of dozens of Firefly-related what ifs we might never get an answer to given the show’s premature cancelation. (Certainly more backstory on Shephard Book would’ve been on the way, for example.) Still, Fox has done right by the property in subsequent DVD and Blu-ray releases, so it’s as good a time as any to see how this set stacks up.

Firefly: 15th Anniversary Collector’s Edition is presented in its original aspect ratio of 1.78:1. The 1080p image is arrived at with an AVC MPEG-4 codec at an average of 20 mbps. This appears to be the same transfer as the 2008 Blu-ray release. While that was a significant upgrade from the previous DVD release, it is now a 9-year-old presentation that won’t come close to getting your juices flowing in the same way. Black levels are reasonably deep and offer decent separation, which is important for a show that spends a lot of time in deep space and the darkened bowels of Serenity. The image is clean and largely free of blemishes, though not something that could be described as razor sharp. (A few stray close-ups of Inara’s olive skin do stand out.) On the other hand, this was a remarkably versatile presentation for its time, going from deep dark space to bright, sunny prairies in the blink of an eye. The Western scenes hold up considerably better than the visual effects, which display some occasional blurriness here. (Don’t blame the production team: Firefly actually won an Emmy for Best Visual Effects.)

The DTS-HD Master Audio 5.1 track opens with a big bang since the show’s (actual) first episode opens with a flashback to the Battle of Serenity Valley. The sequence offers stellar sub activity (courtesy of various explosions) and fantastic directionality as laser blasts zoom from speaker to the next. The slight downside is that opening sequence isn’t quite representative of the rest of the show, which actually features minimum rear speaker and sub activity. (The exception includes any sequence where Wash has to fly Serenity out of trouble.) That being said, fidelity is pretty strong here throughout, and the witty dialogue comes through cleanly and is well-balanced with the track’s other elements.

All of the bonus material has been ported over from the show’s 2008 Blu-ray release and is mostly presented in standard definition. The only new additions in this 15th Anniversary Collector’s Edition are 9 Character Cards, a Map of the ‘Verse poster, and the set’s packaging. (The cardboard slipcase is very handsome and appropriately (faux)weathered, but can be kind of a pain when getting the discs in and out)

Available on all discs

Audio Commentaries: There are commentary tracks for the two-part series premiere, along with Eps. 2, 4, 6, 8, 10, 12 and 14. The tracks feature input from creator Joss Whedon, executive producer/writer Tim Minear and a bunch of cast members, including Nathan Fillion, Morena Baccarin, Alan Tudyk, and others.

Whedon kicks things off in the first episode by joking(?) about being stoned when he came up with the idea for Firefly. Each track features a healthy amount of humor to go along with a bunch of fascinating production details related to making a sci-fi show on a network TV budget. Some of the tracks — particularly the one for Ep. 2/“The Train Job”  — really get into the logistical gymnastics the show had to pull off in order to get Firefly on the air.

Here’s How It Was — The Making of Firely: (28:39) This is better than the average “Making of” and not just because a very candid Whedon kicks things off by calling Firefly “the source of more joy and more pain” than anything else he’d worked on. Cast and crew talk about the project’s origins, mashing together past, present and future, and where things would’ve gone if it had gotten more than one season.

Trailers: Includes a preview for fellow Whedon-verse series Dollhouse, along with a “Buffy & Angel” promo.

Reunion — Lunch with Joss, Nathan, Alan and Ron: (24:03) Whedon, Fillion, Tudyk, and Ron Glass meet for what is jokingly referred to as a book club-like discussion of the series. After the requisite jokes, the foursome lightheartedly covers the creation of almost every episode and what they’d like to see on the next DVD set. (Sorry, Alan…your audition tape is still the only one here.)

Deleted Scenes: There are four scenes total, including two from the series premiere that expand on the Battle of Serenity Valley. The others come courtesy of Ep. 6/“Our Mrs. Reynolds” and Ep. 14/“Objects in Space.” There is no Play All Option.

Featurettes: There are four featurettes here and the best is Serenity: The 10th Character (9:15) in which cast and crew speak lovingly about the beat-up, underdog ship that reflects its beat-up, underdog crew; Alan Tudyk’s Audition (1:04) reveals that pretending to play with dinosaurs helped the actor secure his role; Joss Sings Firefly Theme (1:16) and Joss Tours the Set (1:23) are pretty self-explanatory.

Gag Reel: (2:40) The Firefly team put together this gag reel for a Christmas party. However, the show’s untimely cancelation turned that into a wrap party.

Firefly: 15th Anniversary Collector’s Edition features all 14 episodes on three discs. (And in the proper order!) Many of the show’s cast members have gone on to flourishing careers and the show was even granted a follow-up movie with 2005’s Serenity. (Not to mention several comic book spinoffs.)

In other words, Firefly continues to live on in a way that is remarkable for a series that only aired 11 episodes. This new set from Fox is another way to keep the show alive. If you already own Firefly on Blu-ray, there’s no need to run out and grab this unless you are absolutely in love with the new packaging. However, if this show isn’t already part of your collection, this is a great opportunity to snatch it up!