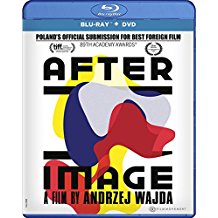 Afterimage is the final film of Andrzej Wajda, prior to his death in late 2016. Though I am not familiar with the cinematic stylings of Wajda, I researched enough to know that he typically helms projects that are historical and biographical, and cover very controversial topics taking place in Poland. Specifically, the ways in which occupation affected Poland during WWII. If this film has done anything for me, it has given me a curiosity to seek out more films from Wajda’s oeuvre. Afterimage is very methodic in its narrative and its set designs. Which is necessary given the film’s source material.

The film studies the twilight years of internationally renowned abstract painter, Wladyslaw Strzeminski (Boguslaw Linda), as Stalin’s socialistic ideologies permeate Poland, leaking into the world of fine arts. Not only is Strzeminski a gifted visionary, he teaches Art History and Analysis at the Academy of Fine Arts in Lodz, Poland. His charisma and teaching style causes his students to develop into an almost cult-like group of followers. However, these followers are interested in keeping the tradition of abstract art alive through the difficult times of Stalin’s call for socially uniform realism among all of the fine arts, including painting. As the film progresses, Strzeminski faces many bouts of artistic discrimination and he continuously rebels, no matter the cost.

The narrative contains, I will argue, a timeless message to be taken and interpreted for generations to come: how social and political ideologies are communicated with and through ‘art,’ and how ‘art’ circumvents these stigmatic principles through a variance of aesthetics. We will always need some artistic medium to call attention to the shortcomings of our respective cultures, be they politics, the economy, or any other specific social issues; art must be there to communicate more intense ideals through a venue of beauty and intrigue. This film weaves that concept beautifully into its narrative: Strzeminski maintains his abstract visions in the face of the newfound legality of “realism,” which in turn ostracizes him to a point of desperation. Imagine your livelihood, your passion that does not pay well, being ripped away from you simply because your passion does not align with the rapidly intruding social standards of your country. Wajda understands this specifically, since he has been a prolific Polish filmmaker who started in the aftermath of the Polish occupation.

Afterimage’s set designs are simplistic, yet beautiful; specifically, Strzeminski’s apartment. So many scenes regarding his personal philosophies are explained by the visuals of the space that he occupies. It is a minimalistic living environment, with just the necessities to survive. He has a caretaker to cook for him, as he is missing a leg and an arm (both losses are never explained, but they serve as a figural representation of his hardships). However, within this minimalistic environment we are given extremely poignant scenes of him speaking with is young daughter or his stoic meditations. One of my favorite scenes involves him working on a painting as a giant red flag bearing Stalin’s visage is being raised onto his apartment building, casting a foreboding red glow into his apartment, preventing him from seeing the colors correctly. In a bout of frustration, not even understanding what is causing the glow, he tears a hole in the flag with one of his crutches, letting the natural sunlight fill his apartment once more. The visuals of this scene really describe the entire film: his radical artistic abstraction (his crutches signify his own abstraction), tear a hole in Stalin’s flag (the new social norm that casts a terrible glow throughout the country of Poland).

I wish I could say that the film is a fitting end to Wajda’s career, but I have only seen this one film and nothing more. If anything, it is worth the watch just to take in the message of fine art’s connection to political and social ideologies. A concept that becomes more interesting than the narrative it stems from as the film concludes. The true meaning of this film lies in how you perceive art when it critiques societal values. Yes, abstraction is the enemy of socially uniform realism, but what is significant about putting that message into a film, a more inclusive and collective medium or art? Perhaps that question alone makes this film a fitting end to Wajda’s career.