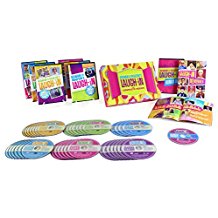 We turn our first spotlight on the folks at Time-Life. They put the wow into gift sets and have assembled some mighty big collection sets particularly for that person on your list who loves all things vintage. Here’s what they have this Christmas:

Few television shows have had as much influence on the pop culture as did Rowan & Martin’s Laugh-In. The brainchild of George Schlatter the series has left behind a rich legacy. Even if you’ve never seen an episode of Laugh-In, you’ve heard the catch-phrases, or you’ve watched another show that was directly influenced by it. Lorne Michaels, who created the iconic Saturday Night Live, began as a writer on Laugh-In, and once you’ve seen Laugh-In, you are going to instantly recognize many of the same ideas. Shows like Hee Haw and the British Benny Hill have admitted to taking material directly from Laugh-In. Best of all, it was a family show that didn’t need to be on at midnight so the kids wouldn’t be around. Laugh-In thrived for six seasons in prime time, and I can still remember evenings where the entire family gathered to watch. It was something none of us had seen before but we all have seen since. But as the old song goes: “Ain’t nothing like the real thing”. And Time-Life put it all together in one massive box set. All 140 episodes on a massive 38-disc set.

Today this might appear dated television, and it’s exactly that. But this series is somewhat historical in nature. The show began in the 1960’s at the start of the flower power movements and Vietnam protests. The name itself is taken from terms like sit-in. Much of the show’s look and material reflect those times. It’s rather amazing how much of a mirror this show is to the time it was broadcast. Because it lasted six years, we also start to see the transition from the 1960’s to the 1970’s both in design and material. It’s pretty cool to watch it happen over the six seasons of the series. Because it was such a socially relevant show, this is truly a window into the past. George has been approached to bring it back but doubts he would be allowed the freedom he had then. He’s absolutely right. Without that freedom it just wouldn’t be Laugh-In. In 1977 there was a brief attempt to bring it back, but you just can’t create something for the first time again. For now, you have 140 episodes to enjoy the people, places, and themes of the world as it was 50 years ago. I find that “very interesting”.

Thanks For The Memories: The Bob Hope Specials

There’s plenty of Hope for Christmas this year. How about 19 DVD’s just filled with Bob Hope specials? Thirty-seven hours of Bob Hope and his great friends spilled out on 39 television special broadcasts. A full-sized 32-page full-color book chronicles the life and career of the man himself. Over the years Bob Hope has made a special kind of name for himself by entertaining our troops abroad during wartime. World War II saw Hope bringing a little entertainment to the weary troops. He was particularly known for his Christmas shows. Santa came to the front lines and delivered some Hope, Bob Hope. This set brings us some of his most memorable performances with quite a bit of bonus material that has Hope looking back on those years. There is also some pretty cool footage of the World War II performances. These shows are a true and rare snapshot of history all at the same time. Twenty of these specials haven’t been seen since they were originally broadcast many decades ago.

The specials start back in 1950 and go all the way through the 1990’s with the bulk of the specials from the 1960’s and 1970’s and most during the Vietnam era. Sadly there is no footage of Hope entertaining Washington’s troops at Valley Forge. The bonus material covers all of Hope’s career going back to World War II. Tons of interviews with people who knew and worked with Hope complete the set, and a bonus disc of Hope on The Dean Martin Celebrity Roasts is a nice addition to the material. If you know a Bob Hope fan, you can be sure that this set will keep them busy for days.

In the 1950’s television was still a pretty new and exciting world. It was a black and white world, for the most part, until the mid-1960’s. One of America’s first funny men to come into our living rooms was the delightful Red Skelton. Red was known for his large population of charming characters that captured the hearts of a generation. There were 130 episodes of the show produced, and the final season was made in full color. Most people didn’t have color sets at that time, and now is the first time they get a chance to see what they missed.

You get 22 DVD’s with all 130 episodes and more bonus material than you could ever hope for. The most impressive of these is a wonderful feature-length biography of Red. Here you get the expected interviews, but much more. You get to see some of Red’s home movies that bring out the personal life of the vintage comedian. There’s also a bonus DVD that includes the last of Red’s specials.

Red’s charm and skill came from a very physical kind of comedy. He was a master of pantomime by the time he was 10 years old and combined those skills with that of a clown. His characters didn’t have a lot of dialog, and Red was able to portray a lot with his eyes and facial expressions. His most famous character has to be the lovable Clem Kadiddlehopper. He was a naive sort of fellow who was often the victim of a misunderstanding or unusual circumstance. He created a catchphrase of the early 40’s with his radio character Junior, who carried over to his television days. The mischievous boy was known for saying “I dood it”. It became so well-known that after the famous World War II Doolittle raid the flyer’s exploits were reported in a New York Times headline that read “Doolittle Dood it!”. By the time he reached television in 1951 he had perfected these characters, and they were a staple until 1970.

The set is separated into four sections. The Red Skelton Show Early Years features the 1950’s black & white shows in four slim boxes. A 10-disc set highlights the color episodes of the Red Skelton Hour, while a 3-disc set features the best of Red Skelton and celebrates the 100th birthday of the star. Finally a disc contains those farewell specials. It’s a pretty complete package and tribute to the late great Red Skelton.

Can you believe the Country Music Association has been running its annual awards celebration for nearly 50 years? It all started in 1967, and Time Life has captured highlights from most of those 50 years. We’re talking about 10 DVD’s that take us through nearly 50 years of country music’s biggest stars singing their biggest hits, from Johnny Cash singing Folsom Prison Blues in 1968 right up to Sam Hunt performing Take Your Time in 2015. That’s 127 individual performances that include historic team-ups like Miranda Lambert, Sheryl Crow, and Loretta Lynn performing Coal Miner’s Daughter in 2010. Or how about Vince Gill, Patty Loveless, Ricky Skaggs, and Dire Straits icon Mark Knopfler performing Go Rest High On That Mountain? These are the best country music songs over the years. It’s a fascinating evolution as country music worked its way from rural towns to mainstream stars.

Bonus features include interviews with Charlie Pride, Sarah Trahern, Charlie Daniels, Vince Gill, Larry Gatlin, Naomi Judd, Ronnie Milsap and Kenny Rogers. There are a few bonus performances and salutes to the likes of Barbara Mandrell, Brooks & Dunn, Carrie Underwood, Miranda Lambert, George Strait, and Randy Travis. There are tributes to lost stars like George Jones and Tanya Tucker. If you have to shop for a country music fan, this set has you covered. Live from The Grand Ole Opry, this collection puts it all together for you and that certain someone on your Christmas list.

Gino Sassani is a member of the Southeastern Film Critic's Association (SEFCA). He is a film and television critic based in Tampa, Florida. He's also the Senior Editor here at Upcomingdiscs. Gino started reviewing films in the early 1990's as a segment of his local television show Focus. He's an award-winning recording artist for Omega Records. Gino is currently working on his 8th album Merchants & Mercenaries. Gino took over Upcomingdiscs Dec 1, 2008. He works out of a home theater he calls The Reel World. Favorite films: The Godfather, The Godfather Part II, The Body Snatcher (Val Lewton film with Karloff and Lugosi, not the pod people film), Unforgiven, Gladiator, The Lion King, Jaws, Son Of Frankenstein, The Good, The Bad And The Ugly, and Monsters, Inc.
Three Billboards Outside Ebbing, Missouri Afterimage