Posted in: No Huddle by Jeremy Butler on December 5th, 2017 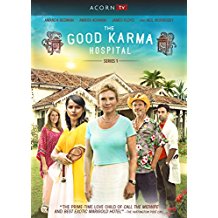 It is difficult to become invested in a group of characters in just six episodes, but I can say in the case of The Good Karma Hospital, by the time we reached the season finale, I was definitely invested. The story of a big city doctor who leaves her life behind in favor of a journey of self-discovery in a foreign locale is not precisely a new tale, but it is unfolded in such a charming way that you will find yourself willing to overlook its sometimes predictable nature. With a backdrop in south India, the show takes place in a public and underfunded hospital unofficially run by a strong-willed and surly matriarchal character. Mix that with our fish-out-of-water junior doctor, and you get a dynamic reminiscent of the relationship between J.D. and Dr. Cox. Extremely charming and unafraid, they tackle serious issues that plague an underfunded hospital. The Good Karma Hospital is a worthwhile watch.

Following a breakup, Dr. Ruby Walker finds herself overwhelmed and overworked, which prompts her to make the decision to change her life completely and apply for a job with a hospital in south India. Shortly after her arrival, she comes to find that the job she applied for is not the one she got. She finds herself outsourced to the Good Karma Hospital, an underfunded public hospital run by the blunt and no-nonsense Dr. Lydia Fonseca. Unlike what she experienced at the previous hospital, there is no advanced equipment to aid in her diagnoses, and she will need to rely solely on her intuition and the intuition of her colleagues; of course, that is easier said than done.  Shortly after meeting Dr. Fonseca, Dr. Walker finds herself insulted and learns that before even being considered for the position she applied for, she must complete a year at a public institution. She quickly finds herself out of her comfort zone as she finds that she will be expected to perform surgery despite her predisposition to pediatrics.

Further complicating her situation is the lukewarm reception she receives from fellow doctor Gabriel Varma, who regards her as a temp rather than someone worthy of the time it would take him to train her. Despite her initial reservation, Ruby soon comes to thrive in her new circumstances and grows to love the work as she begins to feel like she is making a real difference in the lives of people she is helping. Just as she finds herself settling in, her past makes a return, causing her to question where she is really supposed to be.

As I mentioned earlier, though certain storylines are fairly predictable, I wasn’t too bothered by that aspect due to the charming nature in which they were told. Another reason I wasn’t so bothered definitely was the Dr. Fonseca character. Within minutes of meeting her, I gleaned that despite her prickly exterior, she is a very dedicate individual who pushes herself to the max in service of the people, and she will tolerate nothing less from the people under her unofficial command. I say unofficial because she is not technically the head of the hospital, though I doubt anyone has bothered to tell her that. I am also very fond of characters who speak their mind without holding anything back, an attribute she displays constantly, but her introduction scene is where it has the greatest impact. She is assisting a patient who is complaining about a dislocated shoulder following a moped accident. He is screaming out in pain in front of his fiancé, and she quickly points out to him how unmanly he is being, and when he begins to protest, she swiftly pops it back in the socket. You don’t learn that kind of savvy in a medical book.

The dynamic between Ruby and Dr. Fonseca is also a major focal point of the series, as the two have an obvious mentor-mentee relationship and are destined to butt heads over their clashing styles. I don’t imagine I have to draw a map for you guys; I’m sure you all can see where the future of this series is heading. Nevertheless, it is not the destination that makes the series, but rather the journey. Needless to say, I don’t imagine this show hooking the young adult set; however, the show definitely has the potential to capture the Grey’s Anatomy audience, and it would seem that it already has, as the show has been commissioned for a second season, which is likely to be released in 2018.

I normally don’t go in for the medical-drama genre, but I did enjoy watching the show. I see it as an underdog series where you get to see dedicate individuals go above and beyond normal means in service of the greater good. Who doesn’t love to see something like that? That said, I highly recommend giving it a chance.

Jeremy Butler is a film school graduate of the International Academy of Design and Technology. He is been writing for Upcomingdiscs since 2012; however, movies have played a big part of his life for much longer. Favorite genres include horror, science fiction/fantasy, and comedy. Favorite movies are V for Vendetta, Boondocks Saints, Kiss Kiss Bang Bang, and The Godfather.
Tuesday Round Up: December 5, 2017 Holiday Gift Guide Spotlight: CBS Television Sets