Posted in: Podcasts by Gino Sassani on December 15th, 2017 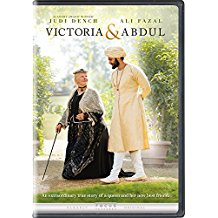 When you see a period piece there are so many elements that can either bring you into the world on the screen or take you completely out of the experience. Such is the case with Universal’s Victoria & Abdul. No one understands that responsibility than the film’s costume designer Consolata Boyle. The film appears on Blu-ray on Dec 19th but you won’t have to wait that long to find out more about the film and its period costumes. I had the opportunity to chat with Consolata Boyle about her work on Victoria & Abdul. Now you can listen in on our conversation all the way from London. Bang it here to hear my chat with Consolata Boyle.

Gino Sassani is a member of the Southeastern Film Critic's Association (SEFCA). He is a film and television critic based in Tampa, Florida. He's also the Senior Editor here at Upcomingdiscs. Gino started reviewing films in the early 1990's as a segment of his local television show Focus. He's an award-winning recording artist for Omega Records. Gino is currently working on his 8th album Merchants & Mercenaries. Gino took over Upcomingdiscs Dec 1, 2008. He works out of a home theater he calls The Reel World. Favorite films: The Godfather, The Godfather Part II, The Body Snatcher (Val Lewton film with Karloff and Lugosi, not the pod people film), Unforgiven, Gladiator, The Lion King, Jaws, Son Of Frankenstein, The Good, The Bad And The Ugly, and Monsters, Inc.
One of Us Holiday Gift Guide Spotlight: Barron’s 1001 Movies You Must See Before You Die 7th Edition