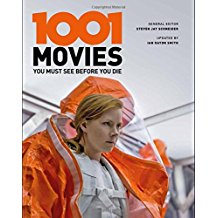 I think I see your problem. You have this list. It’s a list of people you need/want to buy a Christmas gift for. The trouble is that they’re into home theatre, and you don’t know Star Trek  from Star Wars. You couldn’t tell a Wolf Man from a Wolverine. And you always thought that Paranormal Activity was something too kinky to talk about. Fortunately, Upcomingdiscs has come to the rescue every Christmas with our Gift Guide Spotlights. These gift guides ARE NOT paid advertisements. We take no money to publish them. The kinds of things we recommend here are things I would be delighted to find under the tree.

Back for it’s updated 7th edition Barron’s brings you the book for the movie collector who has everything. It’s 1001 Movies You Must See Before You Die. This book is a lot of fun as well as being informative. It’s a hefty book that will put some weight under that tree, to be sure.

At the turn of the millennium a decade and a half ago, lists were pretty popular. It didn’t matter if you were into the world of sports or movies, everybody was looking for the all-time best of everything. The American Film Institute got into the trend by releasing top-100 lists. Heroes, villains and memorable quotes all got the treatment. We all argued about the “classics” we felt were unfairly slighted and the “idiotic” choices that did make the lists. If only the lists were so much larger. Then everyone’s favorites would be included and we could all finally find a list we could agree on. But, what number would that be? 100 was too small. A million was just too large. What number might be just right? 1001?

The millennium passed and the manic number of lists subsided. 2007 came and we all learned what a Bucket List was. We all started thinking about those wonderful things we felt we simply must experience before we kick that figurative bucket. If you’re reading these pages, you likely included a list of films that you had to see before you die. It seems that the folks at Barron’s Publishing have attempted to answer that question for us with their encyclopedic book: 1001 Movies You Must See Before You Die.

The first thing you need to know is that the book isn’t laying the claim that these are the very best films ever made. It merely includes movies that for some reason or another demand to be experienced at least once in your life. Many are included because of the influence they have had on those that came after. And while these films might seem primitive by modern standards, we wouldn’t have the modern standards without them. Others are included because of some groundbreaking milestone the film measures in the industry. Many are included because of how much they have invaded our pop culture. The movies span all genres, all nations, and all subjects. Each capsule gives us a short description of the film and a brief presentation of the reasons for its inclusion here. The capsules range from very short paragraphs to two-page spreads. There are nearly 100 contributors, so the writing styles vary considerably. The book includes hundreds of wonderful stills from these films and is one of the more informative books I’ve encountered in the last decade.

I’m very pleased that there appears to be no discrimination over genre or the country of origin. The collection of films here is appropriate for any true connoisseur of the medium. For the most part, the writers are knowledgeable about their subject and provide just enough about each film to whet our appetite, which is the true purpose of the volume, not that I need much pushing to watch more movies. There are rare gems here that will have me searching the rare video lists out there to check out. Unfortunately, they did not give consideration to availability, and while I would never condone resorting to bootleg copies, I’m afraid that’s the only way you’ll ever see some of these titles. It’s likely impossible to see all of these movies, but it will be fun trying. That’s what makes this book so enjoyable, if a bit of a tease.

The book is an excellent value. It’s heavy and substantial, clocking in at nearly 1000 pages. For each movie you’ll get vital cast and crew information as well as Oscar nominations. English translations are provided for foreign films. Nearly ever film sports at least one photograph.

This is the 6th edition of the book that first appeared in 2003. Since that time a ton of new films have appeared some have found their way into the book. Some of these additions include Star Wars: The Force Awakens, The Revenant, Mad Max: Fury Road, Jackie, Arrival and Moonlight. Of course, that means some films have to be taken off the list. That’s a great reason to keep the older editions. You can’t beat this one for a holiday gift.

Gino Sassani is a member of the Southeastern Film Critic's Association (SEFCA). He is a film and television critic based in Tampa, Florida. He's also the Senior Editor here at Upcomingdiscs. Gino started reviewing films in the early 1990's as a segment of his local television show Focus. He's an award-winning recording artist for Omega Records. Gino is currently working on his 8th album Merchants & Mercenaries. Gino took over Upcomingdiscs Dec 1, 2008. He works out of a home theater he calls The Reel World. Favorite films: The Godfather, The Godfather Part II, The Body Snatcher (Val Lewton film with Karloff and Lugosi, not the pod people film), Unforgiven, Gladiator, The Lion King, Jaws, Son Of Frankenstein, The Good, The Bad And The Ugly, and Monsters, Inc.
Interview with Consolata Boyle Costume Designer On Victoria & Abdul Game of Thrones: The Complete Seventh Season (Blu-ray)