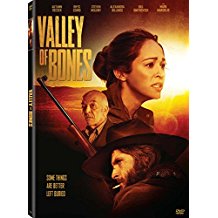 Valley of Bones is one of the most interesting films I’ve seen recently, simply because it takes an old B-movie trope and transforms it into a decent drama. However, rather than unearthing some soon-to-be-live prehistoric beast in the desert (a la The Mole People, Tarantula, or The Black Scorpion), Valley of Bones keeps the excavation underground and the real danger way out of the control of the characters. Where the trope is to have the fault of having a monster on the loose lie with the excavation team, this film develops the danger and drama as an outside force imposing upon the excavation team. While this form of external conflict can be found in countless films, this is the first I’ve seen it as it applies to a family-run archeological dig.

The film takes place in a portion of the Badlands within the United States, where it is rumored that a large, complete Tyrannosaurus Rex fossil has been discovered. Anna, a paleontologist first and a mother second, is tipped off to this astonishing find by McCoy, an unsavory drug addict. McCoy owes a large sum of money to the notorious gang run by El Papá, but his tenacity will not let him go down without a fight. McCoy cons Anna into helping him unearth the “dead lizard” so that he can pay off his debt and save his own daughter from being collateral damage. As a result, Anna, her son, and her team must survive what has come to be the most dangerous dig they have performed.

What makes this film “work” the most is the fact that we, as an audience, are kept in the dark just enough for the threat to remain mysterious. While Anna is the one who is kept in the dark the entirety of the film, the story really only throws us enough bread crumbs to learn how big of a threat McCoy’s pursuers actually are. Essentially, the film showcases a great balance between dramatic irony and surprises for the audience, which is something that I really wasn’t expecting. Perhaps this can be attributed to director Dan Glaser being part of the actual writing team. The intricacies of the story certainly feel like a collaborative effort, but the directorial choices in form and sequence could have only been possible if the director knew the story inside and out.

What I would have liked to see more of was the location of the Badlands. So much of the film seems to take place in the encampment, in a car, in a barn, and most of all, in the dark. For being in a large area of plains and wilderness, the film felt fairly claustrophobic. Although, now that I am writing it out, I am considering that this was done on purpose: creating the feeling of claustrophobia in the middle of wide open plains, which is a bold, creative choice. Nevertheless, while filming in the dark can yield incredible visuals, I was not impressed by cinematography in this particular case. A camera really has the ability to capture the majesty of nature, which is honestly what I was expecting when I read the back cover.

Overall, the film’s story was very impressive and engaging. The T. Rex fossil is a classic macguffin that generates enough intrigue for character and spectator alike. Honestly, when a character is engaged in some form of task, it is easy for me to become engaged with them. I want to know if McCoy’s daughter will be saved; I want to know if Anna’s relationship with her son improves as they excavate these fossils. Even if these desires are not paired with breathtaking visuals, the film has enough luster to be endearing and entertaining.