Posted in: The Reel World by Gino Sassani on December 23rd, 2017 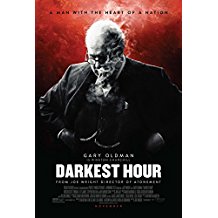 I suspect that at about this time last year too few Americans knew anything about Dunkirk and the pivotal role it played in the early moments of World War II. In July Christopher Nolan brought his 70mm cameras out to play and we relived the courageous evacuation of over 300,000 British soldiers from their surrounded position just across The English Channel. Dunkirk was an incredible film that will likely take away some Oscars for the year. But what Nolan’s spectacle failed to demonstrate was the reason for all of that action. Why were civilian vessels picking up these soldiers? Those questions are answered in Darkest Hour. I suspect that this film might be sharing some of the stage come Oscar night. e two films appeared less than 6 months apart in the cinemas but they make extraordinary companion films. As movie-goers we couldn’t have asked for a better one-two punch on a subject a lot of people have been learning more about just by going to the movies.

Gary Oldman looses himself completely as Winston Churchill here. It starts with the clever use of prosthetics that make the unlikely actor look more like the iconic British Prime Minster. How much of his body was a fat suit and how much was pounds put on by the actor ala De Niro in Raging Bull, I’m not sure. But the work on the actor’s face hides away the actor and brings out Churchill. But it’s not just the look alone that sells this role so completely. It’s one of Oldman’s finest performances that makes this character so compelling. Winston Churchill was a force of nature and Gary Oldman delivers just that in Darkest Hour.

The film begins in the final hours of the Neville Chamberlain (Pick-Up) government as Hitler begins his aggressive march to conquest. His policy of appeasement has failed so miserably that both parties are calling for his head. In British government that amounts to a vote of no confidence and a new Prime Minister is sought. Winston Churchill isn’t any more popular than Chamberlain, particularly by his own party. His legacy was one of catastrophic failure in the first World War but he might just be the only man both parties might settle with. War is pending and unity is needed badly in Great Britain. And in spite of his failures Churchill was right on the money when it came to Adolf Hitler. Who better to lead England through the war times ahead. It kind of reminds me of a scene in The Godfather when Tom Hagen is told by Michael that he’s not a war-time consigliore. Churchill is a war-time consigliore.

As Churchill takes his place at the head of state he already faces a plot from Chamberlain and Lord Halifax (Dillane) to remove him from power. They try to corner him with the prospect of negotiations with Hitler that might leave England with some semblance of freedom. Of course, Churchill knows there can be no freedom as long as Hitler is allowed to command Europe. The problem is that before the war will even officially begin for The United Kingdom Germany as already surrounded their entire fighting force and are pushing them literally into the sea at Dunkirk. The pressure mounts for negotiations or there might not be an army to even fight a war. That’s when Churchill makes a bold move and puts an order out for all civilian ships to mount the greatest rescue operation in world history. With any luck maybe he can save as many as 30,000 troops. History disagrees with Churchill’s best hopes for success. Operation Dynamo saved 10 times that number. Without that operation there would have been no war with England. Germany would have won before it even invaded.

The film doesn’t take us out on the water to witness the operation. Christopher Nolan did that for us back in July. This is an intimate film that is soundly led by the compelling character himself. I love that Darkest Hour is just as quick to point out Churchill’s flaws as loudly as his courage. This is not always a very likable person. His own confidence is not nearly as strong as his arrogant nature would leave one to believe. Yet this was a case of the right person at just the right moment in history and that’s the story you will see here. It’s much more of a political thriller as it isn’t a war film. Certainly, there are wonderful set pieces to be found here. The famous Churchill bunker is the perfect setting for much of the story but so is the hall of Parliament where the man faced enemies just as dangerous as Hitler himself. In that sense this film recalls Spielberg’s excellent Lincoln that focuses on the political struggles of the mounting Civil War rather than the action on the battlefields themselves. Director Joe Wright keeps us close to his subject and allows that force of nature to drive this war story. The battles fought in The House Of Commons might not reveal the kind of bloodshed that bullets and bombs deliver but it’s no less brutal and that’s the lesson you walk away from Darkest Hour learned and learned well.

This is one of the best films I’ve seen in 2017. Dunkirk certainly fits that description as well. But I think that I liked this one just a little bit better. Wright delivers just as compelling a drama as Nolan did and without the benefit of the bells and whistles of his cinematic presentation. There’s no thrilling battles and crowded beaches of soldiers here to hide behind. This is raw drama hat had more of an emotional impact on me than did Dunkirk. Like Churchill did over 70 years ago Wright and his cast and crew “Mobilized the English language and sent it into battle.”

Gino Sassani is a member of the Southeastern Film Critic's Association (SEFCA). He is a film and television critic based in Tampa, Florida. He's also the Senior Editor here at Upcomingdiscs. Gino started reviewing films in the early 1990's as a segment of his local television show Focus. He's an award-winning recording artist for Omega Records. Gino is currently working on his 8th album Merchants & Mercenaries. Gino took over Upcomingdiscs Dec 1, 2008. He works out of a home theater he calls The Reel World. Favorite films: The Godfather, The Godfather Part II, The Body Snatcher (Val Lewton film with Karloff and Lugosi, not the pod people film), Unforgiven, Gladiator, The Lion King, Jaws, Son Of Frankenstein, The Good, The Bad And The Ugly, and Monsters, Inc.
Valley of Bones 12 Days Of Christmas Giveaways: Day 1 – Thanks for the Memories: The Bob Hope Collection Deluxe Box Set by Time Life