Posted in: Contests by Gino Sassani on December 26th, 2017 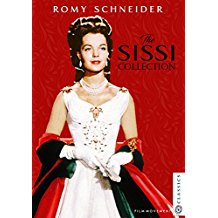 On The Second Day Of Christmas Film Movement Gives To You:

The Sissi Collection on Blu-ray. This 4 film collection brings you the complete collection of Sissi films. You get Sissi (1955), Sissi: The Young Empress (1956) and Sissi: The Fateful Years Of An Empress (1957). You also get the bonus film Victoria In Dover (1954) where actress Romy Schneider plays Queen Victoria just one year before she takes on the role of Princess Elisabeth of Austria, or better known to film fans: Sissi. It’s all from Film Movement and they’ve given us 3 copies to give away this holiday season

Gino Sassani is a member of the Southeastern Film Critic's Association (SEFCA). He is a film and television critic based in Tampa, Florida. He's also the Senior Editor here at Upcomingdiscs. Gino started reviewing films in the early 1990's as a segment of his local television show Focus. He's an award-winning recording artist for Omega Records. Gino is currently working on his 8th album Merchants & Mercenaries. Gino took over Upcomingdiscs Dec 1, 2008. He works out of a home theater he calls The Reel World. Favorite films: The Godfather, The Godfather Part II, The Body Snatcher (Val Lewton film with Karloff and Lugosi, not the pod people film), Unforgiven, Gladiator, The Lion King, Jaws, Son Of Frankenstein, The Good, The Bad And The Ugly, and Monsters, Inc.
12 Days Of Christmas Giveaways 12 Days Of Christmas Giveaways – Day 3: Cars 3 On Blu-ray From Disney/Pixar