Posted in: Contests by Gino Sassani on December 30th, 2017 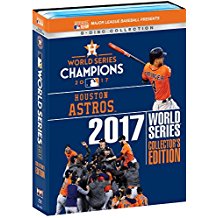 On The Sixth Day Of Christmas Shout Factory Gives To You:

World Series Collector’s Edition: 2017 Houston Astros on Blu-ray. It might be the dead of Winter but you can relive the glory of the 2017 Major League Baseball 2017 World Series. You get all 7 games with plenty of options and extras. You can listen to the Astros or the Dodger’s radio broadcasts. Also game 7 of the ACLS. Here’s a bonus prize. Guess Gino’s favorite baseball team. From the correct answers we will give away the single-disc version of this collection that features highlights and clinching moments on 1 disc. Shout Factory is bringing back Summer. So enter to win today.

Gino Sassani is a member of the Southeastern Film Critic's Association (SEFCA). He is a film and television critic based in Tampa, Florida. He's also the Senior Editor here at Upcomingdiscs. Gino started reviewing films in the early 1990's as a segment of his local television show Focus. He's an award-winning recording artist for Omega Records. Gino is currently working on his 8th album Merchants & Mercenaries. Gino took over Upcomingdiscs Dec 1, 2008. He works out of a home theater he calls The Reel World. Favorite films: The Godfather, The Godfather Part II, The Body Snatcher (Val Lewton film with Karloff and Lugosi, not the pod people film), Unforgiven, Gladiator, The Lion King, Jaws, Son Of Frankenstein, The Good, The Bad And The Ugly, and Monsters, Inc.
The Lego Ninjago Movie (Blu-ray) 12 Days Of Christmas Giveaways – Day 7: Win The Secret Life of Pets From Universal Studios