Posted in: Contests by Gino Sassani on January 1st, 2018 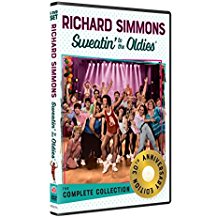 On The Eight Day Of Christmas Time-Life Gives To You:

Richard Simmons: Sweatin’ To The Oldies The Complete Collection on DVD. New Year’s Day is upon us and we’ve been eating a lot of stuff that isn’t quite so good for us. Many of you are making a resolution to take off some weight. Our heroes over at Time-Life have come to the rescue with exorcise, old school. They’ve given us 6 copies of this collection. That means 6 winners! It brings you all 5 volumes of Sweatin’ To The Oldies plus a 20-page photo album. This is the 30th Anniversary Edition so you might call it Sweatin’ To The Ancients. This is our first contest of 2018. Maybe this is the start of your lucky year.

Gino Sassani is a member of the Southeastern Film Critic's Association (SEFCA). He is a film and television critic based in Tampa, Florida. He's also the Senior Editor here at Upcomingdiscs. Gino started reviewing films in the early 1990's as a segment of his local television show Focus. He's an award-winning recording artist for Omega Records. Gino is currently working on his 8th album Merchants & Mercenaries. Gino took over Upcomingdiscs Dec 1, 2008. He works out of a home theater he calls The Reel World. Favorite films: The Godfather, The Godfather Part II, The Body Snatcher (Val Lewton film with Karloff and Lugosi, not the pod people film), Unforgiven, Gladiator, The Lion King, Jaws, Son Of Frankenstein, The Good, The Bad And The Ugly, and Monsters, Inc.
12 Days Of Christmas Giveaways – Day 7: Win The Secret Life of Pets From Universal Studios 12 Days Of Christmas Giveaways – Day 9: Miracle on 34th Street 70th Anniversary From Fox