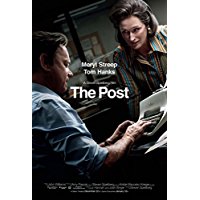 Several movies have been released over the past three decades that defend the press or show the importance of the media to inform the public.  This is one of them that for the most part does reveal the inner sanctum of one newspaper as it deals with exposing the government for wrong decisions leading to the death of thousands in the Vietnam War. While the script does reveal the sadness of human life losses that could have been avoided, unfortunately the film uses it to glorify newspapers using old news. A platoon starts taking heavy fire in a wooded area, and the body bags start to fill at a high rate.  It’s the Vietnam War in 1966, and Assistant Secretary of Defense Daniel Ellsberg (Matthew Rhys) has just returned from a bloodbath after an ambush by the Viet Cong. Inserted as a military strategist under the Pentagon’s Assistant Secretary of Defense for International Security Affairs John McNaughton, he’s observing the war firsthand.

On Air Force One flying back to the United States, Ellsberg is asked to meet with Secretary of Defense Robert McNamara (Bruce Greenwood) in the forward compartment. When he approaches McNamara, he’s discussing the war situation with Robert Komer (David Beach). Komer is organizing the Civil Operations and Revolutionary Development Support program for Vietnam. McNamara turns to Ellsberg and asks him what he feels about the war and if things are better or worse. Ellsberg replies that things are the same, to which McNamara replies that then things have gotten worse.

When Ellsberg hears the opposite from McNamara at a press conference, he goes back to his office at the Pentagon and pulls classified reports from his files. So begins a dangerous war of nerves as Ellsberg leaks the information to the press. Known as the Pentagon Papers, the disclosure is that the war could have never happened and should have ended six years earlier with the U.S. pulling out of Vietnam. The film opens a can of worms that includes President Harry S. Truman, President Dwight D. Eisenhower, and President John F. Kennedy, finally being resolved by President Richard Nixon.

That’s the real meat of the movie, and it happens in the first ten minutes.  The film then turns to more of a glorification of the Washington Post. Yes, there is a point that the publications were putting their businesses on the line as the federal government forbade the newspapers from publishing classified documents.  Along with a boring look into the business end of the Washington Post, that’s what the rest of the movie is about.

As far as the acting goes, both Tom Hanks and Meryl Streep do their normal best as the Editor and Publisher of the Washington Post.  It’s 1971, and under pressure Managing Editor Ben Bradlee (Hanks) and Owner Kay Graham (Streep) are backed into a corner when the New York Times runs a story involving the Pentagon Papers. They want a piece of the action and worm their way into one of the biggest news stories of the twentieth century. If the Washington Post could get a copy of the government classified papers it would change the outlook of their newspaper’s bottom line.

The newspaper business is not all glitz, glamor, and games, and the film does drop a few lines on their shady tactics. In one scene Editor Bradlee gets a tip that a reporter at the NYT may be up to something important.  He asks a Post intern to hop a train and go to the New York Times. He’s not to tell them who he works for, but to contact one of their reporters Neil Sheehan (Justin Swain) and find out what he’s working on.  The Post intern asks him if it’s illegal to do this, and Bradlee with a smile responds “Well, what is it you think we do here for a living, kid?”

The Post has been rated PG-13 for language and brief war violence. Not to use a pun, but some news media have been saying that the Washington Post is taking credit for what the New York Times did.  It’s a moot point considering the movie centers on one of the Newspapers and their contribution to uncovering the facts behind the needless loss of American soldiers in the Vietnam War.

An interesting film that recalls a negative era of U.S. military history.

John Delia has been on all sides of the movie business from publicity, writing for publications and on line blogs, script writing, to film making. Writer, critic, film editor he has worked as a film critic on this second go around for 14 years. He earned his Bachelor’s degree at the college of Journalism and Communications at the University of Florida in Gainesville, Florida. John is an active member of the Southeastern Film Critics Association (SEFCA) . Favorite Films: Lord of the Rings/Hobbit trilogies, The Godfather trilogy, the Indiana Jones trilogy (I didn't like the 4th), The Avengers and for TV it's Game of Thrones. As for animation it's a tie between anything Pixar and everything Hayao Miyazaki.
Battle of the Sexes (Blu-ray) The Commuter