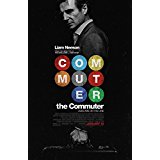 The year kicks off with its first major action thriller The Commuter, and it’s a barn burner.  Total action after an introduction to the plot, the film takes you on the ride of your life with surprises on every turn.  If you like gripping films that work on your mind to try and figure out who the perpetrator is and what they want, then this movie should be on the top of your list. And it’s way better than last year’s Murder on the Orient Express. It’s becoming a monotonous routine for Michael MacCauley (Liam Neeson), a former police officer and now a life insurance agent. He gets up early in the morning, spends only minutes with his wife Karen MacCauley (Elizabeth McGovern) and the children. He then boards the commuter train to his work. Every day, same train, same fellow passengers, and knowing he will be home that evening to be with his family, then the next day do it all over again.

But his life is about to become a rip-snorting wild ride, starting with getting fired from his ten year job because of company downsizing.  Disappointed and knowing it will be tough telling his family, it’ll be a different kind of return trip home. But little does he know how bad it will be.

He’s sitting in his seat thinking of what he has to do to provide for his family when a sultry woman, Joanna (Vera Farmiga), sits across from him and poses the question “What kind of person are you?” This simple hypothetical question leads to a mystery Michael must solve with a $100,000 bounty and his family hanging in the balance for the right answer.

The film gets very engaging and riveting as the long ride home turns into a chaotic out-of-control fight for his life.  Director Jaume Collet-Serra has worked with Liam Neeson in Run All Night and Unknown, both action films with high energy. Here he gets to put Neeson’s character and family in jeopardy as he looks for an unknown person on a train that’s headed for disaster. Collet-Serra’s challenge will be to get his audience engaged and then turn up the heat on the screen, which he nails.

However, with an actor like Liam Neeson there’s not much to do but hand him a script and point to the set.  He’s action personified, having acted with 119 credits to his name. Most of his movies are mostly action thrillers that either take your breath away or make you cringe as you grab onto your seat for the ride of your life. You can easily complain that he always plays the “same character”, and you would not be wrong.  But with Neeson, like Tom Cruise and Sylvester Stallone, you know what you’re going to get, and they always deliver. This year Neeson has two more films to be released, Hard Powder and Marlowe, both thrillers and more of his intense personality to enjoy.

The film has a lot of mayhem including outlasting well-choreographed fight scenes, breathtaking near death situations involving the railroad cars, and a train crash that will delight thrill fans and scare the pants off those that aren’t.  It all looks real, most of it with close-ups and intricate photography putting the audience in the turmoil as it develops. The special effects and stunts work seamlessly together, not missing a beat throughout each of the many conflicts that make the film exciting and spirited.

The Commuter has been rated PG-13 for some intense action/violence and language. There are several brutal scenes and a good measure of peril that may bother the timid, so take a friend along to clutch onto.

Another cool Liam Neeson action thriller. Be cautious when deciding to allow immature children see the film, as it does have some scenes that are inappropriate for youngsters.

John Delia has been on all sides of the movie business from publicity, writing for publications and on line blogs, script writing, to film making. Writer, critic, film editor he has worked as a film critic on this second go around for 14 years. He earned his Bachelor’s degree at the college of Journalism and Communications at the University of Florida in Gainesville, Florida. John is an active member of the Southeastern Film Critics Association (SEFCA) . Favorite Films: Lord of the Rings/Hobbit trilogies, The Godfather trilogy, the Indiana Jones trilogy (I didn't like the 4th), The Avengers and for TV it's Game of Thrones. As for animation it's a tie between anything Pixar and everything Hayao Miyazaki.
The Post The Houses October Built 2 (Blu-ray)