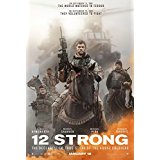 “Afghanistan is the graveyard of empires.”

You will hear it said several times throughout 12 Strong: For over 2000 years invaders and conquerors throughout history have attempted to bring the mountainous country under a foreign flag. The Russians had been the latest power to attempt to fight there, and in the 1980’s that war quickly became their own Vietnam. Such was the plight of the American armed forces after Bin Laden sent planes crashing into buildings on September 11, 2001. It was in that same harsh wilderness, the one that stopped czars, kings, emperors and even gods, where Bin Laden entrenched himself after the brutal attack on American soil. It was there that the first teams of soldiers went to stop his terrorist group from having the ability to do anything like that again. And yes, if we’re completely honest with ourselves, to exact a measure of revenge. 12 Strong is the story of the first 12 men who began to fight the war on terrorism on the ground, on horses and with little in the way of conventional warfare resources at their disposal.

12 Strong begins pretty much with the attack on 9/11. For most of us the startling images from news broadcasts and footage of the towers smoking are as vivid now as they were nearly 20 years ago. We don’t really need a reminder, but these opening moments serve two important functions for the beginning of the film. The most important of these is to introduce us to characters who will get little chance for background or development except through the non-stop action that is to come. The few minutes here give us a chance to humanize these soldiers through time spent with their families or friends. It’s not really enough to give us adequate pictures of these guys, but it’s all we’re really going to get, so it’s rather precious time, well spent. The more obvious purpose is to set the stage for all that happens next.

Chris Hemsworth stars as Captain Mitch Nelson, who is the leader of an elite 12-man squad. He has just requested another assignment, wanting to be able to spend more time with his family. When 9/11 happens, he wants nothing more than to remain in command of the brothers he’s trained with and to strike back against the terrorists. The problem, at least as his superiors see it, is that he’s also the only member of the team who has never seen actual combat. There’s concern that his inexperience will be a liability for what lies ahead. Support from his team, particularly a plea from his right-hand man Hal Spencer (Shannon) convince the brass to “forget” about his transfer request and allow him to remain as the team’s leader. Now he has to compete with several other team captains for the opportunity to lead the first group into Afghanistan. He manages to do just that, and before you know it the team is flying a perilous helicopter ride deep into enemy territory. It’s there that he meets up with our in-country allies led by General Dostrum (Negahnan). The two play a bit of a game of cat and mouse. Dostrum doesn’t see the killer instinct he believes necessary to get the job done, and Nelson has to prove himself once again. Now Dostrum will lead them to the key strongholds of Al Qaeda, where they must fight on horseback with only aerial support. They have three weeks before the winter makes the job impossible, and Nelson is determined to get the job done.

At first you might expect this to be a typical war movie, and there are certainly aspects of that to be found throughout. There is certainly no shortage of intense battle scenes. This is a Jerry Bruckheimer film, after all. But I found the movie to be more like a traditional western than a war film. It’s not just the horses. The movie was filmed in New Mexico, which was a pretty good move. The mountains and barren desert bring back memories of some of the old John Ford classics. There’s also a certain style here that often takes on the formula of a western more than a war movie. We have a relatively small band of fighters going up against concentrated strongholds of the enemy, and the fighting happens in that concentrated charge, shooting behind rocks and relics of broken buildings. These guys could be fighting banditos as much as terrorists. It’s a rather unconventional shooting style that smartly depicts this equally unconventional moment in modern warfare. Part of that has to be credited to director Nicolai Fuglsig, who is directing his first film here, and it’s one heck of a freshman outing. He’s obviously not been imbedded so much in the usual tropes and formulas of filmmaking. There’s a truly independent spirit to be found inside of this huge production, and I found it quite refreshing.

If there is a weakness here, it’s in the lack of character development. Fortunately we have a strong cast here that can carry that weight without the usual background. We might not know their characters well at all, but they know them very well, and most of the performances have that confident quality that fleshes them out on the run. Of course, I expected Michael Shannon and Chris Hemsworth to shine here, and they do. But this is a strong supporting cast that includes Michael Pena, William Fichtner, Geoff Stults, Trevante Rhodes and Thad Luckinbill. Numan Acar is rather insidious as Mullah Razzan. He’s the leader of this group of bad guys. His introduction says a lot about why we fought this war, and it’s not just about 9/11. The only true disappointment here is the horribly miscast Rob Riggle. I have no idea what he’s doing in a film like this. He’s a guy who always looks like he’s hamming it up, and that’s exactly what he does here. He plays one of Nelson’s commanding officers, and it looks like he’s mugging for the camera every time he’s on the screen. He’s terrible, and I’m not just saying that because he picked the Saints to beat the Vikings in the Divisional NFC playoff game. Big mistake, guys.

It’s not just the performances. Chris Hemsworth shares remarkable chemistry with Navid Negahban, who plays General Dostrum. The evolution of this relationship is truly one of the highlights of the entire movie. Much of the film’s message can be found in the interaction between these two characters. They share many of the film’s most powerful dialogs and become the film’s emotional center and heart. It’s the glue that holds all of this action and drama together.

We’ve seen plenty of war films over the years. There have been some quite remarkable efforts over the years, and I’m not going to tell you that 12 Strong will necessarily share that kind of a legacy. Based on the book Horse Soldiers by Doug Stanton, it does have that element of authenticity that even some of the great war films miss. So while not remarkable, it is memorable, and there are lessons to be learned here. “How do you love your family and leave them to go to war?”

Gino Sassani is a member of the Southeastern Film Critic's Association (SEFCA). He is a film and television critic based in Tampa, Florida. He's also the Senior Editor here at Upcomingdiscs. Gino started reviewing films in the early 1990's as a segment of his local television show Focus. He's an award-winning recording artist for Omega Records. Gino is currently working on his 8th album Merchants & Mercenaries. Gino took over Upcomingdiscs Dec 1, 2008. He works out of a home theater he calls The Reel World. Favorite films: The Godfather, The Godfather Part II, The Body Snatcher (Val Lewton film with Karloff and Lugosi, not the pod people film), Unforgiven, Gladiator, The Lion King, Jaws, Son Of Frankenstein, The Good, The Bad And The Ugly, and Monsters, Inc.
Crazy Famous Phantom Thread