Posted in: The Reel World by Brent Lorentson on January 19th, 2018 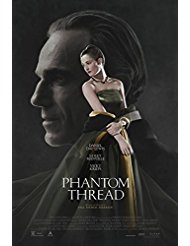 The film Phantom Thread may be flying under the radar for most cinema-goers, but this little gem is a nice distraction from the big-budget fare that floods the theaters. While I’m a fan of director Paul Thomas Anderson’s earlier work (Boogie Nights and Magnolia), the big draw for this film is the perhaps last cinematic performance we may see from Daniel Day-Lewis, who last collaborated with Anderson in the 2007 film There Will Be Blood. While I have to admit the trailers for this film didn’t inspire much excitement from me, it’s the pairing of Anderson and Day-Lewis I was more curious about. The result is one of the more unexpected film experiences I’ve had in sometime.

In 1950’s London, Reynolds Woodcock (Day-Lewis) is one of the most renowned dressmakers whom the social elite and royalty seek out.  From the start of the film we get a glimpse into Woodcock’s meticulous nature as we see him go about his morning ritual of getting dressed for the day. He’s an introvert, and at his side he has his sister, Cyril (Lesley Manville) to help attend to his needs and handle the staff and get rid of girlfriends when the time calls for it.  There isn’t much warmth between the brother and sister, but the two certainly work well together as Cyril seems to anticipate her brother’s needs at all times.

It’s when Woodcock meets Alma (Vicky Krieps) that things begin to change. When we first see Alma, she appears to be nothing more than a clumsy waitress who is tasked with taking Woodcock’s breakfast order, but we quickly see he has become enamored with her, and he asks her out for dinner. The date is not as it seems as it moves from the restaurant to his workroom where he undresses her to her slip, and with the aid of Cyril, he begins to take her measurements.  This scene I found equally charming and disturbing with Woodcock’s behavior, and it’s from this night that the relationship between Alma and Reynolds begins to take shape.  Is she simply a muse, or is there something more between the two? That is the first question that seems to be posed for the two, though Woodcock persists that he is and will always be a bachelor.

While the role of Woodcock may not have the same bravado we’ve seen from Day-Lewis as Bill ‘the Butcher’ (Gangs of New York) or Daniel Plainview (There Will Be Blood), the performance he brings to Phantom Thread is as intense as ever. Krieps manages to go toe to toe with Day-Lewis as the film unfurls into a weird, kinky game between the characters as they have a power struggle for who is in control of the relationship.  It’s the performances that drive this film. With a lesser cast this film simply wouldn’t work and instead would likely bore the audience to tears. But as I said, it’s the performances that make something as subtle as buttering toast seem excruciating and funny all at once.

Another star of the film, one we don’t see but instead hear, is Jonny Greenwood’s fantastic score he brings to the film. This is his fourth collaboration with P.T. Anderson, and it’s this score that simply moves this film so beautifully. The piano work does so much to evoke the mood of the 50’s, yet gives the film a haunting Gothic romance feel. Factor in the cinematography (which Anderson did himself) that seems to have a white haze throughout it to help set the mood for this film that is nothing like we’ve seen from Anderson before.

My first reaction as the final credits rolled was how much the film felt more like a Stanley Kubrick film than anything else.  It’s the third act of the film that really changes everything.  I’m not here to ruin the fun of where this film goes, but it’s certainly a twist that is wickedly playful while being unexpected. As for the ominous title and where it ties into the story, well, that’s something I feel can be up for debate. This film works as an example of art, where each of us can watch the same film and come away with our own interpretation.

Brent Lorentson is a horror writer and film critic based out of Tampa, Florida. With a BA in Digital Film, he co-wrote and co-directed Scavenger Hunt. His short stories have appeared in various horror anthologies. In 2019 his short script Fertile Blood will be a part of the anthology horror film Slumber Party. He is currently working on his first novel A Dark and Secret Place set to be released in late 2019. Favorite Films: Taxi Driver, Fight Club, I Saw the Devil, The Wild Bunch, Dawn of the Dead, A Clockwork Orange, Pulp Fiction, Heathers, The Monster Squad, and High Fidelity.
12 Strong Den Of Thieves