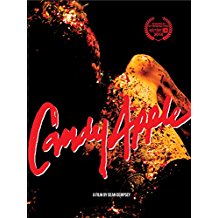 Low-budget films are typically very hit-or-miss for me. Sometimes the story is engaging from the beginning; other times the cinematography is so creative that I just can’t stop watching the movement of the camera. However, sometimes the film is extremely slow-paced and uninteresting. When it comes to Candy Apple, it is very difficult to place it on either of those two ends of the spectrum. From the outset, you can tell this film is extremely personal to the filmmaker, and while that might not draw in crowds, it opened up an infinite number of doors leading to creative freedom. That being said, I can’t say that I liked this film, but I can say that I couldn’t stop watching it.

Candy Apple follows a washed-up, amputee singer-songwriter, Texas Trash, as he makes his way around his new home: New York City. However, being a strange musician means that we are largely exposed to New York City’s underbelly. Throughout the film we learn that he has moved in with his son Bobby (played by director Dean Dempsey), and they both find unsavory ways of making ends meet. The “personal” aspect I mentioned earlier involves the fact that Texas Trash is Dempsey’s biological father, and many of the events that unfold on screen are inspired by true stories.

If it’s the case is that each of these stories are true, I will offer that they make for a very unique narrative. The film seems to be told in little vignettes of insanity, tied together by a very, very small string. Whether it be trying to get money to pay rent, indulging what money you do earn into your vices, or minor characters talking about some insane thing that they had witnessed earlier in the day, this film stops at nothing to refuse the audience any down time. The narrative unfolds like rapid fire, which is a wise directorial choice. You want to sit down and analyze what it is you just heard or saw, but the film itself won’t let you. This can be fairly annoying for some, but I feel it matches the fast-paced lifestyle of Trash and his attention span.

The question becomes: is this film entertaining? The answer, for the most part, is yes. The colors and the acting are flamboyant and fun, and the sitcom structure of the film’s humor are certainly favorable characteristics. But would I return to this film again? Most likely not. While I appreciate the narrative and acting, I don’t have the personal connection to this film in the same way Dempsey does. I did not see any universal truths being conquered, identifiable archetypes, or immersive cinematography, things that I want to see in films. What I did see is a director who had fun making a film, which realistically, is what kept me watching through till the end. It is very obvious that Dempsey poured a lot of heart into this film.

To be sure, the film is very low-budget, so I wasn’t expecting to be blown away. But for a film to hold my attention through colors, fast-paced conversations, and just strangeness in general is fairly impressive. Each one of those elements combine to deliver a unique experience that can only be given by Dempsey. It is worth a watch simply because the transition from your attitude of “what am I watching,” to feeling emotions for the characters happens so fast, as the film never stops to let you think. You are just along for the ride.