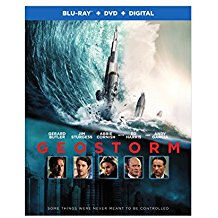 “Everyone was warned, but no one listened.”

These words — which are about as subtle as a tsunami — are heard in voiceover at the start of Geostorm, the latest effort from master of disaster (films) Dean Devlin. Yes, I realize no one should venture into a big budget flick produced by Dean Devlin (Independence Day, 1998’s Godzilla) looking for subtlety. But no matter what side of the climate change issue you fall on, Geostorm is equally offensive to all parties. And it’s not because of its politics or its shoddy writing, which gives that opening monologue to a character who ends up being completely inconsequential. It’s because this would-be blockbuster is shockingly short on both fun and spectacle.

In the near future, an unprecedented series of natural disasters results in a global coalition of leaders commissioning a system of satellites designed to control the weather. The satellite system, dubbed “Dutch Boy,” was spearheaded by American chief architect Jake Lawson (Gerard Butler), a maverick who activated the satellite system prior to receiving approval from the coalition in order to prevent a typhoon. As punishment for his insubordination, Jake is taken off Dutch Boy and replaced by his brother Max (Jim Sturgess), who works under Secretary of State Leonard Dekkom (Ed Harris).

The action jumps forward three years, just before the U.S. is due to turn over full control of Dutch Boy to the international council. It’s around that time that strange events start occurring, such as a village in Afghanistan being frozen solid and a deadly firenado appearing in Hong Kong. There’s also a deadly accident aboard the International Climate Space Station, which prompts Max to seek Jake’s help in investigating. What they uncover is a plot to sabotage Dutch Boy and use the system of satellites as a weapon.

Devlin, a longtime producer and screenwriter best known for the previously mentioned collaborations with director Roland Emmerich, makes his directorial debut here. And it’s almost as if Devlin felt that Emmerich’s own climate change blockbuster, 2004’s The Day After Tomorrow, wasn’t quite on-the-nose enough. Both movies are dopey and ridiculous, but The Day After Tomorrow pulled off its ridiculousness with panache.

Geostorm, on the other hand, is a dumb conspiracy thriller disguised as a campy disaster flick. Way too much of the movie’s 109-minute running time is spent with the Lawson Bros. investigating and trying to uncover the saboteur behind Dutch Boy’s malfunctions. (It doesn’t help that the movie’s villain is painfully obvious.) More importantly, way too little of the movie’s energy is devoted to the sort of larger-than-life devastation that became Devlin’s calling card.

Yes, the frozen village in Afghanistan is a cool visual, as is the firenado in Hong Kong and the icy wave in Rio. The problem is those calamities occur very quickly and with practically zero build up. Contrast that with Independence Day, which spent most of its first hour building up its alien invasion. And except for a lightning storm in Orlando towards the end, most of the destruction in Geostorm happens to a string of anonymous characters we don’t care about since Jake is stuck in the space station trying to find a solution and Max is working behind the scenes to uncover the saboteur.

Of course, there’s a longstanding tradition of charismatic (Will Smith in Independence Day) or even game performers (Dennis Quaid and Jake Gyllenhaal in The Day After Tomorrow) helping elevate this sort of shlock. Unfortunately, none of those people can be found in Geostorm. I continue to be dumbfounded as to why the Scottish Butler keeps getting cast as an American. Ordinarily, I’d say, “Just let Butler do his natural Scottish accent!” but the truly ludicrous Jake Lawson is supposed to be a uniquely American rebel. (“Ok, fine…then cast an American!”) As a result, Butler and the Sturgess (who is English) are constantly pitted against each other in a Bad American Accent contest that Butler always seems to win.

The rest of the cast doesn’t fare much better. Abbie Cornish co-stars as Max’s Secret Service Agent girlfriend, but the Aussie actress is so stiff here that she appears to be playing a Terminator. Meanwhile, you can practically hear Harris and Andy Garcia as U.S. President Andrew Palma mentally cashing their paychecks. In fact, the only performer who even comes close to looking and behaving like an actual human being is Atlanta‘s Zazie Beetz, who plays a snarky and incredulous cybersecurity expert who helps Max with his investigation. I probably connected the most with her because “snarky” and “incredulous” were essentially my two main reactions to Geostorm.

Geostorm is presented in an aspect ratio of 2.40:1. The 1080p image is arrived at with an AVC MPEG-4 codec at an average of 30 mbps. For what is supposedly a globe-spanning adventure, Geostorm sure does feel claustrophobic. Yes, we get the snippets of mayhem and destruction promised by the trailers. But they are all too brief, and the clean presentation here actually highlights the movie’s CGI shortcomings. Otherwise, much of the action takes place inside the space station and other underlit interiors. While fine detail is quite strong in these scenes, the movie’s overall visual presentation is underwhelming. Even the brief sequences set in “Afghanistan” and “Rio de Janeiro” feature harsh, unconvincing color grading.

The DTS-HD Master Audio 5.1 track is the best thing about this disc, but even this aspect of the Blu-ray release left me scratching my head. Because if there’s any movie that could be bolstered by the 7.1 soundtrack treatment, it’s Geostorm. To be fair, the existing 5.1 track more than holds its own from the very beginning; there’s a room rattling rumble before the movie even technically starts to accompany the Warner Bros. logo. And once the titular storm starts to wreak havoc on screen, the track remains as balanced as it is dynamic while lowering the boom across all channels. But just like Geostorm refused to fully embrace the campiness of its premise, I couldn’t shake the feeling that this 5.1 track was unnecessarily holding itself back.

Wreaking Havoc: (6:30) This featurette focuses on the visual effects behind the movie’s “unnatural disasters.” With apologies to Gerard Butler, Jim Sturgess, Andy Garcia, and the rest…the visual effects are the real stars of the show here.

Search for Answers: (4:13) Features director/co-writer Dean Devlin discussing the real life “what if” — What if we wait too long to deal with climate change? — that inspired the movie. The real highlight, however, is Butler popping up to explain what a “geostorm” is with a straight face.

An International Event: (5:40) Since the crew aboard the International Climate Space Station features scientists and engineers from all over the world, Geostorm lent itself to having an international cast. This featurette largely focuses on the actors who played the space station crew and how well they all got along with each other.

Geostorm is a disaster flick in every sense of the word.

I wasn’t expecting Devlin and Co. to deliver high art, but I was at least hoping for some mindless fun. But instead of thrilling us with its grandeur and imagination, Geostorm will leave you colder than those frozen villagers in Afghanistan.