Posted in: No Huddle by Gino Sassani on February 2nd, 2018 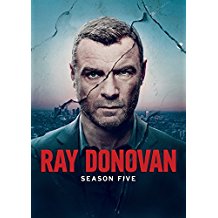 Ray Donovan (Schreiber) is a Boston native who moved his entire family including his two brothers out to L.A. There he built an empire by being very good at what he does. What he does is fix problems, particularly for big-name celebrities and the lawyers who coddle represent them. His father has spent 20 years in jail for a crime he might not have actually committed. But Ray hates his father enough to have set him up and sent him to jail. A pattern Ray has continued over four years of the show. Ray has a wife, Abby (Malcomson), whom he keeps at arm’s length of his dubious business dealings. He also has a son and daughter who are somewhat conflicted in their feelings for their father. You don’t want to start here if you are just experiencing Ray Donovan for the first time. In fact, this year is one of the best in the show’s 5-year run to date. You really want to get caught up so you can appreciate some emotional drama as Ray Donovan The Complete Fifth Season comes to DVD. You get all 12 episodes on four discs.

The entire style of storytelling has changed for this season. It’s not a spoiler to reveal here that Abby dies of the cancer she discovers in the previous season. Not only isn’t it a spoiler, but it becomes the very event that changes how the show is presented. Ray is living two lives now. In one life he is haunted by the memories and ghost of Abby. That story shows us crucial moments in those final months of Abby’s life and allows her character to continue through the entire season even though she begins it already dead. Many of these moments are repeated, revealing slightly more of their meaning over the season. They are usually tied to events in the current time and most often associated with Ray’s guilt and loneliness.

There is a more current timeline that runs during these episodes that takes us along the lines of Ray’s first widower months and the evolution of the rest of the cast. Part of that guilt is connected to his relationship with actress Natalie James, played by Lili Simmons. She’s a young woman with a lot of trouble, much of it of her own making. Ray gets a little too close and is drawn in by a need to protect someone even as he couldn’t protect his wife. Not that he doesn’t try. We learn he attempted to rig a trial study to help Abby, but the one thing Ray learns this season is that he’s not really in control at all. So most of Ray’s time is spend sheltering Natalie and being a go-between for two Hollywood moguls going through a split.

Of course, John Voight’s Mickey is going to be causing his own trouble. He continues to be the morbid fascination of the show. He’s a completely bad guy who honestly thinks he’s not. He’d sell out anyone for his own gain. This year Mickey has written a script about a tough Irish guy. When Ray’s not available to help one of his clients out of a jam, Mickey seizes the opportunity to blackmail the actor into making his movie. The script is horrible and filled with every cliché in the book. With no other choice, the actor takes on the project, but tempts Daryl (Hall) into coming on board, and it ends up a 70’s blacksploitation film that infuriates Mickey. Pooch Hall steps up his own game as Daryl. He knows Mickey is taking advantage of him, and he’s always kind of gone along with his schemes because he wants to belong. This season he finally shows a bit of that defiance you always hoped he would.

Bunchy ends up taking care of the baby while his wife ends up on a wrestling tour. Dash Mihok is another strong performer, and he breaks your heart most of the time he’s on-screen. He’s the most caring member of the family, and he always ends up in the most trouble by trying to do the right thing. This year he gets robbed of his $1.2 million settlement and also ends up running Abby’s bar when she’s gone. You just can’t help but be moved by this performance. A lot of it is in the eyes, and he doesn’t really have to say anything to deliver.

Terry has undergone a surgical implant procedure that allows him to cover the shakes of his Parkinson’s disease with a remote control. This is a milestone year for Terry, who ends up on Ray’s bad side by making a big decision that changes all of their lives. Terry’s about had it, and Eddie Marsan delivers another quietly powerful performance.

Finally, Bridget (Dorsey) has a lot to do this season. She’s had to take the emotional role that Abby filled for the family but has her own issues and guilt to deal with. She ends up in New York, hooking up with a guy who has the same cancer that killed her mother. The boy ends up being closer to what happened to her Mom than you will suspect. It’s a plotline that pushes Kerris Dorsey to step up big-time in the role.

Seldom has this series been so moving. Sure, there are always the tragic stories, and the things that happened to the Donovan brothers when they were kids is pretty heartbreaking. But this season we see a different side of everything. It’s a rather bold direction for the series and honestly would have made the perfect final season for the show. There is a 6th season on tap, and it will be quite interesting to see where they go from here. This was without a doubt Ray Donovan’s best season. For four years we’ve seen Ray and Mickey do some pretty messed up stuff. “So, action, meet consequence.”

Gino Sassani is a member of the Southeastern Film Critic's Association (SEFCA). He is a film and television critic based in Tampa, Florida. He's also the Senior Editor here at Upcomingdiscs. Gino started reviewing films in the early 1990's as a segment of his local television show Focus. He's an award-winning recording artist for Omega Records. Gino is currently working on his 8th album Merchants & Mercenaries. Gino took over Upcomingdiscs Dec 1, 2008. He works out of a home theater he calls The Reel World. Favorite films: The Godfather, The Godfather Part II, The Body Snatcher (Val Lewton film with Karloff and Lugosi, not the pod people film), Unforgiven, Gladiator, The Lion King, Jaws, Son Of Frankenstein, The Good, The Bad And The Ugly, and Monsters, Inc.
Cloverfield (UHD Blu-ray) (4K) 10 Cloverfield Lane (UHD Blu-ray) (4K)