Posted in: Disc Reviews by Gino Sassani on January 29th, 2018 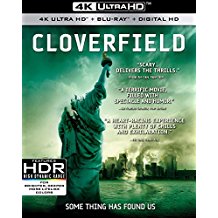 It might be hard for me to admit, but there are certain instances where having an ultra-high-definition transfer of even a modern film is not necessarily a better thing. The UHD 4K release of Cloverfield is one such instance. There is no question that the transfer is about as sharp and clean as anything I’ve seen on Blu to date. The problem is that it only helps to accent the stylistic flaws inherent in this kind of film. The most noticeable improvement is in the first third of the film. Of course, that part of Cloverfield is about as entertaining as watching paint dry. I still don’t care about these characters and their party ramblings any more now than I did before. The fleeting shots of the creature do look better, but you still better hit the pause button if you want a good look.

The entire film takes place inside the camcorder of a character named Hud (Miller). Hud was given the recorder to document the goings on at a farewell party for Rob (Stahl-David). Rob is about to leave New York for an executive position at a company in, of all places, Japan. I suspect the destination to be one of many Godzilla nods Abrams offers in the film. Hud is doing his duty diligently when the building shakes and half of New York loses power. A television report informs the partiers that an oil tanker has overturned in the harbor near Ellis Island. The people take to the streets, and from here on all of the events are seen only through the lens of Hud’s camcorder. We’re treated to rather fast-paced and too often jarring images of New York crumbling around these people. Buildings collapse in images eerily reminiscent of 9/11. There are explosive fireballs and screaming jets overhead. We hear someone cry that “It’s alive,” and from that moment we get very fleeting glimpses of the large creature causing all of this devastation. It is also shedding smaller parasite creatures that find tasty humans throughout the city. We never really know what this creature is or where it came from. We honestly never get very many good looks at it. Rob wants to go across town and check up on his girl, Beth (Yustman). Wherever our small troop goes, it seems the creature is never far behind.

I thought the idea was great, and I really wanted to love this film, but there were several serious problems that kept that from happening. The film begins far too slowly. For over 15 minutes we see Hud trying to get testimonials from the party attendees, and we get a lot of small talk. Instead of using the time to build real believable characters that we can care about once the mayhem begins, we get the most boring minutiae of their lives. I have to tell you, I really wanted to turn the thing off after the first ten minutes. Even with all of that prep time we only know the most shallow details about these people, so that it is difficult to care what happens to them. All of them are incredibly interchangeable to the point where losing any character was no big deal. I agree that it was a good idea to get relatively unknown actors, particularly with the style used for the film, but too much of this stuff looked improvised and pretend. The next huge problem is the style of the film itself. We all know The Blair Witch Project by now, and in case you forgot how hard that shaking camera stuff was on your head, Abrams wants to remind you with even worse camera shake, rattle, and roll. I’m not sure the dismal camera work ended up being worth it to keep the “captured on video” thing Abrams wanted to have going here. Finally, I wanted to see and know more about the monster. Yes, less is often more. Often it’s what you don’t see that scares you, but Abrams never created the atmosphere for that to be effective. This is Godzilla, not Aliens, and we want to see the big bad.

There was a lot of hype for this film before it came out. Everyone remembers the simple 01-18-08 ambiguous teasers and trade magazine campaigns. Abrams effectively got a lot of free buzz going before anyone even knew what the film was about. The crew even planted internet rumors that the date was a secret project to do a new American Godzilla film. Once the secret was out, the pre-release machine kept rolling. Internet videos reportedly taken from “secret footage” cropped up, and who can forget the dramatic image of the head of the Statue of Liberty being tossed to the street? Unfortunately that was one of the film’s more stunning moments, and we had all seen it before the film was released. Abrams really needed to keep that one back.

Cloverfield is presented in its original aspect ratio of 1.85:1. The ultra-high-definition 2160p  image is arrived at by an HEVC codec with an average bitrate of an astonishing 75 mbps. From beginning to end this is an incredibly vivid transfer. Colors pop, and flesh tones are dead on reference. The most remarkable improvement is in the black levels. There is a decidedly impressive increase in shadow definition, and you can see things a bit more clearly. Of course, even this solid transfer doesn’t improve on the camcorder style and imperfections that are intended on the film. That’s why I have a hard time recommending this one as an upgrade worth spending the money on.

The Dolby Digital TrueHD 5.1 track   runs at an awesome level. This time the subs pop like I had expected from previous releases. Jet engines, explosions, and, of course, the creature all deliver huge audio output. Along with all of this louder presentation you gain clarity. Dialog is far easier to understand. I had slight trouble in the original due to the nature of the style. Unfortunately a few of those style issues still exist. There is still a fair amount of clipping at times.

The extras are all on the Blu-ray copy of the film and are the same as the previous Blu-ray release.

The thrill ride is there, this time in glorious UHD, but not really. Check it out, if you must. No matter what I say, “People are going to watch this.”

Gino Sassani is a member of the Southeastern Film Critic's Association (SEFCA). He is a film and television critic based in Tampa, Florida. He's also the Senior Editor here at Upcomingdiscs. Gino started reviewing films in the early 1990's as a segment of his local television show Focus. He's an award-winning recording artist for Omega Records. Gino is currently working on his 8th album Merchants & Mercenaries. Gino took over Upcomingdiscs Dec 1, 2008. He works out of a home theater he calls The Reel World. Favorite films: The Godfather, The Godfather Part II, The Body Snatcher (Val Lewton film with Karloff and Lugosi, not the pod people film), Unforgiven, Gladiator, The Lion King, Jaws, Son Of Frankenstein, The Good, The Bad And The Ugly, and Monsters, Inc.
Goodbye Christopher Robin (Blu-ray) Ray Donovan: The Fifth Season