My Entire High School Sinking Into The Sea (Blu-ray)

Posted in: Disc Reviews by Brent Lorentson on February 4th, 2018 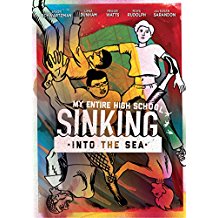 When coming into this film you need to put aside any expectations of seeing your typical Pixar or Dreamworks animated film.  This is arthouse animation that is filled with originality while attacking the clichés we see in big-budget disaster films.  I didn’t really know what to expect from this film, but with a voice cast that includes Jason Schwartzman, Lena Dunham, Reggie Watts, Maya Rudolf, and Susan Sarandon it was such an odd mix that my curiosity couldn’t resist. So is the trippy animated film a success, or is it a dud destined to sink into obscurity?

The film runs at 77 minutes which leaves the film little time to set up characters and plot, but somehow the film still manages to give us a group of fully-fleshed-out characters; though they are a bit exaggerated, they remain relatable. Dash (Schwartzman) and his best friend Assaf (Watts) are returning to school with hopes of being more accepted and respected than they were the previous year.  The friends work together on the student newspaper where Dash enjoys writing exaggerated pieces while his friend prefers to stick to the facts and not blow the story out of proportion. It’s because of Dash’s flare for exaggeration that it’s difficult to find students to believe him when he discovers the school is in danger of falling into the ocean.

Once the school begins its fall into the ocean, the film kicks into full action-movie gear and is filled with some brutal deaths throughout. But even though this is about the school sinking into the ocean, the heart of the story still is about Dash and Assaf’s friendship and about the challenges of surviving the day-to-day life of high school (even when not facing a disaster).

The animation is what is going to be the films biggest challenge for audiences. The film isn’t for younger kids, but for some adults this may just come off as being too trippy and strange.  While the visuals are definitely unique, and there is certainly a style on display here, I’m simply at a loss between deciding if I like the look or not.  The visuals are so extreme at times that the filmmakers even put a warning at the start of the film about the possibility of epileptic seizures. While I can appreciate what the filmmaker created here, I’m just not certain about its appeal to a wider audience.

My Entire High School Sinking Into The Sea is presented in the aspect ratio 1.85:1.  The 1080p image is arrived at with an AVC MPEG-4 codec at an average of 34 mbps.  This isn’t a standard CGI film; instead everything was hand-drawn, and we get some thick and defined lines as well as some beautiful and odd imagery at times.  The colors for the most part though never seem to pop; instead they appear rather dull.  Though there is a sequence later in the film from the perspective of a character drowning that is the visual high point when it comes to getting value out of a Blu-ray rendering.

The DTS HD-Master Audio 5.1 track is has clear audio from all of the voice talent and has a nice quirky score supplied by Rani Sharone. While the sound FX do help move the story along, for a disaster film this isn’t on par with what you’d get from your Hollywood blockbuster, though the sound design is reasonably done for an independent film.

Commentary with Dash Shaw: Dash Shaw offers up plenty of information about what got him into animation and his influences on the making the film.

The Art of My Entire High School Sinking Into the Sea: (13:08) An interview with the director and animator along with his wife and animation partner.  It’s a discussion about the unique looks of the film and the challenges in completing the film.

Short Films By Dash Shaw: A collection of short films by Dash Shaw that reflect his unique style. There are five shorts in total, all running about a minute apiece.

I ended up watching this one a second time before really coming to my decision on it.  The film has a charm to it that won me over.  I understand this film isn’t for everyone, but for those willing to give something weird a chance, I feel this is something you can walk away from enjoying.

Brent Lorentson is a horror writer and film critic based out of Tampa, Florida. With a BA in Digital Film, he co-wrote and co-directed Scavenger Hunt. His short stories have appeared in various horror anthologies. In 2019 his short script Fertile Blood will be a part of the anthology horror film Slumber Party. He is currently working on his first novel A Dark and Secret Place set to be released in late 2019. Favorite Films: Taxi Driver, Fight Club, I Saw the Devil, The Wild Bunch, Dawn of the Dead, A Clockwork Orange, Pulp Fiction, Heathers, The Monster Squad, and High Fidelity.
The Guardian: The Complete Series 9/11