Posted in: The Reel World by Gino Sassani on February 15th, 2018 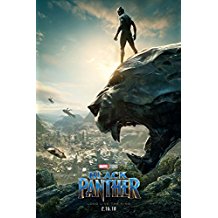 Stan Lee and Jack Kirby created the comic book character of Black Panther in 1966 for an issue of The Fantastic Four. He became the first black superhero in the comic world. He starred in Marvel’s Jungle Action title before getting his own comic. The character was popular, but through an unfortunate set of circumstances he was at times thought to be related to the militant group of the same name that popped up that same year. For a short time he went by the name Black Leopard, but the original name rose above the unintended connection and continued to enjoy on and off success over the decades. Black Panther was introduced to the MCU (Marvel Cinematic Universe) with Captain America: Civil War. He’s finally getting his own film, and with the release of Black Panther, the MCU is developing and evolving in new and interesting ways. It’s all leading to the May release of the third Avengers film and eventually into an entirely new MCU. That’s a lot to ask of a single film. Is Black Panther up to the task?

In Captain America: Civil War we see the death of King T’Chaka (Kani) of the African nation of Wakanda. We are also introduced to several other elements of this story. We learn that Wakanda has a precious resource called Vibranium, which can be used to create objects of great power…or great destruction. We also meet briefly Ulysses Klaue, a mercenary who intends to steal great quantities of the mineral, played rather fiendishly by Andy Serkis. Most importantly, we were introduced to T’Chaka’s son and future king T’Challa, played by Chadwick Boseman. These are all short and minor breadcrumbs placed into the larger tableau of that rather busy film. You might call them teasers, but most of us considered them appetizers intended to get us ready for this  film to bring all of those elements together and tell us a unique new Marvel story, and that’s exactly what Black Panther does.

Because the elements of this title were introduced in Civil War, we are spared the time-consuming trouble of an origin story. There is a rather clever prologue that uses a cool Wakanda imaging technology to fill us in on the mythological origins of Wakanda and its ruler. This is a hologram-style device that presents images that appear out of grains of a sand-like substance. It’s used in much of Wakanda technology including their communication and playback devices. It’s as if we’re being told a fairy tale until the camera takes us from this animated story into a majestic city with technology that resembles Ridley Scott’s Bladerunner, particularly the magnetic trains that transport the population and cargo of Wakanda. We also learn that the nation is shielded from prying eyes so that the world does not know that it’s such an advanced civilization. And that’s where the film’s inner conflict comes from.

As T’Challa is about to take on the crown of his nation, we discover there is already a debate within the nation. There’s a faction that believes the nation should come out of hiding for the benefit of others exploited and oppressed throughout the globe. They want to arm these “resistance” fighters and put Wakanda in its “rightful” place as leader of a new world. Of course, T’Challa believes the fight can be fought better on an intimate stage and that Wakanda must maintain its secrets. Of course, he’s the king, so that settles that, yeah? Not so much.

We learn that King T’Chaka once made a mistake and kept his own secrets. The result was a young Wakanda boy growing up with bitterness and anger toward the world and the status quo in Wakanda. Years later he is known as Warmonger because of his ruthless talent for killing. Used by the CIA and other underground organizations, he has decorated his body with the scars of hundreds of people he has killed. He wears their deaths with pride and is ready to challenge T’Challa for the leadership of Wakanda. And we know which faction is going to like the sound of that. It’s this inner struggle, another civil war, that dominates the narrative of the film.

Along the way T’Challa demonstrates his skills going after Klaue, who has stolen tons of Vibranium and is about to sell it to the highest bidder. Unfortunately, this part of the story serves something different than actual plot. Sirkis’s Klaue is one of the MCU’s better villains, but he’s used up too quickly here in order to serve the larger story of the inner struggle of Wakanda. There’s a nice James Bond kind of vibe going on in this part of the film that I hope Marvel’s revisits in the future. T’Challa’s sister is an excellent Q. There’s a complete Bond homage sequence where he visits her shop and she shows off her latest gadgets and inventions. It’s nice stuff that should be developed more in the future. T’Challa even ends up with his own CIA version of Felix. Martin Freeman puts in a very nice performance as Agent Ross who gets caught up in more than he ever expected. He’s the fish-out-of-water character here that provides both a little comic relief and our entrance as outsiders into the story. None of this is what really matters in this particular story.

It comes back to that division in Wakanda that Warmonger serves to exploit. Warmonger is a pretty down-to-earth bad guy and a bit out of the mold of the usual Marvel big bads who are out to dominate this or that to feed a superhuman ego. He’s driven by a real angst that Michael B. Jordan manages to deliver with both the expected over-the-top bravado and an unexpected amount of subtle touches that make him the most realistic villain the MCU has conjured for us in the past. Credit the actor for giving us a fully developed foil driven by human emotions and even a genuine drive to fight a real injustice. We can’t fault his arguments. This is a battle of solutions, and it plays out better than I expected it would. It becomes a great vehicle for Boseman to show us exactly who Black Panther truly is without resorting to technobabble or exposition. Ryan Coogler does an impressive job of showing us instead of spending over two hours telling us.

Does the film enter into some preachy moments? Yes. There are a few political stabs, and they come off with varying degrees of hard-handedness. There’s a pretty solid message of unity, and the narrative makes a few pointed statements that might push a little too hard in a political direction. Fortunately, it could have been much worse, and it’s hard to argue with most of the message, so you won’t feel like someone was trying to beat you over the head…too much.

This is a strong cast all the way down the line. Forest Whitaker provides another strong character that we don’t really see enough. Letitia Wright is a scene stealer. She plays T’Challa’s Q-minded sister, and the chemistry she has with Boseman is compelling. She’s mostly been a television actor in the past, so I was completely unfamiliar with her work. She’s good, and I hope this film serves as a launching platform for her career. Angela Bassett is not so much of a surprise. She’s been good for a long time. She plays Mom.

The special effects are the usual Marvel magic. The Wakanda technology dominates screen time here, and while it is all quite captivating, it goes a little too far. We could lose about 20 minutes of the “admiring Wakanda technology” moments here, and the shorter film would be the better for it, and I suspect cost a lot less in the bargain. No one is worried about cost here. Dropped in a quiet February street date, the film will dominate at the box office for weeks. It’s a unique look that combines the primitive with the ultra-modern. It absolutely works. This doesn’t look like any other Marvel film you’ve seen so far. There was no need for any of the other superheroes to drop in, and the only Marvel cameo you’ll find in the actual film is the usual Stan Lee appearance. Smart move to let this one stand on its own.

While this is not a great film and won’t top the MCU list, it is a very important film. The MCU has survived by its willingness to take chances and change things up. It’s a universe that needs to expand but also to grow and evolve. Black Panther expands that universe by adding a great deal of culture and a kind of spirituality to the whole. I’m eager to see how this strengthens the on-screen universe, and I’m excited to see it all interact. After so many films it hardly seems possible that the best may be yet to come, but that’s the feeling that I got from seeing Black Panther. This is one of those “Gentleman start your engines” moments, and I’m frankly ready to see more. There are two stingers, so stay for all of the credits. This is a good film that offers more than the usual amusement-park ride. There’s a lot of heart here. “Just because something works does not mean it can’t be improved.”

Gino Sassani is a member of the Southeastern Film Critic's Association (SEFCA). He is a film and television critic based in Tampa, Florida. He's also the Senior Editor here at Upcomingdiscs. Gino started reviewing films in the early 1990's as a segment of his local television show Focus. He's an award-winning recording artist for Omega Records. Gino is currently working on his 8th album Merchants & Mercenaries. Gino took over Upcomingdiscs Dec 1, 2008. He works out of a home theater he calls The Reel World. Favorite films: The Godfather, The Godfather Part II, The Body Snatcher (Val Lewton film with Karloff and Lugosi, not the pod people film), Unforgiven, Gladiator, The Lion King, Jaws, Son Of Frankenstein, The Good, The Bad And The Ugly, and Monsters, Inc.
Animal Kingdom: The Complete Second Season Tuesday Round Up: February 20, 2018