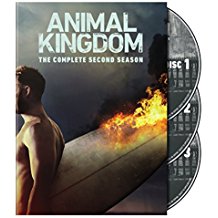 Meet the most dysfunctional crime family since The Sopranos. Not quite at the same level either on-screen or in quality, but once again we’re drawn toward another dangerous clan with criminal intent. I guess we could call them The Baritones. Actually, Animal Kingdom is an apt description for television’s latest baddies. They’ve now wrapped up their second season of mayhem on TNT where the series was the network’s top ratings winner. Now that second season is out from Warner Brothers, and it’s another crazy ride, of that you can be certain. It’s based, rather loosely by now, on an Aussie film starring Guy Pearce.

Meet Josh Cody (Cole) His mother was a junkie who died of a heroin overdose. Josh called his estranged grandmother, who goes by the name Smurf, and is played by Ellen Barkin. Smurf takes him into her home, but it’s not the Waltons. Smurf is a regular Ma Barker. She organizes criminal jobs that are carried out by her four sons. She collects the money and doles it out on an allowance basis. Her right hand is adopted son Barry, who goes by Baz (Speedman). He helps plan the jobs and is the only one with a family of his own. His girlfriend has mysteriously left him alone with a young daughter. If you saw the first season, you know what happened to her, and that secret is about to come out. Brother Pope (Hatosy) has just returned home from over three years in prison. He took the fall for the entire family, but he’s off his meds and is quite crazy. He’s by far the quietest brother, and the most dangerous. Brothers Darren (Weary) and Craig (Robson) are pretty much interchangeable bookends. They end up doing the heavy lifting, but they also are the hardest partiers in the family. From coke to jumping out of planes, these two do everything fast and furious. His uncles are not quick to trust Josh, and he has to find a balance with very little time to breathe.

This year finds the brothers in growing more and more dissatisfied by the family dynamic. Baz has started to get his brothers to question Smurf’s leadership. They decide to strike out on their own, but it’s not really going to be that easy. The brothers can’t really get along enough to work as well as they did, so they pull jobs that invariably mean at least one of them bowing out. The real wild card here is Josh, who is being played by Smurf, who has her own way of pulling on the strings of her criminal brood. We never quite know which side Josh is on, and he plays it pretty cool. But even that comes with hard consequences.

Smurf has been keeping an old secret, and an expected death brings it all out in the open. Before long there is a war between an Arizona gang and the Colbys. There’s going to be blood and plenty of both intended and unintended consequences. It’s even worse when Baz finds out what happened to his girl. If you could describe this season in one word it would absolutely be “war”. Sides are not always clearly drawn, and everyone has their own reasons, and the result is plenty of violence.

There are a couple of big heists this season, and both play out over a few seasons. Credit the showrunners for allowing us time to savor each of these jobs instead of pushing to create a kind of “job of the week” scenario. Of course, if you miss an episode it puts you behind, but it is a fun ride when you have it all on DVD and can watch at your own pace. Here at Upcomingdiscs, that’s usually at binge speed.

The first big heist involves a large church which is having an annual fund drive that will put hundreds of thousands in the safe. Pope goes inside and befriends a woman who works for them. Unfortunately, those feelings turn real, and it leads to trouble. The second big heist involves attacking a catered wedding at sea. It’s a pretty complicated affair, and it’s visually cool to see them pull it off. Cody is the inside man this time and gets a job at the catering service. These jobs usually require a drug test, and Cody has his own imaginative way of passing this barrier.

Shawn Hatosy continues to be the most dynamic and my favorite performer on the show. He’s not just a crook. He’s actually quite the psychopath, but he’s beginning to form a bit of a conscience here. I’m not sure you could really call it that, but Hatosy evolves this character is fascinating ways. There’s something morbidly compelling about him.

Finn Cole has the toughest job to do on the series without doubt. The actor has to find a voice for Josh that allows us to witness this world through his eyes. It’s not an easy job. The characters are all larger than life for the most part, and it’s kind of tough to lay back and be noticed. Give the kid some huge credit. He’s swimmin’ with sharks here and manages to cut through enough to pretty much be the storyteller. He must be exhausted after a day’s shooting with this cast and these stories. Still, there’s strong material here for him.

This year Molly Gordon gets to expand on the Nicki character. Craig and Deran involve her in the boat heist, and she gets to join in on the action, at least a little.

You get all 13 episodes on three discs. There are some deleted scenes, but there is a bizarre twist. I’ve seen deleted scenes in various forms and stages of production, but I don’t know what I’m seeing here. The dialog is out of synch, and I mean by a lot. We’re talking several full seconds, and it’s a bit hard to watch. There’s also a short profile on the Pope character. This one ends with a big game going between Baz and Smurf that might bring down the entire family. As Don Henley once said: someone’s going to emergency; someone’s going to jail. It’s a big cliffhanger, and we can’t wait for the next episode run. “May we all get what we want and never what we deserve.”

Gino Sassani is a member of the Southeastern Film Critic's Association (SEFCA). He is a film and television critic based in Tampa, Florida. He's also the Senior Editor here at Upcomingdiscs. Gino started reviewing films in the early 1990's as a segment of his local television show Focus. He's an award-winning recording artist for Omega Records. Gino is currently working on his 8th album Merchants & Mercenaries. Gino took over Upcomingdiscs Dec 1, 2008. He works out of a home theater he calls The Reel World. Favorite films: The Godfather, The Godfather Part II, The Body Snatcher (Val Lewton film with Karloff and Lugosi, not the pod people film), Unforgiven, Gladiator, The Lion King, Jaws, Son Of Frankenstein, The Good, The Bad And The Ugly, and Monsters, Inc.
Broad City: Season 4 Black Panther