Posted in: The Reel World by Brent Lorentson on February 24th, 2018 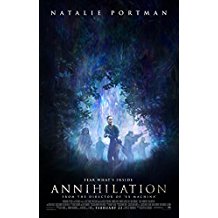 Going into Annihilation a couple days ago I had only seen the trailer once but was excited for it based on the strength of Alex Gardner’s first directorial effort Ex Machina. The film is based on a series of books that I had never read, and from what I understand the film takes many liberties with the storyline and characters. As his sophomore effort behind the camera, there were high expectations for what Garland would do, and the result I believe is one of the most divisive films I’ve seen in a while. This is the kind of film that gets me excited for the future of cinema, not just because I loved the film, but I love the conversation it can provoke with other filmgoers.

The film has a non-linear narrative; really, this is my only complaint, since it opens virtually where our story is nearing its end. While I usually don’t have a problem with this kind of storytelling, I’m annoyed by it this time around, because all the suspense around the survival of our lead is stripped away. The film still manages to squeeze in some head-spinning surprises at the end, so I can easily put my one measly complaint aside.

When we meet Lana (Natalie Portman), she is being observed and interrogated about her experience inside The Shimmer. Prior to her venturing into The Shimmer, no one else has made it out alive, with the exception of her husband (played by Oscar Isaac), though when he returned there was something wrong with him, and we later find out this is what motivates Lana to venture into The Shimmer in the first place.

So what is The Shimmer?

A meteor crashes along the coastal side of America. Because of the swamps we see later in the film, I’m going to guess the crash was in Florida. Following the crash, a barrier is formed that is constantly expanding. The military and its top scientists are trying to understand what it is, but they are turning up nothing.

Cue the all-woman team that Lana joins to investigate The Shimmer. Jennifer Jason Leigh comes into the film playing a psychiatrist who is tasked with interviewing candidates for the team to venture into The Shimmer. This time around Dr.Ventress (Leigh) elects herself to be on the team. Also joining in on the adventure is Anya (Gina Rodriguez) as the muscle for the team, Josie (Tessa Thompson), the shy brains of the group, and Cass (Tuva Novotny). The group works well together, and when we see them venture into The Shimmer, as much as we like them, we know not all of them will be making it out.

As for the inside of The Shimmer, it is a beautiful and dangerous world that is meant to be appreciated on the big screen.  What came to mind is when we first saw the world of Avatar how beautiful it was and how it sparked the nearly endless possibilities that could occur in this world.  Garland doesn’t waste time by showing us just how dangerous this world can be, and it’s one heck of an intense scene, but that is nothing compared to what is to come.

While the interactions with the women and their adventure into The Shimmer are great, the heart of the story is the marriage between Lana and her husband.  We are given fragments of their story; it’s filled with moments of sadness and joy, but it is enough to have us rooting for Lana to somehow manage the impossible.  Lana is a beautifully crafted and flawed character; she’s an ex-soldier turned biologist and soldier’s wife. The range of emotion we get to see Portman perform is a reminder to how talented she really is.

The film is like a tropical hybrid of Aliens and The Thing, and there is a moment in this film where the team is in peril with one of the creatures in The Shimmer that simply ranks as one of my favorite horror moments in the past decade. But as easily as I can go on about how I loved this film, I can understand why people will hate this film.

Annihilation is a breath of fresh air to the sci-fi genre. When it comes to its end and going into the final credits, there are going to be those who just don’t like it, but that’s OK. This is a film that does leave you questioning things, whether it’s simply an opinion about the ending or deeper whether about evolution or possibly otherworldly life. If you’re worried I may have spoiled things, believe me, I barely scratched the surface of this film. I plan on re-watching the film soon to see what things I missed and to enjoy the trip to this otherworld.

It’s a bit obvious Paramount doesn’t have much faith in this film considering its release is buried in the week following Black Panther, which will rule the box office for a few more weeks at least. Soon Annihilation will be seeing a wide release on Netflix globally, and hopefully it will find its much-deserved audience there.  In my opinion this should be seen on the largest screen you can find it on with the best sound system you can find, because it is sensory overload bliss.

Brent Lorentson is a horror writer and film critic based out of Tampa, Florida. With a BA in Digital Film, he co-wrote and co-directed Scavenger Hunt. His short stories have appeared in various horror anthologies. In 2019 his short script Fertile Blood will be a part of the anthology horror film Slumber Party. He is currently working on his first novel A Dark and Secret Place set to be released in late 2019. Favorite Films: Taxi Driver, Fight Club, I Saw the Devil, The Wild Bunch, Dawn of the Dead, A Clockwork Orange, Pulp Fiction, Heathers, The Monster Squad, and High Fidelity.
Walking Out (Blu-ray) Game Night