Posted in: Disc Reviews by Brent Lorentson on February 24th, 2018 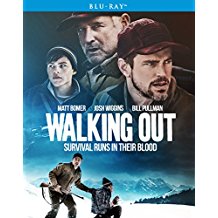 With the success of The Revenant, it shouldn’t be a surprise that other survival films would follow in its wake.  At first glance when I came across Walking Out, I didn’t expect much and figured it would be nothing more than a halfhearted attempt to capitalize on the success of The Revenant.  I couldn’t have been more wrong. What Walking Out brings to the table is a heartfelt tale of survival for a father and son, yet instead of focusing on the bleak conditions in the mountains of Montana, the focus is rather on the bond the two are attempting to develop. With a beautiful landscape as the backdrop of the film, it’s easy to see how Cal (Matt Bomer) could fall in love with his home and want to share it with his son. David (Josh Wiggins) lives in Texas and is only able to make the trip out to see his father once a year, and it’s when David is fourteen that Cal has a special hunting trip planned out. From the start it’s obvious the two don’t share much of a bond, though Cal is trying the best he can to show his son that there is more to life than his cell phone. Cal has fond memories of going out hunting with his father (Bill Pullman), and we see many of these memories in flashbacks.

The relationship between Cal and David is touching, and for some I can see where this film can possibly hit close to home as we begin to see that Cal’s fear and frustration is that his son really doesn’t know him. And just as we are seeing a bond growing between the two, this is when disaster strikes, and David is put into the position of having to save himself and his father. As an audience member we go from not thinking much of this teenager to rooting for him to manage to pull off the impossible and get the two to safety.

Had this film come out in the 90’s I could see Robert Redford doing this, but it’s directors Alex and Andrew Smith who bring this film to life.  I’m not very familiar with their work, but following this film I’m curious to see what these guys will do next.

The film was adapted from a short story, and the film works by using a very simple story structure and keeping this about the father and son. This is nearly as intimate as it gets for a father and son film without feeling as though you are watching a Hallmark movie of the week. Even the scenes where we see the hunting of animals, it’s not done in a manner that is exploitive, but attempts to show us the difference between what is hunting and what is killing along with the relationship man has with the wild.  Perhaps the film tries to make profound statements when discussing the man versus nature in regards to the hunt and building stories to near mythic proportions; after all, we are blindly accepting the notion a boy will carry his father on his shoulders through the treacherous wild.

By the time the credits ended I felt a little robbed, not of my time, but instead I felt like I wanted more of this story.  And that is the lesson I feel I pulled from this film, that we don’t know how much time we have left, and that we never really have enough time to tell all the stories we want, to finish the projects we have planned, or to say a proper goodbye. We see this with Cal’s character as he reflects on his times with his father, and it’s these moments that stayed with me long after the film.

Walking Out is presented in the aspect ratio 2.40:1.  The 1080p image is arrived at with an AVC MPEG-4 codec at an average of 32 mbps.  This is a good-looking film, from the beautiful landscapes in the harsh winter to the tight shots where there is plenty of detail captured. The whites are not blown out, so the snow and ice is nicely captured, and the few scenes shot at night still manage to capture detail while giving us depth.

The DTS-HD Master Audio 5.1 track is good, but nothing remarkable; it’s the silence of the wild that is kind of crucial to the plot that allows the audience to feel the isolation the characters are experiencing.  In the few scenes where we hear nature, whether it is a rolling creek or the growl of an approaching bear, it makes its impact.

Behind The Scenes Footage: (2:51) A brief collection of interview clips that works more as a promo video to get people to visit Montana rather than offer any behind-the-scenes footage.

Deleted Scenes: There is a collection of deleted scenes here, nothing that alters the plot but simple padding to the story. You can understand why it was cut.

This is a beautiful film that I’m surprised has stuck with me as much as it has.  It’s not exactly the fun movie to sit down and watch during a date night, but this is still a film I can’t recommend enough.  This came out under the radar for many, but hopefully this will find an audience for those that loved Legends of the Fall and A River Runs Through It.

Brent Lorentson is a horror writer and film critic based out of Tampa, Florida. With a BA in Digital Film, he co-wrote and co-directed Scavenger Hunt. His short stories have appeared in various horror anthologies. In 2019 his short script Fertile Blood will be a part of the anthology horror film Slumber Party. He is currently working on his first novel A Dark and Secret Place set to be released in late 2019. Favorite Films: Taxi Driver, Fight Club, I Saw the Devil, The Wild Bunch, Dawn of the Dead, A Clockwork Orange, Pulp Fiction, Heathers, The Monster Squad, and High Fidelity.
Daddy’s Home 2 (UHD Blu-ray) (4K) Annihilation