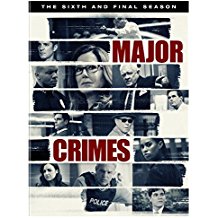 After six seasons I don’t really think of Major Crimes as a spinoff from The Closer. It has gone on to establish itself as a much better show than its former version ever was. We have become very comfortable with most of these characters, and the series isn’t really looking over its shoulder anymore, if it ever did. This is one of those shows that’s just easy to watch. There might not be anything groundbreaking going on here, but it feels like that old worn shirt that you love to wear because it just feels good having it on. That’s the kind of thing that can go on for many years, and it did. But Major Crimes is shutting its doors with this sixth and final season now available on DVD from Warner Brothers.

Pretty much the rest of The Closer’s cast remained intact for its six years. The senior officer on the team is Lt. Provenza (Bailey), and he’s become the field commander of the team over the years. There’s Lt. Andy Flynn (Denison) finally getting married to Commander Sharon Raydor, who originally came from Internal Affairs and was not instantly beloved. But Mary McDonnell gave the role some life, and she became a bit of the show’s emotional center. Lt. Tao (Chan) is still one of the tech experts, along with Buzz (Keene), who also serves as the videographer of the unit. Buzz gets a promotion to reserve officer, but he’s still pretty much the guy with the camera. Detective Sanchez (Cruz) is back after suffering a death in the family. He still loses his cool a little, but I found him an awkward character this season. The delivery has changed to an almost deliberate tight, calm cadence. He’s obviously struggling to keep his temper under control. Dr. Morales (Del Arco) has a bit of a testy relationship with the police unit this season. It’s nice to see some strain here. The unit also includes Kearran Giovanni as Detective Amy Sykes. Last season the show added the rather dry Detective Wes Nolan, played by Daniel di Tomasso. He fits in rather quickly as far as chemistry goes with the unit. Of course, as an undercover cop he was used to being pretty much on his own, so he’s still learning the whole teamwork thing. This season we see the arrival of a new and interesting character. Detective Camille Page is brought over from Missing Persons because of her expertise in dealing with missing children cases. (More on that later.) She’s played by Jessica Meraz and is a fiery detective not used to being a part of a team. She likes to finish other people’s sentences and was mentored years ago by Provenza. The standout character has to be Lt. Provenza, played by M*A*S*H’s G.W.Bailey. The character is actually a lot like that show’s Rizzo. Just pretend that he finally got out of the Army and got into law enforcement. He’s always complaining and getting into trouble, but he’s smart, and his instincts are often dead-on.

Rusty (Martin) continues to be my least favorite character of the show. He gets a lot to do this season, and the more he does, the less I like him. He’s not really a good guy. He does what he wants and appears oblivious to how those around him feel. He finally gets some closure on the two story threads that have involved him over the years. I won’t be sorry to see the character or the actor go.

The sixth season breaks the show’s usual mold in several ways. First of all, you’re only going to get 13 episodes. That doesn’t mean you’re going to see 13 stories. While there have always been ongoing threads, most of the show’s history has been the standalone episode format. This season we get just three stories, one with five parts and two with four parts.

The first story is called Sanctuary City, and it becomes somewhat of a politically correct opera played out in five parts. Three Latino teens disappear from a field trip conducted by St. Joseph’s School. One of them is undocumented with a family that somehow raised $1 million in cash hidden in their floorboards. And while the episode makes it clear that it is morally wrong to cast any negativity on the “Dreamer”, priests are still fair game and are used for innuendo and outright disdain throughout. The lesson here is that some groups can be insulted, while it is forbidden to insult others. How about we treat everybody with the same respect? The ending of the episode is a bit anti-climactic when you consider how much controversy is created that ultimately never truly serves the story. It appears the filmmakers were more interested in using their final episodes to send messages than give this fine show and cast a worthy finale.

Fortunately, things do improve with the second story, which is called Conspiracy Theory. A young activist attorney is found murdered in her car. The investigation leads to a “beer, burger and breast bar” owner who fires his servers when they turn 30. The dead attorney was handling a class action suit against the former football star. There are some clever twists and turns here that make this the superior of the three stories of the final season.

The final four episodes are called By Any Means and cap off the show’s big running thread, that of serial killer Phillip Stroh played masterfully by Billy Burke. The character has had such an influence on the series that it’s hard to believe that he’s only actually appeared in six episodes during the show’s entire run. Four of those can be found here. He’s back in L.A., and he appears to be closing all of his outstanding books…and that includes Rusty. This serves as the finale that fans were most likely hoping for.

Along the way the series deals with the sickness and death of one of the show’s stars. It’s the one single thread that appears to keep the three big stories together as a whole. While it’s sad to see the show go, I agree that it has likely told the tales it had to tell, and it was time to move on. You get all 13 episodes and a five-minute behind-the-scenes feature along with a blooper reel. All in all I’d say, “It was a very good day.”

Gino Sassani is a member of the Southeastern Film Critic's Association (SEFCA). He is a film and television critic based in Tampa, Florida. He's also the Senior Editor here at Upcomingdiscs. Gino started reviewing films in the early 1990's as a segment of his local television show Focus. He's an award-winning recording artist for Omega Records. Gino is currently working on his 8th album Merchants & Mercenaries. Gino took over Upcomingdiscs Dec 1, 2008. He works out of a home theater he calls The Reel World. Favorite films: The Godfather, The Godfather Part II, The Body Snatcher (Val Lewton film with Karloff and Lugosi, not the pod people film), Unforgiven, Gladiator, The Lion King, Jaws, Son Of Frankenstein, The Good, The Bad And The Ugly, and Monsters, Inc.
When Calls The Heart: The Heart of Homecoming Pacific Rim: Uprising