When Calls The Heart: The Heart of Homecoming 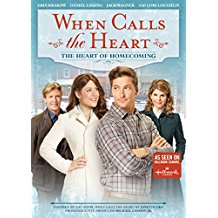 When Calls the Heart is already five seasons in and has been a fan favorite of the Hallmark Channel.  It’s no surprise that the channel would take a chance with the show and develop a movie from the material that author Janette Oke has created. As a show that plays on the Hallmark Channel, it should come as no surprise that it is wholesome and filled with values that you don’t often find on the cable networks.  In this day and age a little bit of wholesome television can be a nice change of pace; after all, for many all they see is the sex and violence that flood the airwaves. It’s hard to find entertainment that is safe for the whole family to watch. But just because it’s something for the whole family to watch, is it any good?

I’ll admit I never heard of the show when I picked up the film to review it.  I’m all for mixing things up and giving all genres a fair shake, though I have to admit I was a bit leery of this title. On the bright side, despite the series already being five seasons in, there is no need to have any prior knowledge of the show to appreciate the film.  The small town of Hope Valley and its residents is well drawn out for first time viewers and understanding the town dynamic is easy to follow as we are introduced to  each of the members of the town.

The centerpiece of the film surrounds the town’s unique Christmas tree, which they have called a wishing tree.  It’s a sweet notion where members of the town scribble their wishes down onto an ornament and hang it on the tree with the expectation that someone will take the ornament and attempt to make the wish come true.  For those who are fans of Hallmark and their values, this is simply the kind of thing that will warm the heart of even a cynical Scrooge. There are kids asking for a crib for their soon-to-be-born brothers, and then there are even wishes from the schoolteacher who hopes for the safe return of her fiancé from his service as a Mounty.

Elizabeth (Erin Krakow) is the love-struck teacher who has been missing her fiancé who has been gone for ten months, and it is no surprise that Jack (Daniel Lissing) manages to return home in time for the holidays.  I expected there to be more buildup to this reunion, but actually we get to see the couple reunite rather early in the film, and it’s from here we see them try to fulfill many of the other townspeople’s wishes. Lori Loughlin plays Abigail, who serves as the town’s mayor while she is married to the town Sheriff Bill Avery (Jack Wagner).  Abigail seems to be uncomfortable with her new position as mayor and has seen to having the town’s former mayor return to Hope Valley to serve community service since he was sent to prison after disgracing the office.  More could have been done with the relationship between Abigail and the former mayor, but I understand there is only so much time that can be spent when there are other numerous characters who take up residence in the town.

The town is as wholesome and as squeaky clean as its plot. There seems to be no room for any kind of serious crime or drama. This is escapist entertainment for those who just want a break from the violence and depravity in the rest of the world.  The town of Hope Valley looks like a set, just like the clothing by the cast looks like a rented costume. Nothing about this film feels real, but perhaps that’s the point.  Where horror has over-the-top monsters and gore, Hallmark is set to deliver a fantasy for its viewers to escape to where happy endings are customary and there can be no unpleasantness than can’t be fixed by fresh cookies and hot cocoa. In today’s world, who wouldn’t want the fantasy of Hope Valley to be a reality?

Brent Lorentson is a horror writer and film critic based out of Tampa, Florida. With a BA in Digital Film, he co-wrote and co-directed Scavenger Hunt. His short stories have appeared in various horror anthologies. In 2019 his short script Fertile Blood will be a part of the anthology horror film Slumber Party. He is currently working on his first novel A Dark and Secret Place set to be released in late 2019. Favorite Films: Taxi Driver, Fight Club, I Saw the Devil, The Wild Bunch, Dawn of the Dead, A Clockwork Orange, Pulp Fiction, Heathers, The Monster Squad, and High Fidelity.
The Handmaid’s Tale: Season One (Blu-ray) Major Crimes: The Complete Sixth Season