In Search of Fellini 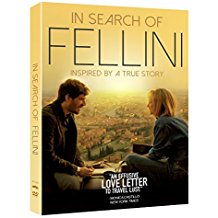 Cinema is a beautiful thing, and it is really special when a film can remind you of its beauty. So often are we blinded by genre conventions: we want to see the gore of horror, feel the laughter of comedy, or the tears of drama. Yes, the films we watch are all indeed beautiful in their own right, but not every film captures the pure essence of cinema. In Search of Fellini delivers that essence on all fronts, whether it be through cinematography, on-location shooting in Italy, stylistic editing, or the fantastic acting. Naming your film after a man who’s widely considered to be a master of his craft sets the bar of expectations very high by default, and this film cleared the hurdle with no problems.

In Search of Fellini is a coming-of-age story about a sheltered girl named Lucy (Ksenia Solo), as she travels to Italy in search of her newfound favorite director, Frederico Fellini. Lucy’s mother, Claire (Maria Bello), has constructed a fantasy world for her daughter, shielding her from realities such as death, working, and sex. Once Claire receives grim news, she hides it from her daughter, but Lucy is blessed with the intuition to understand something is wrong. She begins to try to find work, but what she finds instead is a film festival that is dedicated to Frederico Fellini, and she falls in love with his work. It is from here that she sets off to Italy. This story is loosely based on a similar adventure had by co-writer Nancy Cartwright (the voice of Bart Simpson), when she traveled to Italy in her early 20’s.

The narrative in this film is excellent, and it really doesn’t feel dialog-heavy. A lot of great moments of “showing and not telling” propel you into adventure with Lucy. Solo’s portrayal of a very naïve girl travelling to a foreign country is believable, sure, but there is just something about the way in which she is filmed that is captivating. While Ksenia Solo may be a beautiful woman, I feel as if director Taron Lexton took care not to objectify her in the same vein as the male gaze. Yes, sex was a very big part of the film, but that’s mostly because Fellini’s films were rather erotic at times. There are just so many shots of Solo looking not just towards, but beyond the camera in childlike wonder. Often times directors will use this type of shot as a “mirror image” of the audience (cinematic audiences stare up at the screen in amazement), and in this film it is most certainly the case. However, the connection I felt to Lucy’s cinephilic tendencies really moved me in a way I haven’t been moved before.

If you are a big fan of Fellini, it is hard to say that you would like this film. It really comes down to preference. I am very familiar with Fellini, and I recognized and appreciated many of the homages to his films, but that may not be the case for a die-hard Fellini fan. The way they are placed in the film is rather creative too: because Lucy has been so sheltered and her mother has created this fantasy world for her to live in, she begins to blend Fellini’s films into her real life. For the film, they become transitional hallucinations, and they are absolutely brilliant, because that’s exactly what Fellini does in 8 ½.

Overall, this film is excellent for any lover of cinema. The film is mostly subtle with homages, and it really looks to tell its own story first. Cartwright claims that roughly seventy percent of the narrative truly did happen to her, but the creative freedom she takes to construct a less autobiographical narrative is impressive. I can’t call it a favorite, but it is definitely one I will happily revisit.