Posted in: Disc Reviews by Brent Lorentson on April 10th, 2018 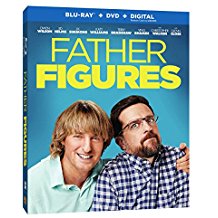 When you are about to sit down for a comedy with Ed Helms and Owen Wilson, you pretty much know what you’re getting yourself into.  Sometimes you just want to watch a movie for a few good laughs; then when it’s over, you return to your day-to-day routine.  When it comes to Father Figures, the problem is that the film from the get-go is trying to get you to believe that Helms and Wilson could possibly be fraternal twins. Yeah, we’ve seen this before with the film Twins, only this time around  we have a film about brothers attempting to overcome their differences as they work together to find their real father.  When you have Glenn Close, Christopher Walken, and J.K. Simmons filling out your cast, the potential for a solid drama with great performances could be expected.  Unfortunately, it seems everyone here for the most part showed up to the set to phone it in, and the film suffers for it.

Things get started when Peter (Helms) and Kyle (Wilson) meet up at their mother’s wedding.  Peter is a successful yet lonely proctologist, while Kyle is the life of the party, making money off of residuals for having his likeness on a bottle.  It doesn’t take much to get the joke that despite being twins, these guys couldn’t be any more different.  As an odd twist of fate would have it, while watching an episode of Law & Order Special Victims Unit, Peter sees a character in the show that looks a lot like his dad.  When he confronts his mother (Glenn Close) about this, she reluctantly confesses that she had lied, and that their real father is none other than Terry Bradshaw.  This in turn has the brothers setting off on a trip together to confront and meet their dad for the first time.  Since this is a movie, things obviously don’t go as planned.

Once they discover Bradshaw is not their father, Peter and Kyle once again hit the road to pursue the next possibility, and this continues till the film comes to an end.  Things progressively manage to get so outrageous that the film quickly loses any believability factor it had going for it, all at the expense of some raunchy jokes.  This is frustrating, because there are several moments where the film attempts to have a little heart, but it all is cheapened at the cost of a lame joke.  Seriously, one of the film’s strongest moments gets the rug pulled out from under it at the expense of an incest joke. I’m all for a raunchy comedy and a solid bromance. After all, Superbad is one of my favorite raunchy comedies, but Father Figures just simply lacks the consistency to be a solid comedy, dramedy, or whatever it was attempting to be.

What is most frustrating with this film is the big moment when the brothers finally find out the truth about their father.  I won’t reveal any details, but it’s something that really doesn’t make any sense and had me questioning a certain character’s motives for this reveal.  Really, I look at this cast and wonder if when everyone first came to the project if it was intended to go a more serious direction, and if that were the case I feel it could have been a better film.

While Wilson and Helms do their best to pull in some laughs, it’s simply not enough to keep this film interesting or stand out from the numerous other raunchy comedies that have come out in the past decade.  All the more disappointing is when going through the deleted scenes, I feel there were scenes left out that could only have improved the film, especially if some jokes were removed (giant cat testicle scene, I’m pointing at you).  In a time where Hollywood is eager to reboot just about any property, this is a film I wish could simply get a do-over, and this time aim for a more serious direction. I may not hate this film; heck, I’d even say it was entertaining, but when it gets to the film’s “twist”, it just left me disappointed upon looking back at the film.

Father Figures is presented in the aspect ratio 2.40:1.  The 1080p image is arrived at with an AVC MPEG-4 codec at an average of 32 mbps.  The image is bright and colorful throughout the film.  Colors and textures really come through nicely in this film, and we get plenty of detail in the image.  Do we really need to see the aging lines on Owen Wilson or be able to count the hairs in the beard Ed Helms is sporting in the film?  Of course not, but we do get plenty of clarity.  The overall production, like most comedies, consists of having the sets and characters over-lit simply because atmosphere isn’t really what a director is looking for in this kind of comedy.  There are no digital artifacts or compression issues in the film; we get a nice, pretty image from start to finish.

The DTS HD-Master Audio 5.1 track is very simple but functional considering this is a film that plays for laughs rather than cool sound design.  The dialog mostly comes through the front speakers, clean and sharp, so we can hear all the dialog and punchlines.  There is a moment involving a train where we get some use from having the surround sound experience.

Deleted Scenes: (21:09) There are ten deleted scenes that have been cut together. Mostly it is filler and was cut from the film due to time constraints.  There are a few scenes here that I wish remained in the final cut, the first being one where we see the brothers as kids and their mom tells them the story about their dad.  Another favorite involves a bar mitzvah, a storyline that was taken from the film all together.  For those who had fun with the movie, these are scenes definitely worth checking out, because it does add more to the film in a positive way.

Gag Reel: (4:26) Here we get two clips with the cast basically goofing around during takes.

The package also comes with the film on DVD as well.

While I’m not the film’s biggest fan, there are definitely worse comedies that are out there.  Sure, with the cast involved with the film I expected so much more, but again, it could be worse.  If you’re just looking for a silly comedy to have on while doing work around the house or having a stress-free date night, this is a film worth maybe checking out on Netflix, but don’t go too far out of your way for this one.

Brent Lorentson is a horror writer and film critic based out of Tampa, Florida. With a BA in Digital Film, he co-wrote and co-directed Scavenger Hunt. His short stories have appeared in various horror anthologies. In 2019 his short script Fertile Blood will be a part of the anthology horror film Slumber Party. He is currently working on his first novel A Dark and Secret Place set to be released in late 2019. Favorite Films: Taxi Driver, Fight Club, I Saw the Devil, The Wild Bunch, Dawn of the Dead, A Clockwork Orange, Pulp Fiction, Heathers, The Monster Squad, and High Fidelity.
In Search of Fellini Tuesday Round Up: April 10, 2018