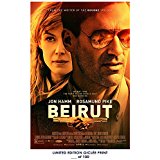 Brad Anderson is a television actor who has puttered around that industry going back to David Simon’s Homicide: Life On The Streets and The Wire. This is pretty much his first feature film opportunity in the director’s chair, and Beirut certainly shows that he has a lot of talent… as a television director. No question the chops are there, but the framing and pacing of Beirut suffers from a kind of small thinking that fails to keep one’s attention for very long. He hasn’t learned how to take advantage of large set pieces and exotic locations to expand the experience for his audience. Some will believe I’m talking about action or the kind of cheap thrills that sell tickets, but that’s not exactly my point. There’s enough action here, and the thoughtful script by writer Tony Gilroy is actually clever and engaging. It’s even a little old-school, and I like that kind of thing. But Brad Anderson just doesn’t know exactly what to do with it, and it suffers at his inexperienced hands.

It’s 1972 Mason Skiles (Hamm) is a skilled diplomat stationed in Beirut where he must juggle the concerns of the warring PLO and Israel along with his obligations to America and the restless population. It’s a job he does well, and he’s managed to balance the necessary agendas with some success. He’s celebrating with a party at his home when gunmen crash the party and kill his wife. They also kidnap a local boy whom he was trying to help, who ends up being the sibling to the terrorist who orchestrated the attack. The loss sends Skiles into a downward spiral of alcohol and depression.

Ten years later he’s still struggling and working as a labor negotiator far from the pressures of international diplomacy. But you know the old Hollywood standby, yeah? Just when you think you’re out, they find a way to pull you back in. Something has happened back in Beirut. An old colleague Cal Riley (Pellegrino) has now been kidnapped by a terrorist offshoot. The only person they will negotiate with is Skiles. So he has to be convinced to return to the place where everything in his life went so horribly wrong a decade earlier. There he meets the team of Sandy Crowder (Pike), Donald Gaines, played by Dean Norris with a full head of hair, and Gary Ruzak (Whigham). Two things are clear from the start. They know more than they’re telling him, and they’re not exactly glad that he’s there. It’s obvious that his presence was engineered, and the film plays out a rather slow thread of clues that lead to the big reveal.

There are a lot of things to like about Beirut. I found the political thriller atmosphere in the story to be quite compelling. There’s a pretty solid cast that includes Dean Norris, Shea Whigham, and Rosamund Pike. Jon Hamm is even better as the character in need of redemption here. And make no mistake about it, this is a story of redemption all of the way through. The Morocco locations that substitute for Beirut are convincing when Anderson lets us take enough of a look at the environment. Instead he relies too heavily on camera work that pushes on characters and makes you feel a bit claustrophobic in such a big world. Anderson has all of the tools at his disposal to make a captivating little thriller, but it’s too much for him to handle, and the result is more of a convoluted mess that ultimately makes it difficult to care much about.

I get that this was not necessarily an easy story to tell. I also get that we’re talking about a director who has spent a pretty solid career in television. He likely has forgotten more about directing than I’ll ever know. I freely acknowledge all of the above. But he failed to entertain me here, and I liked enough of the film’s elements to be an easy mark. The film runs about 110 minutes, but it feels like “He’s given us 6 hours.”

Gino Sassani is a member of the Southeastern Film Critic's Association (SEFCA). He is a film and television critic based in Tampa, Florida. He's also the Senior Editor here at Upcomingdiscs. Gino started reviewing films in the early 1990's as a segment of his local television show Focus. He's an award-winning recording artist for Omega Records. Gino is currently working on his 8th album Merchants & Mercenaries. Gino took over Upcomingdiscs Dec 1, 2008. He works out of a home theater he calls The Reel World. Favorite films: The Godfather, The Godfather Part II, The Body Snatcher (Val Lewton film with Karloff and Lugosi, not the pod people film), Unforgiven, Gladiator, The Lion King, Jaws, Son Of Frankenstein, The Good, The Bad And The Ugly, and Monsters, Inc.
Chappaquiddick Isle of Dogs