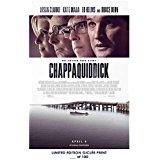 Bold and incredibly compelling, the movie Chappaquiddick is a “tell all” with a lot of authority.  Much like last year’s The Post, it tells its story pulling no punches, playing out the characters and holding nothing back.  Although I’m familiar with the incident, many of the facts were clouded, squashed, or lost due to current events at the time.  If you liked The Post, then here’s a film that will enlighten you and make you cringe. In 1969 about one year after the assassination of Robert F. Kennedy while he was touring for votes to be nominated for President, his brother Ted Kennedy (Jason Clarke) was already thinking about his chance at the highest position in America. On the fateful night of July 18, however, things ran amok, taking him out of any chance for the Presidency.

Excited about the day’s events and conversing about most anything related to the fun they were having, the hosts had booze available to everyone. Ted sat down next to Mary Jo, and before you knew it, he asked her if she wanted to go for a drive. It was a close-by trip that would lead to the death of Kopechne and a pact that was hidden for years.

Director John Curran reveals the night and aftermath of the incident that would alter the life of the last male Kennedy.  His screenwriters Taylor Allen and Andrew Logan dug out the facts, added a little “Hollywood”, and crafted a true story that will raise the hair on the back of your neck. As if you were there, each step from the moment Ted drives off the Chappaquiddick Bridge to the cemetery of Mary Jo Kopechne’s burial is played out.  There’s no doubt left on the cutting room floor as we see a man go from respected to despicable.

The most alarming scenes show the backroom politics, lies and devious plans made by some of the most important people in government circles. During one in particular; the morning after the accident Ted gets pulled into an unexpected meeting with David Burke (Vince Tycer) chief of staff to Ted Kennedy, Walter Steele (Tom Kee), special prosecutor for Martha’s Vineyard and former Assistant District Attorney for Boston, Mass. His private practice was criminal law. Then there was Ray Larosa (Damien DiPaola), a civil defense official, Stephen Edward Smith (Victor Warren), brother-in-law to John F. Kennedy and his financial analyst and political strategist. He was also Robert F. Kennedy’s campaign manager. In addition present were Ted Sorensen (Taylor Nichols), special counsel to President John F. Kennedy and advisor to Robert F. Kennedy, and Burke Marshall (Barry Press), the Kennedy family lawyer. The most noted in the group was Robert McNamara (Clancy Brown), Secretary of Defense under President John F. Kennedy and Lyndon B. Johnson.  He played a major role in escalating the United States involvement in the Vietnam War (see the movie The Post that was released in 2017). The group lays out Ted’s “game plan”. It’s the film’s summation of all that’s bad about deep state government, controlling family influence and falsehoods.

The film touches home with me, as I was fooled by the press at the time. In addition Ted was only given a light sentence, indicating he did no wrong.  It was just an accident, after all, on a narrow bridge in the middle of the night. No one was drunk, he was disoriented, he got out of the car and went back to try to get her out, he tried to swim across the pond to get help…all lies.

The acting is terrific by Jason Clarke as Ted Kennedy, showing him going from sterling to a man possessed with the Kennedy curse.  Clarke nails the character and makes the film work. His best scene comes just before the Ted Kennedy’s nationwide TV statement as he once again disappoints his best friend and cousin Joe Gargan, played by Ed Helms.

In support there are many, but the standout goes to Ed Helms as Gargan, who begs Ted to report the event and suffer the consequences.  It’s Gargan who’s the one with the level head throughout the film, although you can see others wanting to move over to his way of thinking.  Helms brings out Ted’s character, and we see the Kennedy influence dominating the senator.

As for Kate Mara, I have yet to see a bad performance from her, and even though she’s not in the film that long, this one will stick with you for some time.  Here she shows Mary Jo’s sadness for the loss of her boss, Robert Kennedy.  Trying to get her life on track, she succumbs to another Kennedy, but this time it’s a commitment that ends quickly and deadly.

While the reports were that no one at the party had alcohol available to them, the movie shows differently.  The party participants were reluctant to talk about it, according to a Newsweek report, and left the island before they could be questioned. In fact it was hard to get anyone involved to talk about the accident.  Many rumors were flying around, but I guess we had to wait until now when most of those involved have died.  What’s next, the real evidence about the assassinations of John F. Kennedy and Robert F. Kennedy? Most everyone during those dastardly events are no longer around either.

If you like this film and haven’t seen The Post, I suggest you do. Another very good expose on the history of America.

John Delia has been on all sides of the movie business from publicity, writing for publications and on line blogs, script writing, to film making. Writer, critic, film editor he has worked as a film critic on this second go around for 14 years. He earned his Bachelor’s degree at the college of Journalism and Communications at the University of Florida in Gainesville, Florida. John is an active member of the Southeastern Film Critics Association (SEFCA) . Favorite Films: Lord of the Rings/Hobbit trilogies, The Godfather trilogy, the Indiana Jones trilogy (I didn't like the 4th), The Avengers and for TV it's Game of Thrones. As for animation it's a tie between anything Pixar and everything Hayao Miyazaki.
Suicide Squad: Hell To Pay (UHD Blu-ray) (4K) Beirut