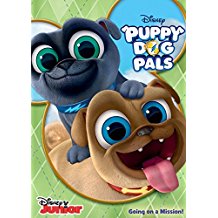 You know what the greatest thing about kids is? Their imaginations. That is something that tends to diminish as we get older. If you are lucky, some vestiges remain as an adult, but nothing in comparison to when you were a kid, right? I mean, when you are a kid, your imagination allows to be believe that anything is possible. For example, the idea that two puppies can not only fly to Hawaii in back in the span of time that it takes their owner to make it home from work, but they can do it without being in a doggie carrier. That was my struggle while watching Puppy Dog Pals; I kept bring reality into it. However, my daughter Nalyce does not have that problem. So no matter how crazy these two puppies’ antics got, she loved every minute of it. And you know what? The sound of her laughter and seeing her so engaged with something positive made me love it too.

Puppy Dog Pals follows two dogs, pugs if I had to guess, as they engage in adventures that take them all over the world. I feel obligated to mention again that these two managed to travel to and from areas such as Hawaii, France, and China in the span of time it takes their owner, Bob, to make it home from work. Once you get the impossibility of those actions, everything else become feasible, and you can enjoy the show. This is obviously a kids’ show, and I am far from the target audience, but even still I was able to enjoy myself. In my opinion, Bingo tends to be the more levelheaded of the two, thus making him my favorite character. My daughter is of a differing opinion, as Rollie tends to take things more literally, such as when Bingo attempts to explain what a floral lei is, and Rollie proceeds to “lay”down. Rounding out the cast are the puppies’ big sister cat, Hissy, and A.R.F, an artificial intelligence dog created by Bob to clean up after and entertain the puppies. (Remember that part I mentioned about overcoming the impossibilities? I bet you thought it was going to be easier.)

The most important aspect for me was the lessons that are incorporated into early episodes, themes as the importance of cleaning up one’s own messes or respecting other people’s belongings. These themes are a big part of what makes the show relatable as well as educational. As a practice, I would quiz my daughter after every episode to ensure that she caught the moral, and I am proud to say that more often than not she did. The one about cleaning up her mess is obviously going to be an ongoing struggle, but hey, she’s six, we’ve got time.

It goes without saying that Puppy Dog Pals has my daughter’s stamp of approval, and given that, it not only entertained my child but taught her valuable lessons that she was more than likely to forget within the next week, it has mine as well. Not to worry, I will be keeping the disc on hand, for refresher courses. I do recommend this series for the younger generation, entertaining and educational material is in short supply, so when we find something that works, we definitely need to hold on to it.

Jeremy Butler is a film school graduate of the International Academy of Design and Technology. He is been writing for Upcomingdiscs since 2012; however, movies have played a big part of his life for much longer. Favorite genres include horror, science fiction/fantasy, and comedy. Favorite movies are V for Vendetta, Boondocks Saints, Kiss Kiss Bang Bang, and The Godfather.
Tad the Lost Explorer and the Secret of King Midas Cheech and Chong’s Up in Smoke: 40th Anniversary