Cheech and Chong’s Up in Smoke: 40th Anniversary 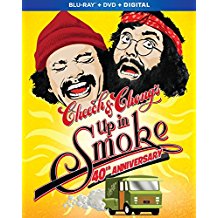 “Wonder what he’s been smoking.”

When it comes to Cheech and Chong, you hardly have to wonder. What better way to celebrate 420 today than by revisiting Cheech and Chong’s Up in Smoke, the OG stoner comedy? The film is celebrating its 40th anniversary this year, which Paramount has commemorated with this new edition. But how well does this high-larious comedy classic hold up in 2018?

Cheech Marin and Tommy Chong star as chronic (tee-hee) underachievers Pedro de Pacas and Anthony “Man” Stoner. Pedro (Cheech) is a working-class goofball, while Man (Chong) is a disappointment to his rich parents, who demand he find a job by the end of the day. Instead, Man wrecks his beat-up Volkswagen and decides to hitchhike, which is when he meets Pedro. The pair become fast friends after Man whips out a comically enormous joint. Pedro and Man are having such a good time that they barely realize they’ve been tossed in jail and released on a technicality.

The duo proceed to spend the rest of Up in Smoke stumbling into various misadventures while trying to get their hands on some weed. Their quest eventually takes them to Tijuana, where they wind up accidentally driving a van that is made entirely of marijuana back into the U.S. (Don’t ask.) That puts them on the radar of the overzealous Sgt. Stedenko (Stacy Keach) and his woefully inept narcotics unit. As a result, Pedro and Man have to avoid the police while making their way to a Battle of the Bands competition.

By the time Up in Smoke came out in 1978, Cheech and Chong had been a successful counterculture duo for the better part of a decade. The movie is essentially a reworked version of their comedy routine, and the pair found a strong collaborator in director/producer Lou Adler in terms of translating their shtick to the screen.

The best parts of Up in Smoke are the scenes — like their first car ride together — that leave you wondering precisely how stoned Cheech and Chong were during filming. (The pair swear they were totally sober when the cameras were rolling.) There are also some truly inspired bits, like the memorable appearance of Ajax Lady (who think she’s snorting something else) and the ferocious “Earache My Eye” musical performance.

Obviously, some of the jokes don’t play quite as well in 2018, such as Pedro exclaiming, “Light it up…let’s get Chinese eyes.” Also, Up in Smoke‘s idea of a “well-rounded” female character has more to do with her bust then her seeming like a real, live person. But even when bits run a little long — Up in Smoke clocks in at only 85 minutes, but it still feels like it’s straining for material — the movie’s good-natured stars keep your attention.

Yes, Up in Smoke is about two guys who like to get high, but it’s also very much about standing up against (and working) the system. (Pedro and Man use immigration officers to hitch a free ride to a wedding in Tijuana.) That feisty spirit is the thing about Up in Smoke that has aged the best.

Cheech & Chong’s Up in Smoke: 40th Anniversary is presented in an aspect ratio of 2.35:1. The 1080p image is arrived at with an AVC MPEG-4 codec at an average of 36 mbps. This is a remarkably clean and vibrant presentation for a 40-year old film. Of course, it helps that Up in Smoke is uncommonly sunny (bouncing between Los Angeles and Tijuana) and vibrant (the upholstery in Pedro’s car) than your average comedy. Close-ups, in particular, hold up well, displaying some strong fine detail without sacrificing the image’s grit. (There is some subtle filmic grain throughout.) There are several instances where the picture appears to be blurry around the edges — most notably, the first time Officer Gloria pops up and you can barely read her name plate — but I suspect that has more to do with the source material than this transfer.

The DTS-HD Master Audio 5.1 track has a bit more work to do here than it would for the average comedy, since Cheech & Chong heavily incorporate music into their shtick. To that end, the movie’s songs feel a little heftier thanks to support from the entire sound field. (The most explosive example is the climactic “Earache My Eye” performance.) Speaking of explosions, the subs briefly pop during the bit where Cousin Strawberry experiences a Vietnam flashback. Otherwise, this is a well-balanced, dialogue-driven track.

All of the bonus material is presented in standard definition, except for the “How Pedro Met the Man” featurette.

Commentary by Cheech Marin and director Lou Adler: You can tell from the fact that Cheech and Adler don’t even bother introducing themselves that you’re in for a rollicking commentary. But in addition to funny stories from this shoestring production, they have great affection for each other and for the colorful characters who worked on this movie. (When Louisa Moritz pops up on screen as Officer Gloria, they casually mention that she’s actually “a real actress.”)

How Pedro Met the Man: (15:15) This featurettes features new interviews with Cheech and Chong (who field them together) along with director Lou Adler. Cheech and Chong talk about the film’s legacy 40 years later — society was more ignorant about marijuana in 1978 —and reminisce about the first time they smoked weed. The trio also discuss the movie’s influence on stoners, Mexican American comics like George Lopez, and more.

Roach Clips: (11:29) There are 8 deleted scenes, and they come with optional commentary from Cheech and director Lou Adler. The standouts include Harry Dean Stanton (who didn’t make the theatrical cut) popping up in a jailhouse sequence and more of Ajax Lady. Features a Play All option.

Lighting It Up — A Look Back at Up in Smoke: (11:11) This retrospective was clearly plucked from a previous home video release. Worth a look if you haven’t seen it before, since it features different anecdotes than “How Pedro Met the Man.”

Forty years after its release, Up in Smoke remains the granddaddy of stoner comedies. (The Harold and Kumar movies, in particular, are direct descendants of this film.) It also remains an amusing, easy watch in its own right.

Yes, the rhythm is slower than we’re used to with comedies these days and a handful of the jokes would never fly today. But Cheech and Chong have great chemistry and you’ll have a much better time if you toke up and “go with it.”