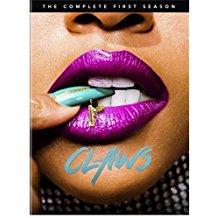 Nails. This right here is an ongoing struggle between me and my wife. As a man, I do not understand the significance of spending money on something that you can do yourself. Not to mention, I can tell you how many times I’ve gotten in trouble for not noticing when she goes to get a manicure and pedicure. In fact, I honestly don’t really know the difference between the two. Needless to say, a television show that revolved around a nail salon was not going to resonate with me. Fortunately, Claws had other things to grab onto, such as the inner workings of a criminal enterprise for which the nail salon is a cover. So I went into the story with reservations that were immediately melted away by the intriguing storyline. Furthermore, I was caught off guard by how many people I recognized; Niecy Nash, Harold Perrineau, Dean Norris, Carrie Preston, and many more.

Claws features Desna Simms (Nash), the proprietor of Nail Artisans, a nail salon in Manatee County, Florida. Desna dreams of building a better salon in a more profitable location. To that end, she allows her business to be used as a money laundering operation for the Husser Family, a criminal syndicate involved in the drug trade, led by Clay Husser, also known as “Uncle Daddy” (Dean Norris).  Events quickly spiral out of control for her when her lover and criminal contact Roller Husser (Jack Kesy) nearly beats her to death and she is saved by Roller’s mistress, Virginia (Karrueche Tran).  I must say, that is a powerful opening and does make for some good drama. For a majority of the opening episode, the two served naturally as antagonists. I mean, of course; what else could you possibly be to the woman who is sleeping with your boyfriend behind your back and attempts to muscle in on your salon business. However, her willingness to rescue Desna sets forth a different dynamic. However, don’t think that this single act made them fast friends, as they spend a great deal of the season butting heads, especially in regards to Desna’s brother Dean, played by Harold Perrineau.

Now, the relationship between Desna and Dean is what serves to humanize the lead character.  This objective is accomplished, especially when you get a better picture of the circumstances they come from and the difficulties that Dean has with his autism. Perrineau portrays his role very well; you can’t help but feel sympathy for his plight. The relationship between Virginia and Dean has dysfunction written all over it and has lasting consequences, but nevertheless they are kind of charming together. These two are not the only ones with a difficult relationship, as Desna’s number two, Jennifer (Jenn Lyon) and her husband Bryce Husser (Kevin Rankin) have trouble finding common ground as he dives further into his family’s business following the death of his brother Roller.

Speaking of Roller’s death, it would seem that Virginia is not quite the shot she thought she was. That’s right, Roller returns in the latter half of the season to complicate matters just as Desna has everything she wants in the palm of her hand. Don’t worry; I wouldn’t count that as a spoiler, as the audience is clued in to his survival relatively early on.

The first half of the season is a bit of a thriller, as Desna and her crew sit on pins and needles worried about Clay discovering their involvement in the death of his nephew. The group is proactive in their deceit, which only serves to bring police involvement as well as cause a rift between Desna and Jennifer. More interesting is the loyalty that Desna inspires in those around her. I mean, it is hard to find one die-hard friend; Desna has at least three, with a potential fourth should she and Virginia managed to come to terms with one another. The second half is a rollercoaster ride with the return of Roller and the potential risk of having all their lies exposed. Additionally, new threats emerge that not only put Desna and her girls in danger, but the Husser family as well.

A pivotal episode for the series is the second to last episode of the season, “Ambrosia,” because it is intercut with flashback scenes that explain all the events that came before the pilot and shows exactly how Desna ended up in the situation that she is in, which adds nicely to her current situation in the episode. After all, choices have consequences.

Fear not, men, you don’t have to run from the room should your significant other ask you to watch Claws with her. For I can attest that it is more than a show about a nail salon. There are elements of comedy, such as the way Desna finds out about Dean and Virginia, and several thrilling moments to keep you entertained intercut with several intricate nail designs. The first season leaves the series wide open for Season 2, which will premiere June 10. So if you find yourself hooked, you only have a month wait until the new season.

Jeremy Butler is a film school graduate of the International Academy of Design and Technology. He is been writing for Upcomingdiscs since 2012; however, movies have played a big part of his life for much longer. Favorite genres include horror, science fiction/fantasy, and comedy. Favorite movies are V for Vendetta, Boondocks Saints, Kiss Kiss Bang Bang, and The Godfather.
Gone Are The Days Super Troopers 2