Gone Are The Days 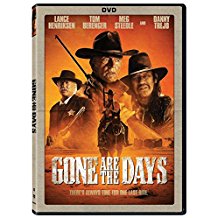 When you watch a Western film, there are a certain number of elements that you subconsciously tick off in you head as the film plays out. There’s the obvious traps of horses, six-guns, cowboy hats, saloons, and lawmen and outlaws. Gone Are the Days does a thorough job of checking each of those boxes as it goes along. But it tries to do some of the other things that make a Western worth watching above the crowded genre. Gone Are The Days fills the screen with some talented actors who deliver wonderfully nuanced characters. It would almost appear that you just couldn’t ask any more from a relatively low-budget Western movie. The key word there is … almost. The movie has all of the elements and strong performances, but somewhere along the way the film spends too much time telling a story it forgot to pack in the saddlebags. The result is an easy-to-watch film that you’ll likely never pull off your video shelf again.

As the film begins we are introduced to elder bank robber Taylon, played by an elder Lance Henriksen. His doctor believes he’s on his deathbed and leaves to get more medicine and a priest. But Taylon climbs out of that bed with nothing but the sheer will to keep going. If he doesn’t, we have a rather short Western movie on our hands. Instead we get what soon feels like an overlong Western on our patience. Taylon begins to attempt the routine activities of a late 19th century life. As a montage this would have been an effective start to the film; however, director Mark Landre Gould wants us to feel the frustration and pain that Taylon feels, and the best way to do that is force us to linger on these sad attempts to do anything from going to the little cowboy’s room to getting water from a well using an old broken pail. Gould should have realized he had an awesome actor in Henriksen, who is actually delivering the goods with his own body language, and he does it more efficiently, and more importantly, he delivers it faster. Fifteen minutes screen time and patent Taylon tries our patience.

Eventually, we meet his old running mate, and the two decide to return to their last big attempt at crime and finish the bank they never did get away with robbing. So after another five minutes of showing us how hard getting ready is for Taylon, we’re finally on the road. Things change when they reach the small town. Taylon has brought every bit of money he’s managed to squirrel away from his life of crime. In addition to the bank job proceeds, he intends to give it to the daughter he never saw grow up. Things make a bit of a turn when he finds out she’s a prostitute working for a cruel pimp. Again the plot slows down as he tries to help Heidi (Steedle) without revealing his relationship. That portion of the film turns from slow to awkward, and you’ll start to question several of the characters’ intelligence before long.

Finally, there’s lawman Will, played by Tom Berenger, who knows who Taylon is and about his daughter. He has history that goes back to that special bank many years ago and the tragic circumstances that resulted for everyone concerned. But again, allegedly smart people can’t add simple numbers, and the story is off to a rather unbelievable set of turns and twists. Some you’ll see coming, and others you will not. One involving his partner ends up being quite a clever turn of events and is nicely handled. If only all of the film were so well crafted. But alas, that was simply not meant to be.

All of Gone Are The Days’ best moments are simple character moments. Henriksen is still a force to be reckoned with and absolutely raises this material above its own quality. The film, likely intentionally, reminds one of Clint Eastwood’s far superior Unforgiven. This is a story of redemption, but not the typical redemption you too often find in these moral plays. It’s a road film, but has little to do with robbing banks or saving wayward daughters. It’s a journey to judgment that’s summed up well in Berenger’s final words.

If you’re looking for great John Ford vistas here, you’re in for a disappointment. The land is rather sterile for a Western. The box art lists the cult favorite Danny Trejo in top billing, but he merely plays a cameo as a mysterious river man who drops one of the biggest hints for one of the twists. I love Trejo and was disappointed he had so little screen time. Meg Steedle is acting in her first feature after spending a few years on television projects. This wasn’t some of her best work. Chalk it up to having to equal the intensity of a pro like Henriksen. She never had a chance, and neither does Gone Are The Days. Trying to stay with it all is a lot of work. “You’ll give yourself agita.“

Gino Sassani is a member of the Southeastern Film Critic's Association (SEFCA). He is a film and television critic based in Tampa, Florida. He's also the Senior Editor here at Upcomingdiscs. Gino started reviewing films in the early 1990's as a segment of his local television show Focus. He's an award-winning recording artist for Omega Records. Gino is currently working on his 8th album Merchants & Mercenaries. Gino took over Upcomingdiscs Dec 1, 2008. He works out of a home theater he calls The Reel World. Favorite films: The Godfather, The Godfather Part II, The Body Snatcher (Val Lewton film with Karloff and Lugosi, not the pod people film), Unforgiven, Gladiator, The Lion King, Jaws, Son Of Frankenstein, The Good, The Bad And The Ugly, and Monsters, Inc.
Cheech and Chong’s Up in Smoke: 40th Anniversary Claws: Season 1