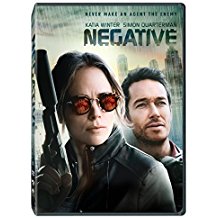 So Negative excellently exemplifies the importance of respecting a person privacy as our main character finds himself inadvertently drawn into a world of spies and drug cartel all thanks to the act of snapping a simple photo. Katia Winter and Simon Quarterman star as this duo thrown together and forced to rely on one another to survive. This thriller takes a minute to build traction, but still manages to entertain. However, winter tends to be very monotone and soft-spoken, so you will need to have to volume up to catch some of her dialogue.

All he did was take her picture. This seemingly innocent act, brings Hollis (Simon Quarterman) more grief then could have ever imagined, as later that night the subject of his intrigue shows up at his apartment. Her name is Natalie (Katia Winter) and she is a former MI-5 operative in the process of going into hiding, and she can’t afford to have photographic evidence of her presence floating around. She merely went to retrieve the proof, she anticipated she would have to be a bit forceful to get it back. However, she did not expect the people hunting her to locate her so quickly.

Now not only does she have to allude the drug cartels hired guns, but she must do it with an unwilling companion. Now traveling the southwest and unsure of who she can trust, Natalie will have to put her trust in a stranger with no formal training. On the other side of the coin, Hollis must hope that Natalie is as good as she thinks she is and do his best to help her, if he hopes to survive.

Despite being unable to hear her at times, I found Natalie to be one of the most interesting characters that I have encountered this year. Though capable of violence and being able to kill at a moment’s notice, she is not without a conscience as she chooses to take on the burden of protecting Hollis when it would have been easier to leave him to his fate. Katia expertly displays all the qualities that I would imagine finding in a spy; she is emotionally detached and able to switch loyalties when necessary. If she had only spoken a little louder, she would have been perfect.

Simon Quarterman’s Hollis is not as interesting, but he is not without his moments. His final scenes were possibly the most authentic of the entire film. Speaking of the film, it was a success and worthy of a wider release in my opinion. I would have loved to see more action as there was a great deal of buildup and the final battle did not fully satisfy my anticipation. More dialogue-driven then action packed, but there is intrigue in those exchanges. In those conversations, we gain understanding of the characters and what brought them to his point in their life.

Winter and Quarterman have decent chemistry, most notably in their first exchange when she first attempts diplomacy to retrieve the picture he took and then resorting to violence when he proves uncooperative. I think a major draw of the film is their interaction coupled with the role reversal, with Winter being the more dominant personality. Though the more subservient one, Quarterman is the more relatable character as he is the audience’s perspective into a world of espionage. In addition, he challenges Winter and humanizes her otherwise detached character. They are both two sides of the coin needed for film’s success.

Audience are likely to enjoy Negative, as long as you are not looking for over the top explosions. I wouldn’t categorize it as a thriller as it did not take me by surprise, but there wasn’t a second during the runtime that I was fully engaged.

Jeremy Butler is a film school graduate of the International Academy of Design and Technology. He is been writing for Upcomingdiscs since 2012; however, movies have played a big part of his life for much longer. Favorite genres include horror, science fiction/fantasy, and comedy. Favorite movies are V for Vendetta, Boondocks Saints, Kiss Kiss Bang Bang, and The Godfather.
Solo: A Star Wars Story Gino Sassani joins Southeastern Film Critics Association