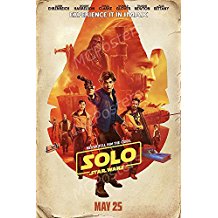 Yes, those lines open this Star Wars story, because the filmmakers want to be sure you know what you’re watching. This is Star Wars. Just in case there was anyone at all in the audience who had no idea they just bought a ticket to Star Wars. If he were dead, George Lucas would be rolling over in his grave. Instead, maybe he’s just having some restless nights with little sleep. It is Star Wars. And that means there will be a droid as a main character, space battles, and some good old fashioned one-reel-serial-days adventure. It’s a heck of a visual amusement park ride, and the film will certainly entertain. But I have to open by saying it is my least favorite of the Disney Star Wars films to date.

Young Han Solo (Ehrenreich) is a bit of a scrapper, scrounging for things to sell to the local warlord, who happens to be a large caterpillar-like Lady Proxima, voiced by NCIS’s Linda Hunt. He’s found something of value but has fallen out of favor with the lady and has to make his escape off-planet, unintentionally leaving his love Qu’ri (Clarke) behind. What he wants is to be a pilot, so he joins a military organization and cuts his teeth on a few battles. He also befriends the beloved wookie Chewbacca. But he doesn’t come into his own until he partners with Beckett, played by the lately-prolific Woody Harrelson. Beckett teaches him how to operate outside the law, and their adventures eventually lead them back to Qu’ri, who has now become the consort of another crime kingpin. She ends up joining Beckett, Chewie, and Solo in a heist to make things right. This is where the double-crosses on double crosses happen to make this more of an Ocean’s 11 in space. Of course, to do the job, they need a fast ship. Enter Lando Calrissian, played by Donald Glover. He happens to have a fast ship, and Han is suddenly in love with…wait for it… the Millennium Falcon.

The film already had several things going against it before it was ever released. The film was basically going to tell a story that we already know pretty much already. The job ends up being the bragged-about Kessel run, and Han ends up picking up the pieces of a life we already know. It’s not so much a problem of knowing the story. It’s the fact that Harrison Ford’s character has given us so much background that we have engraved these things in our head and already have our own versions of how it might have played out. Another problem is the performance of Alden Ehrenreich as the young Han Solo. The guy’s not bad, and there’s some pretty good acting here, but he’s not Hans Solo, and there’s little chance he ever will be. The film opens with a scene straight out of the first rebooted Star Trek film, and I think Ehrenreich felt more like a young Captain Kirk than Han Solo. I’ve heard hundreds of actors were looked at for this part, and it boggles my imagination to think he was the best. By the time Ron Howard came on board, the cast was set. I wonder if Howard would have made the same cast choice. I would have loved to have seen Anthony Ingruber, who played a stunning young Ford character in Age Of Adaline.  The actor who really steals the film is Donald Glover as Lando. Granted, he had an easier task, because Lando didn’t have a lot of screen time outside of Empire Strikes Back. But Glover just eats this stuff up. He upstages the character who has his name in the title of the film. This movie should have been called Lando: A Star Wars Story. That’s the guy I knew less about in the past, and I left the film wishing I had learned more about him than Han.

That’s not all this film had working against it. We all know that the original directors were Phil Lord and Christopher Miller. It appears they got so carried away with the farce of the whole thing that they were fired just a few weeks before they were scheduled to finish the film. In came Ron Howard, and apparently he reshot 90% of what they had already filmed. When the two original directors saw a copy of the finished film, they dropped their appeal for credit as directors. There wasn’t much left of the comedy they were making. This kind of a turnover usually isn’t good for a film, and I won’t say it hurt this film, because I haven’t seen what it was shaped as previously. I also love Ron Howard’s work, for the most part. But this film, while entertaining, always felt so unnecessary.

Honestly, the film is about 40 minutes too long. If this had played as a tighter film, it might have worked a lot better. The script drags out events we already know a bit about. You’re not building to any big surprise here…or are you? OK, there are some rather sweet events in the twists that will bring a huge reaction from the Star Wars fandom. Obviously, I’m not going to spill now. You want to discover these moments on your own. Perhaps even those Dum-Dum-Dum moments would have been even more effective with a tighter film and story. Too many heist pieces and too much filler between the character moments that never really come together here.

Fans will appreciate the many Easter eggs found along the way. The old John Williams hero moments pop up every time the film wants to connect you to the classic Star Wars feeling. You can count on it in times like Han’s first look at the Falcon. And it really was mission accomplished, because I did get those almost weepy feelings at just the right moments. There’s the smart-alec droid. This time it’s L3-37, who thinks Lando is in love with her and calls for her brother and sister droids to rise up from their oppression. The supporting cast is pretty solid. Emilia Clarke gets to wear more clothes here than she gets on Game Of Thrones, and she’s very good even if she rather fails to develop the right kind of chemistry with Ehrenreich. This is no Han and Leia, to be sure. Woody Harrelson is always a joy to watch, but even Harrelson doesn’t deliver like he did in Apes or The Hunger Games. There should have been more intensity here, to be sure. There isn’t a lot of chemistry at all here, and that’s just out of place for a Star Wars film.

Look, it was bound to happen. Disney has had a lot of success with their Marvel world for 10 years. But if you look close enough, a couple of those films are average, at best. The key is to not do a stinker. The same holds true here for the Lucas franchise. Not every film is going to hit it out of the park. Solo’s a ground rule double. But if Disney can stay in a range where this is a low point, there’s going to be a lot of fun to be had in the Star Wars universe. To sum it up: “You look good, little rough around the edges, but good.“

Gino Sassani is a member of the Southeastern Film Critic's Association (SEFCA). He is a film and television critic based in Tampa, Florida. He's also the Senior Editor here at Upcomingdiscs. Gino started reviewing films in the early 1990's as a segment of his local television show Focus. He's an award-winning recording artist for Omega Records. Gino is currently working on his 8th album Merchants & Mercenaries. Gino took over Upcomingdiscs Dec 1, 2008. He works out of a home theater he calls The Reel World. Favorite films: The Godfather, The Godfather Part II, The Body Snatcher (Val Lewton film with Karloff and Lugosi, not the pod people film), Unforgiven, Gladiator, The Lion King, Jaws, Son Of Frankenstein, The Good, The Bad And The Ugly, and Monsters, Inc.
I Kill Giants (Blu-ray) Negative