The Invaders: The Complete Series 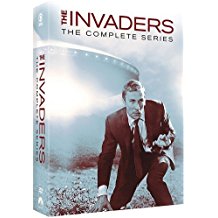 Just because you’re paranoid doesn’t mean they’re not really out to get you. That old axiom has never been more true than for David Vincent in the Martin Quinn series The Invaders. Quinn was best known for his police procedural shows like The FBI. At the time of the The Invaders, Quinn was coming going into the final season of one of his most popular shows, The Fugitive. While most people over the years has compared The Invaders to that Quinn production, they were really not as similar as all of that. In The Fugitive the hero, Richard Kimball played by David Janssen had a very specific mission. He was wrongly convicted of killing his wife and was on the trail of the real killer, whom he had witnessed. The “one-armed man” became an iconic figure in television history and provided Dr. Kimball with his “holy grail”. David Vincent’s mission was far more complicated and seldom so cut and dry. He was honestly more akin to Dr. Bennell, played by sci-fi favorite Kevin McCarthy from Invasion Of The Body Snatchers. In both cases you had one man who knew that aliens were invading and even replacing humans. As I watched this collection of Invaders episodes, I couldn’t help but be reminded of McCarthy’s famous scene running down the street trying to convince the world of the impending invasion.

The Invaders maintained several Quinn trademark touches. The episode was broken down into four acts and an epilog, each labeled as you came out of the commercials. Quinn also used a stable of actors as guests that showed up on almost all of his shows. If you look up most of the guest stars on this set you will find a vast majority of them also made appearances on The FBI, The Fugitive, The Streets Of San Francisco, and Manhunter. He was very much like his contemporary Irwin Allen, who was producing cheesy science fiction shows at the same time. Quinn writers were adept at quick, punchy dialog that was also a common thread in his productions. None of these characters spoke like normal people. There was always a theatrical but often abbreviated cadence to what was being said. Quinn also made heavy use of narration and The Invaders is no exception. Each episode begins with a short narration, often setting up the story and finally moralizing in the end. The music and narration sound very much like Outer Limits episodes.

Unfortunately, The Invaders only lasted for two seasons, and David Vincent never did manage to warn the world. While he was able to defeat the many tasks the Invaders were plotting, all he was able to do was delay the inevitable. There was a revival mini-series in the 90’s that did include Roy Thinnes reprising his role of David Vincent, but he was not the central character. Instead it was Quantum Leap’s Scott Bakula who took on the job of trying to warn the world and stop the Invaders from completing their tasks. The mini-series was intended as a back door pilot for a new show, but whether it be ratings or lack of network interest the new series never materialized, leaving the Invaders and their plots to dissolve in the otherworldly existence of cancellation. There is some talk that the Sci-Fi Channel has considered at potential show, but again nothing has ever really come of those rumors.

Now CBS has packaged both seasons in a deluxe set that includes all 43 episodes on 12 discs. All of the bonus features from the original DVD sets have been retained. Those include the extended edit of the pilot and episode introductions by Ray Thinnes.

There’s no question that The Invaders requires more than the usual suspension of belief. The finger gimmick comes and goes, making it an ineffective way, after all, to identify the aliens. I suspect it grew impossible to keep actors from relaxing their fingers and was a nightmare for the continuity folks. It was also hard to believe that creatures capable of traversing galaxies and of coming up with so many technological breakthroughs would have such a hard time of finally killing Vincent. There were many a chance that they just threw away. I know a few guys in Jersey who would have been a lot more efficient of “splainin’” to Vincent the realities of life. But even with these flaws, The Invaders took a chance and brought a rare attempt at serious science fiction to the still-young medium of television. Is it unbelievable? “It has a flaw, but then don’t we all.”

Gino Sassani is a member of the Southeastern Film Critic's Association (SEFCA). He is a film and television critic based in Tampa, Florida. He's also the Senior Editor here at Upcomingdiscs. Gino started reviewing films in the early 1990's as a segment of his local television show Focus. He's an award-winning recording artist for Omega Records. Gino is currently working on his 8th album Merchants & Mercenaries. Gino took over Upcomingdiscs Dec 1, 2008. He works out of a home theater he calls The Reel World. Favorite films: The Godfather, The Godfather Part II, The Body Snatcher (Val Lewton film with Karloff and Lugosi, not the pod people film), Unforgiven, Gladiator, The Lion King, Jaws, Son Of Frankenstein, The Good, The Bad And The Ugly, and Monsters, Inc.
Jericho: The Complete Series Peter Pan (Multi-screen edition) (Blu-ray)