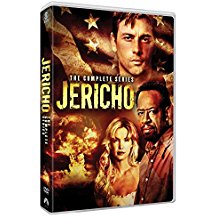 My very first impression was that this show was very ambitious from the gate. Perhaps the show’s fatal flaw is that it attempts to tackle far too many serious issues, complete with complex undertones, with the largest ensemble cast I’ve seen yet. Add this to the fact that the world is still a little sensitive to terrorist attacks, and you have a recipe for keeping your audience relatively small. None of these things are bad elements in and among themselves, and I’m certainly not suggesting that these issues need to be abandoned. I’ve been a high school teacher, and one thing any of us can tell you is that there’s only so much a person can absorb in a given amount of time.

The premise almost sounds simple and unoriginal in the telling. Several terrorist organizations in a coordinated attack manage to nuke at least 22 American cities. Far enough from a Denver blast to survive are the residents of Jericho, Kansas. We’re talking small town with small-town politics and mentality. Jake Green (Ulrich) has been away for some years. He was back visiting when the attack occurred and finds himself taking a lot of the town’s survival on his shoulders. He’d been kind of the renegade son of the town’s long-time mayor. The series begins to resemble the popular Lost from here on out. We’re talking a group of people isolated from the rest of the world under mysterious circumstances. The characters remarkably mirror Lost, down to the pregnant woman and the man with a sinister past who happens to know a lot about surviving a nuclear attack. Also like Lost, the characters’ past is often explored, leading to common threads they might not even know they share. The nation’s surviving towns become almost sovereign states unto themselves. Each develops a unique political structure and raises fighting forces. Before long these other towns begin to engage in disputes and attacks. The problem for me is there are far too many characters and way too complicated situations, so that I was never able to connect with any one character on the series. It’s obvious we are intended to relate to Jake, but I was never able to do that.

The entire show is one long What If scenario. At first brush it looks like a psychological study of how a town might develop under these isolated conditions. There are unmistakable 9/11 and Katrina influences throughout, which the creators willingly acknowledge. The show’s advertising campaign was a little vague for me, and beyond the basic premise, I was never given a good reason to invest my time in a series that would by necessity require my loyalty enough to not miss a show or risk being lost from that point on. Fact is, I was lost even when I had every episode at my immediate disposal.

The return of Jericho for a second season is a story harking back to the 1960’s and a fan base that didn’t have the internet who saved a failing show that had been cancelled after two seasons. That letter-writing campaign revived a failed show that got more than an additional season on television. Today that series has made more money than any television series in history. It spawned five additional series for a total 26 seasons of television and 14 feature films. Of course, I’m talking about Star Trek. So Jericho fans should never lose faith. That group went beyond letters and internet petitions, and quite frankly, don’t you think these network execs have heard it all before? I was part of such a campaign to save a Fox series called Brimstone many years ago. My talks with programmers and execs made it clear they weren’t listening. Jericho fans took hold of a memorable moment from the first season. As the season drew to a close and Jericho was about to engage in a bloody battle with New Bern, there was a call for their surrender. Jericho’s reply parroted that by General McCullough during the Battle of the Bulge. He was surrounded by Nazi troops who demanded his surrender. The General’s one word reply went down in history. It was, simply enough… NUTS! So Jericho fans all over the world picked up the battle cry and inundated CBS with literally tons of peanuts. Never before was a message so loud and clear. Asked to surrender their show, the fans replied with … NUTS! They bought a reprieve and seven additional hours, and managed to donate plenty of peanuts to food banks and even our own solders serving in Iraq. Not bad for a failed television series. Not bad at all.

Unfortunately, everything here feels rushed. The combination of being a mid-season replacement and the dreaded writer’s strike meant a very truncated season for Jericho. Because of this, the show was never able to deliver to the fans everything it wanted. Stories involving New York and Cheyenne were eliminated, and there was less time for the characters to flesh out their parts. Credit a determined cast and crew for making every one of those 20,820 seconds count. Everyone worked hard to get the most out of what they’d been given. I doubt any other show’s workers worked this hard just to please the fans.

Fans are still a little raw over the network treatment of the show. Hopefully having this set of all 29 episodes in one place will help ease the long-lingering pain. Purchase numbers might even send a message to the network that there is still some life in this show. All of the DVD bonus features remain with a new bonus disc that contains some new extras. Jericho did receive a reprieve, but it would not escape its sentence. Again CBS has cancelled the show. There isn’t going to be any last minute call from the governor this time around. The show’s brightest hope lies perhaps in television films or even a feature film. It’s unfortunate in so many ways. We’re likely not going to see the formation of the new nation and how the residents of Jericho play a part in that resurrection. Everyone did a phenomenal job with what they had, but there is no avoiding the unfinished nature of it all. It was a hard-fought battle, and there were some gains made, but ultimately Jericho fans are left with a nation in ruins, and this time there “isn’t going to be a reconciliation”.

Gino Sassani is a member of the Southeastern Film Critic's Association (SEFCA). He is a film and television critic based in Tampa, Florida. He's also the Senior Editor here at Upcomingdiscs. Gino started reviewing films in the early 1990's as a segment of his local television show Focus. He's an award-winning recording artist for Omega Records. Gino is currently working on his 8th album Merchants & Mercenaries. Gino took over Upcomingdiscs Dec 1, 2008. He works out of a home theater he calls The Reel World. Favorite films: The Godfather, The Godfather Part II, The Body Snatcher (Val Lewton film with Karloff and Lugosi, not the pod people film), Unforgiven, Gladiator, The Lion King, Jaws, Son Of Frankenstein, The Good, The Bad And The Ugly, and Monsters, Inc.
Satellite Girl & Milk Cow (Blu-Ray) The Invaders: The Complete Series