Posted in: The Reel World by Brent Lorentson on June 9th, 2018 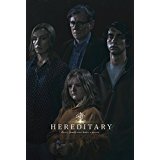 There has been so much hype around Hereditary since its debut at Sundance that by the time I got to watch it, I didn’t believe it was possible to live up to this hype. For months I’ve followed this film, hearing it being compared to The Exorcist and being proclaimed the scariest film of all time. I read these things and all I can think is they are simply setting this film up for disaster at the box office, because it’s hard to believe a film could ever be this good.  Personally, The Exorcist is my favorite horror film. It’s stood the test of time, and while for audiences of today the film may not seem so scary, for me it was the notion of how it could all really happen that got under my skin.  As I came out of the screening of Hereditary and was scribbling some notes down about the film, I realized how desperately I wanted to rewatch this film to get a better grip on it. As more time as passed, I’ve found this movie has stuck with me for the past week for a variety of reasons, and while I’m not ready to call this film a masterpiece, I can say that it is a film that has made an impact on me that I haven’t experienced for some time.

While Hereditary is being embraced as a horror film, the strength of this film comes from the very real family dynamic we see at the start of the film as we watch them as they deal with the loss of Ellen, the family matriarch.  Ellen’s daughter Annie (Toni Collette) Graham is doing her best to keep her emotions in check as she goes through the motions from the funeral service to their return home where Ellen had stayed with them.  Steve (Gabriel Byrne) plays the part of the dutiful husband who does what he can to support his wife while also looking out for the kids. Then there is their eldest son, Peter (Alex Wolff), who is your typical teen who enjoys smoking pot, and then there is Charlie (Milly Shapiro), their daughter, who had a close relationship with Ellen, though it’s a bit difficult at times to see how she is struggling with the loss of her grandmother.  While there are other characters who come in and out over the course of the film, the focus is on the core family unit, which was a smart play.

It’s when we see Annie sneak off to a support group that we get a better grip on what she’s dealing with mentally and emotionally as she unravels a bit when discussing growing up with her mom.  They don’t paint a pretty picture when it comes to the kind of mother Ellen was, but it is evident that there is some emotional and mental damage that has been brought upon Annie, especially in a moment she tells a story about a time she went sleepwalking and found herself in her children’s room.  It’s moments like this that stuck with me, where something as simple as sleepwalking can be disturbing, but as the film progresses the terror ramps up slowly and in an unexpected fashion.

From the trailers we get to see Charlie being depicted as a simply a creepy young girl, but really this is only scratching the surface of this character, and I can only imagine how many people will be clicking their tongues to freak out their friends after seeing this film.  As for Peter, while we see his character evolve over the course of the film, for me this is one of those performances that will hopefully ignite his career. He’s someone you can loathe and sympathize with all at once.  If anything, the character I seem to have any issue with is Steve. Byrne does an admirable job with what he is given, but when you stand this character next to the other three, I simply wanted more out of this guy, especially when things start to slide into the more supernatural side.

It’s hard discussing this film, because there is a surprise early on in the film that I didn’t see coming, and, well, hopefully it won’t get ruined before you get seated for this film.  The way grief is handled in this film is very honest and uncomfortable. For those who have had traumatic experiences or losses in your family, be warned this film may rip off a few emotional band-aids along the way.  This brings me back to the use of the work “scary” to define this film.  I would say a better word to describe it is “horrifying”. This isn’t a film going for cheap thrills or jump scares; this is a film that will have you wanting to reach out to your loved ones and embrace them.  This film scratches the surface of your inner fear and relentlessly cuts deeper into the Graham family so that it will leave an emotional mark.

First time writer and director Ari Aster really has accomplished something special here.  The skill with which he handles the family drama and the supernatural elements of this film is something that veteran filmmakers have struggled with, and yet he makes this work so smoothly and easily.  This is a film that will easily make Aster a rising star in the industry, and it has me wondering just what he will tackle as his next project.  Sure, the film runs 2 hours and 7 minutes, but for me it didn’t drag. I was sucked into this film from start to finish, and if anything, I wish the final act of the film had been a little longer.

Then there is the performance from Toni Collette.  She has been an actress I’ve liked for years, but she’s never quite had that role that really could take her to the A-list, where I feel she belongs.  Hereditary is that film that will be her legacy, and it is an amazing performance that is beautiful and haunting.  There is a moment in the film where she is at the dinner table and one of her children asks what is wrong. What follows is a remarkable performance that is filled with rage and heartache that felt so genuine that for a moment I was genuinely lost in the film.  Usually when I feel like this, it’s because of the atmosphere and the story that has sucked me in. This is the first time in a while that a performance was so good that it had me sucked in.

I love this movie, and I’m curious to see how this does at the box office.  This is a film I feel would have been stronger in the fall around awards season, because this film is clamoring for award attention.  Sure, this film may not be for everyone. It’s a slow burn, and it’s not often that a slow-burn horror can equal financial success, but I believe Hereditary could be the film that can bridge the art-house crowd with the horror fan base and be the season’s sleeper hit.

Brent Lorentson is a horror writer and film critic based out of Tampa, Florida. With a BA in Digital Film, he co-wrote and co-directed Scavenger Hunt. His short stories have appeared in various horror anthologies. In 2019 his short script Fertile Blood will be a part of the anthology horror film Slumber Party. He is currently working on his first novel A Dark and Secret Place set to be released in late 2019. Favorite Films: Taxi Driver, Fight Club, I Saw the Devil, The Wild Bunch, Dawn of the Dead, A Clockwork Orange, Pulp Fiction, Heathers, The Monster Squad, and High Fidelity.
Hotel Artemis Ocean’s 8