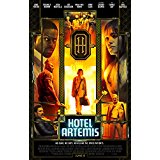 “Plenty of people out there to patch up the good guys…”

We’ve definitely gotten more than our fair share of movies and TV shows focusing on the lives of heroic doctors who heal common folk. Heck, even superheroes have someone like Night Nurse to tend to their more serious nicks and bruises. But what about less savory fictional characters…aren’t big screen bad guys entitled to quality health care too?! Hotel Artemis, the star-studded directorial debut of screenwriter Drew Pearce, answers that question with flair and the appropriate playfulness.

Hotel Artemis is set in 2028, where the city of Los Angeles is being ripped apart by riots. (I guess that sort of thing is cyclical out there.) The story takes place during one particularly eventful evening. We meet a pair of bank robbing brothers (Sterling K. Brown, Brian Tyree Henry) in the midst of a heist. Things don’t go very smoothly, and one of the brothers is forced to exercise his membership in a very exclusive club.

The brothers make their way to Hotel Artemis, a secret hospital/emergency room that caters to crooks. Hotel Artemis is run by the Nurse (Jodie Foster) with help from massive orderly/health care professional Everest (Dave Bautista). Other Artemis guests on this particular night include loudmouth arms dealer Acapulco (Charlie Day) and sultry, enigmatic assassin Nice (Sofia Boutella). The Nurse is a stickler for the Artemis’ rules, which include no names (the brothers are subsequently dubbed “Waikiki” and “Honolulu”), no weapons, no insulting the staff, and no harming other patients. But when a non-criminal from the Nurse’s enigmatic past appears at the front door seeking medical attention, the ultimate stickler has to decide if she’s willing to break the hotel’s rules herself.

“Rules? Without the rule breakers, honey, where would you be?”

There’s a *lot* of chatter about “rules” in Hotel Artemis, which is one of the reasons this film has drawn comparisons to the assassins-only Continental hotel from the John Wick franchise. (By the way, The Continental is slated to be the focus of its own TV show.)  Pearce, who wrote the script in addition to directing Hotel Artemis, intentionally keeps the frustrated and rioting lower-class masses on the fringes of the story. But when the hotel’s underworld proprietor — a crime boss known as The Wolf King (Jeff Goldbum) — needs to swing by the Artemis, it is a healthy reminder that rich people (even crooks) operate under a different set of rules.

Unlike the Wolf King, Hotel Artemis isn’t working with an unlimited, summer blockbuster-level budget. Pearce cleverly covers for any potential shortcomings by setting almost the entire story in a single location and draping it in the futuristic noir style of Blade Runner. After the botched bank heist at the beginning, the movie largely holds back on the action until the climax, where all the dangerous patients’ competing agendas collide. In between, the movie sprinkles in cool high-tech touches like a 3D-printed liver and an Uber that offers helicopter rides.

On the other hand, you can definitely tell that this movie was directed by the person who wrote it. (Pearce co-wrote Iron Man 3, and created the British superhero sitcom No Heroics.) The Wolf King’s impending arrival at the Artemis is dramatic and dangerous enough on its own, but Pearce feels the need to give practically everyone else at the hotel a personal (and contrived reason) to fear or want to kill the crime boss. I get wanting to give each of the characters emotional stakes, but Hotel Artemis goes a little too far out of its way to accomplish this.

But that’s a relatively minor complaint in what is a zippy, thoroughly enjoyable ride. It’s especially fun to watch Foster, in her first on-screen role since 2013’s Elysium, and be reminded that she’s really good at acting. Her Nurse speaks in a no-nonsense, rat-a-tat manner that matches the speed with which she stiffly runs around the Artemis. (Foster has been aged-up for this role, which makes me think Pearce had a considerably older actress in mind when he created the character.) The actress even sells the Nurse’s requisite tragic backstory, which feels a little out of step with the movie’s more cartoonish elements. Fortunately, Pearce recruited actors as great as Foster and Brown (the reigning Best Actor in a Drama Series winner for This Is Us) to help sell their characters’ emotional connection. Brown’s Waikiki is smooth and soothing, but can’t escape his troublemaking brother’s influence the same way the Nurse can’t force herself to go outside and escape the Artemis.

The rest of the cast is a blast. Bautista carries over the shockingly great comedic timing he’s honed in the Guardians of the Galaxy movies to play another wisecracking giant here. Day’s abrasive motor-mouth delivery is a nice contrast to Boutella’s detached deadliness. Goldblum, who really has become the new Christopher Walken in terms of showing up in movies to play his quirky self, adds a hint of menace this time around. And I haven’t even mentioned Zachary Quinto’s wild-eyed turn as the desperately overcompensating son of the Wolf King.

Although it obviously cribs from a variety of sources, Hotel Artemis is one of the few original offerings in a summer that is characteristically stuffed with superheroes and sequels. It’d be a shame if this stylish, well-acted film fell through the cracks. As the movie hits theaters, here’s hoping it’s a “busy night at the Artemis.”