Will and Grace: The Revival Season One 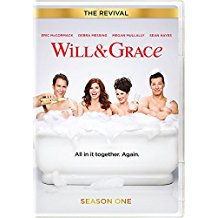 It’s been eleven years since that cast and crew took their final bow on the show Will and Grace.  In those eleven years so much has occurred such as gay marriage and the rise of the social justice warrior.  Just one glance at our political climate these days you can imagine there is plenty of material for comedy gold, heck there was even the revival of Roseanne that attempted to seize the moment.  But of all the shows that are on the reboot and revival trend train Will and Grace is the one sit-com I feel is the most suited to take the airwaves. A lot of time has passed, a decade in Hollywood is a few eternities and would seem to be an overwhelming task to reunite the cast and crew but it would seem the stars have aligned for this show but will it actually work?

When we catch up to Will (Eric McCormack) and Grace (Debra Messing) it’s been eleven years and still their relationship is as strong as ever.  Grace is recently divorced and in need of a place to stay so it’s at Will’s doorstep where she ends up.  Will is still a lawyer and Grace has become a successful interior designer with Karen (Megan Mullally) as her partner.  In case you were wondering Karen is still rich, drunk and as fabulous as ever as she uses her connections to get Grace the gig of redecorating The Oval Office.  The first episode works well at catching us up with everyone and getting the character riled up about their political beliefs and there was a point that I got worried that this could be all the show would be.  Thankfully there is so much more the show has to offer.

Don’t worry they didn’t forget about Jack (Sean Hayes) who continues to be the scene stealer throughout this season.  Jack has a lot going for him this season as he has difficulty coming to grips with getting older, even at one point discovering that he is now a grandfather to a boy who may or may not be gay. As the season progresses and Jack teaches acting to young kids, he not only gets the opportunity to final act on a television show (where a certain big name actress makes an appearance) but it seems Jack may also be ready to settle down.

Sadly who is missing from the show is Rosario (Shelley Morrison) who was always Karen’s verbal sparring partner.  The does address this and gives the character a fitting farewell and this does result in more than a few touching moments from Karen.  But just because Rosario isn’t around there are plenty of characters for Karen to abuse.  One of my favorite episodes involves Will and Karen bonding over her spying on her staff and them discovering that there is a brewing romance with her kitchen staff.

As for the relationship between Will and Grace, despite them being the main characters of the show I was always more so a fan of Karen and Jack.  The characters of McCormack and Messing undoubtedly have some great chemistry and it’s impressive how well it has held up over the years, in a strange way I actually like seeing them onscreen together more so now than I did in the past.  I like seeing these two as they struggle with their life as they are approaching their fifties but seem to be finally realizing that they don’t need relationships to be happy since they have one another.

The playful dialogue and the physical humor are the shows strong points; I can definitely see and agree with people comparing the Will and Grace relationship to Lucy and Desi but for a new era.  As an added bonus what further helps this season’s success are the special guest appearances over the course of the season.  Many of the appearances are from numerous characters we got to meet over the years but there are also plenty of new surprises as well.  I really want to squeal on a couple of these appearances but really it would take the fun out of it.

Season one of the revival has 16 episodes and with the way the season ends there seems to be plenty of material to keep the show going without ever feeling as though the ideas have gone stale.  While I wouldn’t say this is my favorite sit-com, this is definitely one of my favorite revivals that has potential to be something really great.

Added onto the DVD set we get a gag reel but the extras that are really worth giving a watch are the segments Reuniting the Team and Back to the Beginning.  These features are a good pairing, how one basically gives the entertaining story with how the revival actually came together, while the other discusses how the show even got started to begin with.  Then we get the extra Classic Comedy that discusses the shows style and how it has the formula of many of the classic sit-coms from the black and white era.

Whether you’ve been a fan of Will and Grace from when it first premiered filling the timeslot of Mad About You or you are simply a new viewer thinking about giving this a shot, Will and Grace is definitely something for just about all audiences. Not every revival is needed but this is one that has come along at the right time to be a springboard for discussion about issues that we surprisingly seem to be still having difficulty having.  Out of 16 episodes there are really only 2 episodes that seem to get hung up on politics.  While I can appreciate a show that wants to tackle issues I understand many others simply want to just enjoy a few laughs and not be preached to.  Will and Grace manages to successfully sneak in its message while delivering laughs and plenty of heart to its viewers.  It may not be perfect but there isn’t a better time than now for this show.

Brent Lorentson is a horror writer and film critic based out of Tampa, Florida. With a BA in Digital Film, he co-wrote and co-directed Scavenger Hunt. His short stories have appeared in various horror anthologies. In 2019 his short script Fertile Blood will be a part of the anthology horror film Slumber Party. He is currently working on his first novel A Dark and Secret Place set to be released in late 2019. Favorite Films: Taxi Driver, Fight Club, I Saw the Devil, The Wild Bunch, Dawn of the Dead, A Clockwork Orange, Pulp Fiction, Heathers, The Monster Squad, and High Fidelity.
Tuesday Round Up: June 19, 2018 Pacific Rim: Uprising