Posted in: Disc Reviews by Brent Lorentson on June 19th, 2018 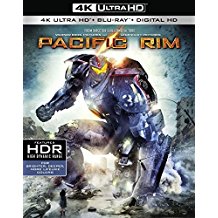 When Pacific Rim first came out, I had a blast with the film.  It was the ultimate giant-monster-versus-giant-robot film that my inner ten-year-old has wanted to see for so long.  Sure, the film had some dialog issues, but the world that Guillermo del Toro created with the film was so over-the-top and beautiful that the bad dialog was easy to forget.  It knew what it was, brainless eye candy, and it delivered in a big way. Now we have the sequel coming out; del Toro is no longer at the helm, and in his place we have Steven S. DeKnight whose previous directorial efforts have been episodes from Daredevil and Dollhouse.  Does the sequel hold up?  Well, to put it bluntly, not even close.

John Boyega has been an actor I’ve appreciated since I first saw him in Attack the Block. Seriously, if you haven’t seen Attack the Block yet, stop wasting time and see this immediately. While I’ve enjoyed seeing him in the new Star Wars films, I just feel he’s an actor who hasn’t gotten the appreciation he deserves, and for a while when I saw he was going to be in Pacific Rim: Uprising I had hopes that this could be the film that put him over the top.  He comes into Uprising playing Jake, the son of the famed hero of the jaeger/kaiju Stacker Pentecost who was played by Idris Elba.  He wants nothing to do with that legacy and instead has become a thief in the world that is still in ruins from the kaiju attacks that occurred ten years prior.  It’s while he is trying to steal tech from an old jaeger that he runs into Amara (Cailee Spaeny), who is stealing jaeger tech of her own so she can finish building one herself. The two, though, are eventually caught, and instead of serving jail time the powers that be decide to send them to Top Gun…I mean jaeger training.  How this makes any sense is a stretch at best, but this is a movie about monsters the size of skyscrapers, so logic I suppose should really be left at the ticket counter.

Seeing Jake and Amara at the school seems like recycled filler from the first film that just isn’t needed.  We see Jake with his former drift partner, Nate (Scott Eastwood), but how they are working together seems to go against the whole idea of drifting.  For those who forgot, it takes two pilots to control a jaeger, and to successfully fight and use one they need to work together as one through the drifting process, but Jake and Nate seem so different that it’s hard to imagine how they could ever work well as a team.

There is a group that opposes the jaeger program and has decided the best line of defense is to create drones rather than train kids to pilot the jaegers.  While the idea of drone warfare being incorporated into the jaeger fights is cool, this unfortunately is not explored as much as I would have hoped for.  Yes, we do get to see a jaeger go rogue, and we get a fun fight in the process, but once it is discovered who and how the machines are running, well, this is another issue I have with the film.  This brings us to the film’s ultimate villain. This could be considered a spoiler, so I won’t say who or how this occurs, but I will say this may be one of the worst villains I’ve seen on the screen in a long time.

When the final fight gets going, I have to say it had a fun start, but then it kept going and going. Yeah, I’m all for an epic showdown, but it seems like it was simply an excuse to destroy things rather than give us a fight where anything was really on the line.  The first film it was all about life or death for the sake of mankind. This time the fight just doesn’t carry the same amount of emotional weight.

A good portion of this film seems like it was made more to please younger fans of anime than to excite fans of the original film.  Shifting towards a much younger cast seems to show that they were aiming to be more of a kids’ film rather than follow in the footsteps of the first film.  I miss the bad-assery of Ron Perlman’s character and the underground kaiju trade that occurred in the first film.  I loved how society seemed to have to adapt to survive and how people were exploiting the underground trade and safety bunkers you could hide in during a fight.  It’s as though all this has been forgotten.  Even the effects just don’t hold up to the first film. Gone are all the unique quirks of the jaegers, and instead they all just look like generic transformers with swords. It’s just lazy.  Gone are all the parts that basically made Pacific Rim more than just a simple giant-monster fight-fest.

Pacific Rim: Uprising  is presented in an aspect ratio of 2.40:1. The Ultra high-definition 2160p  image is arrived at by an HEVC codec with an average bitrate of over 65 mbps. The high definition image presentation gives you a lot to be happy about here. The heightened level of detail give you a pretty sweet look at both monsters and robots. The f/x blend rather flawlessly. It’s when the HDR kicks in with both vibrant color and increased contrast that things turn really sweet. The film makes use of tons of colorful light effects. We’re talking glowing weapons, control boards and the sparks of life in the robots themselves. These colorful lights pierce through inky blackness to create sharp stunning displays. The neon blue of alien blood also stands out in much the same way. All of this is possible with nice deep and rich black levels. Shadow detail is quite fine here. Explosions deliver bright plumes of orange/red fireballs.

The Dolby Atmos presentation defaults to an aggressive 7.1 track. From the very start it’s the subs that kick in full force. The effect gives these digital creations substance and power. The surrounds kick in with tons of immersive ear candy. The creaking of stressed metal and that organic/metallic ticking sound that is also common in the Transformers films. The score has some sweeping emotional cues. The dialog maintains its presence throughout just fine.

Deleted Scenes: (6:57) There are 8 with a play all option. You also get an optional commentary by DeKnight.

Hall Of Heroes: (3:25) John Boyega introduces us to the new Jaegers and their weapons and design.

Bridge To Uprising: (4:39) The input here comes from DeKnight, Boyega and Eastwood. They talk about the changes the 10-year on-screen gap had on this world. There’s plenty of behind the scenes footage, concept art and f/x layers to accent the subject.

The Underworld Uprising: (3:47) Profiles of the Jake and Amara characters and their relationship.

Becoming Cadets: (5:58) Meet the multi-national teen cast members who play the film’s cadet class. Get a look into how they trained and bonded for the shoot.

Unexpected Villain: (5:47) THIS IS A MAJOR SPOILER FEATURE! The focus is on the film’s character twist which I won’t reveal here.

Next Level Jaegers: (5:08) Of course, we have to have a feature on the robots. You get plenty of behind the scenes footage along with concept art and pre-viz.

Going Mega: (3:21) This one looks at the three monsters and their joining for the huge monster in the climax.

Secrets Of Shao: (3:14) A profile of the character and her pivotal corporation.

Mako Returns: (2:40) A look at the return of the character from the first film.

I wanted to like this, but I just can’t look past how disappointing it was.  Sure, kids will like it for the eye candy, but it’s nothing more than a glossy cartoon without heart. It looks like they are setting up for another sequel to Pacific Rim, and if that is the case, please let it be closer to the source material and not more of this.

Brent Lorentson is a horror writer and film critic based out of Tampa, Florida. With a BA in Digital Film, he co-wrote and co-directed Scavenger Hunt. His short stories have appeared in various horror anthologies. In 2019 his short script Fertile Blood will be a part of the anthology horror film Slumber Party. He is currently working on his first novel A Dark and Secret Place set to be released in late 2019. Favorite Films: Taxi Driver, Fight Club, I Saw the Devil, The Wild Bunch, Dawn of the Dead, A Clockwork Orange, Pulp Fiction, Heathers, The Monster Squad, and High Fidelity.
Will and Grace: The Revival Season One Death Wish (2018) (Blu-ray)