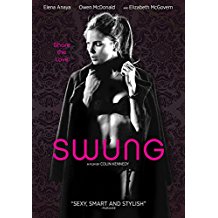 It goes without saying this film is not suitable for children. Swung is a film in the vein of the 50 Shades of Grey franchise; however, where those films focused on BDSM, this film is centralized along swinging, or engaging with multiple partners. Brace yourself, because you will definitely see more than you think you will in this unrated movie. Granted, it is not just all about sex. The primary focus is the relationship between our two lead characters and the strain and struggles that they are encountering. In this regard, Swung was relatable, as it addresses intimacy, custody matters, and the difficulties of unemployment. Starring Elena Anaya and Owen McDaniel as the couple, they serve as our eyes into this dark world that will possibly change their relationship forever.

Alice and David are very much in love and committed to one another, but the spark has gone out in their sex life. Being without employment and unable to meet his child support requirements, coupled with only being able to see his child on rare occasions have diminished David’s ability to satisfy Alice. Alice does her best to be supportive, but after discovering a particular kind of voyeuristic content on David’s laptop, begins to wonder if the issue is her.  Determined to make the relationship work, Alice attempts to take part in this activity with David. After a chance encounter with another couple, things suddenly change, and the spark is instantly relit.

As they say, “When you look into the abyss, the abyss looks back at you.” That quote perfectly encompasses this film in my opinion, as it serves to show the position our couple find themselves in. You have to take the good with the bad in this world. Yes, this kind of activity brought them closer together at first, but this kind of thing requires a person who is completely secure in themselves and their relationship. That was not our couple; insecurity abounded from the first frame, with David being in a transitional period and his life and Alice wondering if David still desired her the same way he did when they first met. I credit both actors for being able to convey as much emotion during the serious moments as during the sexual scenes. They both were very comfortable in their roles, even if I was uncomfortable observing them. I don’t think of myself as a prude, but as I said earlier, you will see some things that you weren’t expecting to see.

The film is relatable, as I can see the correlation of a couple experiencing these kinds of troubles would seek an outlet.  In regards to the content, bold is the only word that comes to mind. This is not my usual forte, but I will admit that there is more to the plot than just sex; there is substance that made its viewing worthwhile. There is also chemistry between the two leads as they brought life to two characters that could have easily been one-dimensional.

Key takeaways are that Swung is more than just a sex film; it tackles real life matters that can occur in any relationship. Elena Anaya and Owen McDaniel keep the plot from becoming stale with their lively performances and emotional range. Finally, if you are going to watch this, be prepared for all the adult content that you are going to see.

Jeremy Butler is a film school graduate of the International Academy of Design and Technology. He is been writing for Upcomingdiscs since 2012; however, movies have played a big part of his life for much longer. Favorite genres include horror, science fiction/fantasy, and comedy. Favorite movies are V for Vendetta, Boondocks Saints, Kiss Kiss Bang Bang, and The Godfather.
Ready Player One (UHD Blu-ray) (4K) National Parks Adventure (UHD Blu-ray) (4K)