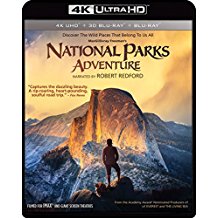 “Wildlife and its habitat cannot speak, so we must, and we will” – Teddy Roosevelt.

Actually they do speak for themselves, and Shout Factory’s UHD/4K release of National Parks Adventure gives that wildlife plenty of grand opportunities to speak to us through the grandeur of the American National Park system. Last year Shout Factory showed us what the UHD/4K format could really deliver by releasing a series of IMAX films in the new format. It was a bold move that has really paid off. IMAX cameras utilize 65 and 70mm film, which offers source material that is actually much higher resolution than 4K. Unlike many recent digitally shot films which tend to be done in the neighborhood of 2K, these films have a film element as high as 8K. There’s been a gap in the Shout Factory IMAX releases, but I’m happy to report that they’re back with two new films.

Robert Redford lives in Utah these days because of the sheer number of National Parks in the state and vicinity. That makes him quite a spokesman for these untouched places and as natural a choice as narrator as the places themselves. While Redford doesn’t really deliver a dynamic narration, you can really feel the passion in the voice, as reserved as it is. It’s actually a good way to let the sound of these places speak for themselves. Unfortunately director Greg MacGillivray didn’t use that same thinking for the rest of the audio design of this film.

The music is quite invasive. It’s often loud and intrudes on the quiet and peacefulness of the places we get to visit in this documentary. The film is much better when he allows us to drink in the natural sounds as well as the natural beauty of these almost sacred places.

The film points out that America is too young a nation to have some of the wonders of the ancient civilizations that you find throughout Europe and Asia. These thousands-of- years-old monuments from Egypt to Rome attract tourists by the millions to witness their splendor. We don’t have that here, but thanks to Teddy Roosevelt who created the National Parks system, we have untouched natural splendors that can take us back in time millions of years.  This documentary covers the early exploits of Roosevelt and the camping trip he undertook with conversationalist John Muir that inspired him to set aside so much of the continent’s natural wonders.

The film also follows the exploits of a modern trio of climbers as they travel to the various parks depicted here. Unfortunately, it often limits the experience to their climbing activities, which give us some wonderful images, to be sure. But it somewhat limits the experience to parks with that kind of activity available to visitors. That means parks like the Everglades get a rather short look, because there really isn’t much to climb here in Florida that doesn’t come equipped with stairs. The bulk of the time is spent in places like Yosemite, Crater Lake, and the Grand Canyon. One of the more interesting is a visit to Northern Michigan in the winter where our climbers ascend frozen waterfalls. It’s not the climbing that amazes so much as the sheer beauty of the frozen water and a cavern of ice that lies on the inside.

There’s not a lot of wildlife on display here. Most of the footage is of various locations in the parks, and, of course, our climbers and even a bike team. The notable exceptions are bears catching jumping salmon at a waterfall, prairie dogs, and a nice shot of a gator from water level. You’ve never been so close to these animals even if you do visit the parks.

The human elements take away too much time from the 43 minutes we get to spend in these places, but there is still so much beauty to take in during the time that is devoted to incredible aerial shots and the sheer magnificence of these temples of nature. This is as close as you will ever get without actually making the trip. I suspect the film will fulfill its obvious intention to encourage those who view it to take the time and visit these places for themselves.

National Parks Adventure is presented in a modified aspect ratio of 1.78:1. The ultra-high-definition 2160p  image is arrived at by an HEVC codec with an average bitrate of 65 mbps. What can I say? The IMAX source material offers some of the best images of these parks that you will ever see without actually being there. The release offers both an SDR and HDR presentation, but you simply must watch this in the full colorful glory of HDR. It’s not just the beauty and incredibly vibrant colors. It’s the ability to show nuance in the various shades of red in the Grand Canyon bedrock. Don’t get me started on the various bodies of water. You won’t believe the different shades of blue and green to be found here. Old Faithful exhibits glowing green bacteria that is as breathtaking as the geyser itself. The image is crystal clear at all times. The biggest flaw here is a victim of the aspect ratio modification. There are moments where the image is badly distorted by the forced ratio. I’m not sure why the film wasn’t presented in its original form.

The Dolby Atmos can be quite sweet at times. But too often the loud songs intrude horribly on our immersive experience. I understand the intent was to add some emotion and a little exhilaration to the audio design, but MacGillivray should have trusted the natural sounds to do that for us. At least offer that as an alternative. When nature is allowed to speak for itself, it is as immersive as it gets. Wind, water, and birds carry us to these places just as easily as the awesome images. Unfortunately, we don’t get many opportunities for that to happen.

The extras are on both discs. The Blu-ray disc also offers a 3D version of the film. All you get are eight very short pieces that average under two minutes each. That also includes a repeated intro that runs about 20 seconds of that time. It’s mostly added footage and some demonstration of the shooting logistics along with a very short chat with Redford.

I’m happy to see Shout Factory return to these releases. I know it’s a small and limited audience, but these films can do things in UHD that more commercial films just can’t deliver. IMAX and UHD are made for each other. Shout delivers “Another American Icon”.

Gino Sassani is a member of the Southeastern Film Critic's Association (SEFCA). He is a film and television critic based in Tampa, Florida. He's also the Senior Editor here at Upcomingdiscs. Gino started reviewing films in the early 1990's as a segment of his local television show Focus. He's an award-winning recording artist for Omega Records. Gino is currently working on his 8th album Merchants & Mercenaries. Gino took over Upcomingdiscs Dec 1, 2008. He works out of a home theater he calls The Reel World. Favorite films: The Godfather, The Godfather Part II, The Body Snatcher (Val Lewton film with Karloff and Lugosi, not the pod people film), Unforgiven, Gladiator, The Lion King, Jaws, Son Of Frankenstein, The Good, The Bad And The Ugly, and Monsters, Inc.
Swung Blindspotting