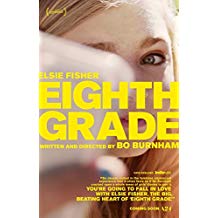 A cool little film with a lot of mixed messages, Eighth Grade tells the story of a young girl entering her teenage years. Nicely acted and directed, the movie works on the heartstrings and leaves you with a feel-good sentiment. If you can remember the years when your next step would be high school, you may be surprised by the film that very little has changed. There’s one more week of eighth  grade, and Kayla Day (Elise Fisher) finds herself full of angst mixed with hope as she deals with what she leaves behind and looks forward. A lot is taking place including her last band practice, Kennedy’s birthday swim party, and upcoming High School Shadowing Day.  It’s also the announcement of class superlatives that precedes graduation day.

But all that means less to her because she’s totally immersed in her YouTube blog and hoping that her viewers are listening. Her topics are solid recommendations and include the most important of them all, “Being Yourself.”  While she preaches as if she does things her blogs advise, she’s often too shy to live them herself, like “Putting yourself out there” and “How to be confident”.  What does affect her are a want to be noticed for who she is, getting a boyfriend, and having a perfect person to shadow with at the upcoming High School Shadowing Day.

This is director and writer Bo Burnham’s first feature film at the helm, and he does a very good job on his screenplay. He uses relative unknowns in the major roles, guiding them through how the characters work to make the film believable.  Putting eighth grade up on the screen can be very difficult, because it’s the year that most kids who have worked on a different level are now trying to fit into the round hole with their square peg. It’s their time to figure out how to hone the edges into as much roundness as they can to fit into a world of kids who have already experienced the new playing field. It’s a very cool plot, and Burnham hits a home run.

Back in the day when America was worried about the Russians, we learned new phrases like “duck and cover”. Well, in today’s world, the threat is already here. And there’s a scene in the film that will call that to mind. Director Bo Burnham introduces the new wave of instruction against shooters entering schools.  It’s a downer that cools things off a bit and becomes more of a distraction than a message.  That said there are several other messages that take center stage including being overweight, anorexia, and cliques.  But after all, it is middle school, and that’s where the trek to adulthood really begins.

For her first starring role, you would think Elsie Fisher a pro as she nails her role as the acne-faced, overweight, puberty-driven eighth-grader. She shows that Kayla is on the clock for the next big step in her life. Her first giant step was entering middle school, and that got her the superlative after three years of “Quietest” student at her school. Elsie works her character well even though in real life she’s two years older. She has the walk down pat.  You know, stooped shoulder and taking two steps to everyone else’s one. She makes her audience believe, and that’s what a good actress does.

A nicely made movie that captures inquisitive minds.

John Delia has been on all sides of the movie business from publicity, writing for publications and on line blogs, script writing, to film making. Writer, critic, film editor he has worked as a film critic on this second go around for 14 years. He earned his Bachelor’s degree at the college of Journalism and Communications at the University of Florida in Gainesville, Florida. John is an active member of the Southeastern Film Critics Association (SEFCA) . Favorite Films: Lord of the Rings/Hobbit trilogies, The Godfather trilogy, the Indiana Jones trilogy (I didn't like the 4th), The Avengers and for TV it's Game of Thrones. As for animation it's a tie between anything Pixar and everything Hayao Miyazaki.
Blindspotting Mission Impossible Fallout