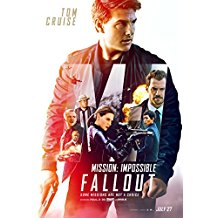 “Your mission should you decide to accept it. Isn’t that the thing?”

And that has been the thing. Since 1966 Mission Impossible has plotted out nine seasons of television and six movies, thrusting Tom Cruise into an action hero icon. Cruise and company have taken their time with these films. It’s been over 20 years, and we’re only on the sixth entry. For the first five films, each of the Missions have been directed by a different director, from John Woo, who directed the second and worst of the films, through J.J. Abrams, who turned the ship around with the third, which was also his first feature film, to Christopher McQuarrie, who becomes the first director to repeat in the series of films. In fact, McQuarrie has become quite the Tom Cruise collaborator these days, also directing his Jack Reacher film and writing his version of The Mummy. Mission Impossible: Rogue Nation and now Fallout offer a nice apology for the train wreck … or was that a plane wreck … that was The Mummy. The fact remains that this is the one rare franchise that appears to be getting better with each outing.

Mission Impossible: Fallout begins with a familiar theme in the film franchise. And no, I’m not talking about the iconic Lalo Schifrin music. That comes later. The familiar theme here is a mission that goes badly. Hunt (Cruise) decides to save Luther Stickell”s (Rhames) life and let some stolen plutonium slip through his fingers. The botched mission calls his ability into question, and once again the IMF team is on the bubble and Hunt must take his team rogue to make up for the mistake. The film brings back a couple of earlier threads from previous films. With the exception of a few characters, none of the films included this kind of continuity before. Back on the team is Simon Pegg’s Benji, who finally gets to wear a mask, which has been a bit of a running gag since the third film. Alec Baldwin returns as “The Secretary” Alan Hunley. Renner couldn’t make the film because of Marvel commitments.

Michelle Monaghan returns as Hunt’s once-thought-dead wife. Her new life gets disrupted by the new mission. That’s because we also see the return of one of the franchise’s better bad guys, Sean Harris as Solomon Lane. He’s been a prisoner since he was captured and traded from nation to nation for the intel he can provide. Now the cost of getting back the plutonium is freeing the arch-villain. Of course, that’s going to get a bit complicated, and you can never tell how much of Hunt’s movements are being manipulated by the old head of the dangerous Syndicate. Back again from that previous plot is ex-MI6 agent Ilsa Faust, once again played by Rebecca Ferguson, who gets some of the coolest stuff to do once again. She continues to be hell on wheels with a motorcycle, and you can count on more high-speed action on the highways with some of the most elaborate car chases you’ve yet seen.

If all of that makes this film sound like a retread, nothing can by farther from the truth. Henry Cavill enters the franchise as CIA Agent August Walker. His participation led to the rather silly million-dollar-mustache-removal debacle in the Justice League film. His boss is played by another newcomer to the franchise in the form of Angela Bassett as the head of the CIA. Throughout the film we’ll have cause to question their motives, because once again the film features the requisite mole in the operation. On second thought, a lot of this film is a bit of a retread. But what it lacks in imagination and plot holes big enough to sail a starship through the film makes up with imaginative visuals.

Mission Impossible has strayed from the television model pretty much from the start. Over the years the films have been showcases for Tom Cruise to do ever-escalating stunts. This time it caught up with him, and Cruise was injured on the set. He likely thinks it was worth it, because the stunts continue to get better with each movie. The best here include a long and incredible helicopter battle that leaves Cruise stranded on a high, sheer cliff. Of course, that heralds back to his climbing stunts that started the John Woo second film.

This could very well be the final film in the franchise. I say that because of how much looking back this film does. I don’t really think that’s the case, however. Fallout is likely the final big box office grab of the season and will have little competition for the foreseeable future. I predict it will make more money than any of the earlier attempts. Cruise might be in his 50’s, but he appears to be in great shape, and injury aside, it looks like he’s having a lot of fun. Renner’s character was once expected to take on the future lead in the franchise, but I suspect Cruise has at least a couple more of these in him. And that’s the real kicker in the film’s entertainment value. These guys look like they’re having too much fun, and they’re practically printing money while they play. That doesn’t sound like the end to me. The film not only gives us an immersive experience, but you really want to hang out with these guys. “I’m beginning to see why you guys enjoy this so much.”

Gino Sassani is a member of the Southeastern Film Critic's Association (SEFCA). He is a film and television critic based in Tampa, Florida. He's also the Senior Editor here at Upcomingdiscs. Gino started reviewing films in the early 1990's as a segment of his local television show Focus. He's an award-winning recording artist for Omega Records. Gino is currently working on his 8th album Merchants & Mercenaries. Gino took over Upcomingdiscs Dec 1, 2008. He works out of a home theater he calls The Reel World. Favorite films: The Godfather, The Godfather Part II, The Body Snatcher (Val Lewton film with Karloff and Lugosi, not the pod people film), Unforgiven, Gladiator, The Lion King, Jaws, Son Of Frankenstein, The Good, The Bad And The Ugly, and Monsters, Inc.
Eighth Grade Tuesday Round Up: July 31, 2018