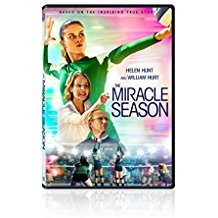 Sports movies have been something of a cliché for years now. And it’s not really a recent phenomenon. Everybody remembers Ronald Reagan appearing in Knute Rockne All American as the famous George Gipp. That was 1940, and Hollywood is still selling films that ask teams to “win one for The Gipper”. That’s exactly what you get in director Sean McNamara’s The Miracle Season. Substitute high school volleyball for college football, and you likely already know the story before you even order your popcorn and soda. Of course, even with established Hollywood formula and a well-trodden story, things are never quite that simple. Somehow the better films still tend to touch an emotional nerve, and when it’s all based on a true and inspiring story, well then, break out the Kleenex and try to keep the tears from diluting your already watered-down drink. Still, some of these films manage to stand out from a very crowded field. So what exactly does it take to do that, and does The Miracle Season have what it takes? That’s a little bit complicated.

The film begins with the story of two best friends. Caroline and Kelly have that special kind of bond, as the opening narration explains. We are treated to a montage of the close friends from young girls to adolescents who eventually find themselves teammates on Iowa City West’s volleyball team. In 2010 they took home the state championship, and hopes are high as the girls begin practices for the 2011 season. All of the hope and enthusiasm is delivered by Caroline “Line” (Yarosh). Her energy and drive are contagious, and it’s quickly evident why she’s the natural leader of the team and a favorite of Coach “Bres” Bresnahan (Hunt). Her cheerfulness is even more amazing when we learn that her mother is dying of cancer and unlikely to survive to see her daughter win a second championship. She still manages to stay positive and keep her mother and father smiling. She decorates her shoes to dedicate the new season to her mother and encourages her friend Kelly (Moriarty) into believing she can also be a team leader. With someone like Caroline pushing the team, that second championship appears in the bag.

Of course, things weren’t fated to work out that way, and Caroline dies in an off-screen accident that devastates the community. Without Caroline, there doesn’t appear to be any reason to play, and the team all but quits, forfeiting its first volley of games. No wins. No state championship, and all appears lost for the season. But Coach Bres isn’t about to give up, and she pushes Kelly to take the lead and bring the girls back. Obviously, it’s no spoiler here to tell you that the team takes on the slogan: “Win For Line” and embarks on one heck of a winning streak that brings them back to the state championship.

Yeah, all of this fits the formula quite nicely. But there are two things that make this film just a little bit better than most. “Win for Line” might as well be the old “Win one for the Gipper”. We’ve heard those lines in one form or another a few hundred times. What stood out for me was the attention paid to the pressure that kind of a slogan puts on the players. Who wants to be the one who lost the game and therefore failed The Gipper, or in this case, Caroline? McNamara allows that thought to dominate the middle part of his movie. One player asks that she not be fed the ball because she doesn’t want to be that person. Who would, and while it all sounds so nice and inspiring, most films fail to explore the dark side of such rally cries. That was far more interesting to me than the inspiring story itself.

The second outstanding element was the performance of William Hurt, who plays Caroline’s father. He has lost his wife and daughter within days, and Hurt delivers a powerful image of the anger and grief such losses must certainly create. Even though he’s touched by the team’s dedication, it’s also very difficult for him to be a part of it all, and who can blame him? It’s one of Hurt’s best performances in a long acting career. I should also give credit to young actress Danika Yarosh, who plays the ill-fated Caroline. Her time on-screen is necessarily brief, and her death is not dramatized by the horrific scene itself. Yet her performance is so vibrant that it’s easy to feel the spirit that inspired so many people in a community. Yarosh allows herself to be so quickly and completely unforgettable. Honorable mention goes to Jason Gray-Stanford, who plays the team’s assistant coach. Many of you will recognize him as the somewhat daft Randy from Monk. He’s got the tough task of being the rare guy in a film full of women.

The credit roll offers us some glimpses of the real people and footage of the emotional state championship. It was there and in the film where Neil Diamond gets a bit of a bounce in his long career because of his hit single Sweet Caroline. That stuff is always a nice touch, and most of the audience members remain to catch it.

Without those two elements, The Miracle Season is a film we’ve seen too often before. Yeah, I learned more about organized volleyball than I ever did before, but I’m still not likely to catch any games. We had an ex-student of the high school at our screening who announced that there was absolutely a lot of fudging in the story. Hollywood kind of insists on that. Those effects can be found throughout the film, from the rather starkly sterile environments (there’s literally no dirt in the film) through the montage approach of the winning streak. It’s a formula film with a couple of outstanding elements that make it worth a watch. “That is, if I’m not lying.”

Gino Sassani is a member of the Southeastern Film Critic's Association (SEFCA). He is a film and television critic based in Tampa, Florida. He's also the Senior Editor here at Upcomingdiscs. Gino started reviewing films in the early 1990's as a segment of his local television show Focus. He's an award-winning recording artist for Omega Records. Gino is currently working on his 8th album Merchants & Mercenaries. Gino took over Upcomingdiscs Dec 1, 2008. He works out of a home theater he calls The Reel World. Favorite films: The Godfather, The Godfather Part II, The Body Snatcher (Val Lewton film with Karloff and Lugosi, not the pod people film), Unforgiven, Gladiator, The Lion King, Jaws, Son Of Frankenstein, The Good, The Bad And The Ugly, and Monsters, Inc.
Counterpart: Season 1 (Blu-ray) The Darkest Minds